Diamonds Are a Girl's Best Friend: 13 Carat Bulgari Diamond to sell at auction

Diamonds Are a Girl's Best Friend: 13 Carat Bulgari Diamond to sell at auction

LONDON - Dreweatts & Bloomsbury Auctions present the opportunity to sparkle like an Oscar winning starlet with their sale of Fine Jewellery on Wednesday 26th March 2014, to be held at the auctioneers Donnington Priory Saleroom in Newbury, Berkshire. This outstanding sale features an array of divine diamonds, and other stunning stones, to seduce ladies of all tastes.

The show stopping highlight of the sale is unquestionably a single stone diamond ring by the Italian jewellery and luxury goods retailer, Bulgari. A sure fire way to set any lady’s heart fluttering, the brilliant cut diamond weighs an astonishing 13.68 carats and is claw set above baguette cut diamond single stone shoulders. Signed by Bulgari it is estimated to achieve £80,000 – 120,000. [Lot 408] Also from Bulgari, a stunning 1960s sapphire and diamond ring was a gift to the current owner from the famous Italian film maker Mario Monicelli. The Oscar-nominated director and screenwriter Monicelli was dubbed the ‘father of Italian comedy’ for such films as the 1975 hit Amici Mei (My Friends). He once said; “A comedy that is ironic, sometimes bitter, in some cases even dramatic, tragic: That is what Italian comedy is.” The gifted sapphire and diamond Bulgari ring is estimated at £6,000-8,000. [Lot 401] 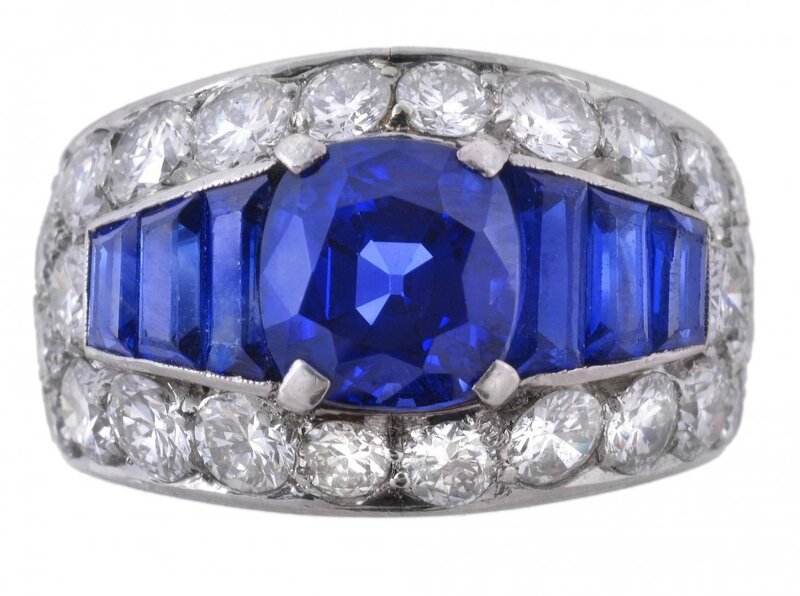 A 1930s Czechoslovakian Art Deco diamond and gem plaque brooch, from the estate of the British actress, Alexandra Bastedo, a classical Art Deco diamond lozenge centred with a large brilliant cut diamond of around 1.10 carats, in a pierced, almost Belle Epoque, frame. Bastedo or ‘La Bastedo’ as she was known in Europe was made famous by her role as secret agent

Sharon Macready in The Champions, a detective adventure television program which aired in 1968-69. The actress was married to British stage Director, Patrick Garland, part of whose library was disbursed through Dreweatts & Bloomsbury Auctions Godalming saleroom on Thursday 13th February 2014.

Stamped with the maker’s mark to the pin and brooch frame, and with a total weight of approximately 4.87 carats, the brooch is being sold to raise funds for the upkeep of her animal sanctuary, ABC, and is estimated to sell for £1,500 – 2,000. [Lot 223] A Czechoslovakian diamond brooch, mid 1940s, the pierced rectangular plaque with a central brilliant cut diamond, estimated to weigh 1.10 carats, in a millegrained collet setting, within a surround of millegrain set old cut and rose cut diamonds, control mark for Czechoslovakia, 3.3cm long From the estate of the British actress, Alexandra Bastedo, to be sold to raise funds for the upkeep of her animal sanctuary, ABC, in West Chillington, Sussex. Estimate £1,500 – £2,000. Photo courtesy Dreweatts & Bloomsbury Auctions

Much of the jewellery in the sale was sourced from private collections and estates across Europe, fresh to the British market, having been consigned through our office in Rome, where we hold regular jewellery valuations. Key jewellery ateliers including Cartier, Pomellato and Bulgari, along with fine period pieces have been discovered on these occasions, including sleek and stylish Italian agate and sapphire bowl by Alfredo Ravasco, circa 1940 – 1965.

The son of a Genoese goldsmith, Ravasco became famous during the 1920s for his exuberant precious stone boxes and objects which encompassed his signature style, a perfect balance of the extravagant and the minimalist. His list of prestigious clients included the Royal House of Savoy, and he is known to have created presentation brooches for the Princess of Piedmont, later Queen Maria José of Italy. He was one of only a few Italian jewellers to have exhibited at the 1925 International Exposition of Decorative Arts in Paris, and later went on to exhibit in New York in 1928 and Athens in 1931. The bowl is estimated to sell for £1000 – 1500. [Lot 227] An Italian agate and sapphire bowl by Alfredo Ravasco, signed 'A. RAVASCO' to the foot rim, the oval agate bowl with a cluster of circular cut sapphires to the handles, on a wooden plinth, 9.2cm (3 5/8in) long Alfredo Ravasco (1873-1958) was a Milanese jeweller who exhibited from 1908. He exhibited his form of Art Deco at the Biennale of Decorative Arts, Monza in 1923 and in Paris in 1925. He produced flat and geometric pendants and bracelets as well as objects of vertu such as boxes, vases and bowls in malachite, onyx, jade and other hardstones Literature: Venturelli, Paola, "Alfredo Ravasco", Milan 2003, see p. 97 for an illustration of a similar agate bowl with the same sapphire handles. Estimate £1,000 – £1,500. Photo courtesy Dreweatts & Bloomsbury Auctions

The auction will be held at their Donnington Priory Saleroom in Newbury, Berkshire, with public viewing in the Dreweatts & Bloomsbury Auctions London saleroom in the heart of Mayfair, from Monday 17th – Wednesday 19th March. Online bidding with no additional premium will be available via www.dreweatts.com