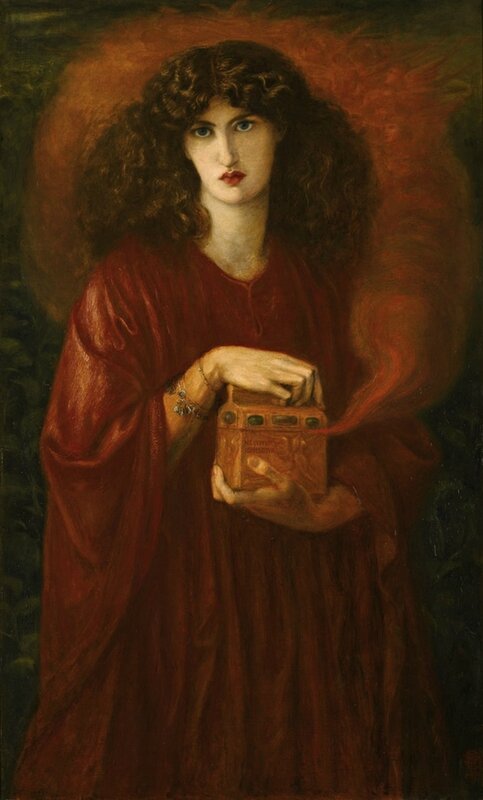 LONDON.- Pandora will once again exert her divine magnetism when Sotheby's brings to auction Dante Gabriel Rossetti’s magnificent oil painting of 1871. Estimated to bring £5-7 million, Pandora is arguably the most significant painting by Rossetti to be seen at auction in recent years. Its appearance in the company’s London sale of British & Irish Art on 22 May 2014 presents the public with a rare sighting of the work. Pandora occupies an important place in the pantheon of the artist’s images of the woman who defined his mature output, Jane Morris, and its impressive size - 131 by 79cm – lends power to Rossetti’s vision.

Simon Toll, Sotheby’s British & Irish Art Specialist, commented: “It is a great privilege for Sotheby’s to offer such an important work by Rossetti. Tate Britain’s Pre-Raphaelites exhibition, which was subsequently staged in Washington and Moscow last year, ignited a renewed interest in Rossetti, a master of storytelling and psychology. Pandora spellbindingly combines these two obsessions of the artist and comes to the market following Sotheby’s record-breaking auction prices for Rossetti in 2013.” *

The Pandora myth and Rossetti’s interpretation

Clad in a loose, long robe of Venetian red and adorned with bracelets, Pandora stands before us imperious in her beauty. She holds the fateful casket, from which escapes potent spirits in the form of red smoke, curling behind her and enveloping her hair. The story of Pandora originated in Greek mythology. Zeus commanded the creation of Pandora, the first woman on earth, who was formed out of clay by Vulcan. Her name (meaning ‘the gifted’) was derived from the gifts given to her by each of the Olympian gods: Aphrodite bestowed great beauty upon her; Hermes, the art of persuasion, and so forth. After Prometheus stole fire from Mount Olympus, Zeus took vengeance by handing Pandora to Epimetheus, Prometheus’ brother, whom she married. Given the eponymous receptacle by Jupiter and ordered not to open it under any circumstance, Pandora did not heed the warning and unwittingly unleashed a multitude of evils into the world, trapping only Hope inside as she hastened to contain the distempers within. For the early Church, the story of Pandora was a pagan counterpart to the story of Eve and the Fall of Man.

When Rossetti painted Pandora, he was consumed with passion for Jane Morris, wife of William Morris, his friend and associate. Between 1871 and 1874 Rossetti and Jane spent considerable amounts of time together at Kelmscott Manor, the house on the upper Thames in Oxfordshire which the artist and the Morrises rented together as a retreat. William Morris indulged his wife’s affair with Rossetti, which was probably unconsummated. By this time, Rossetti had been a widower for the best part of a decade, his wife Lizzie Siddal having died in 1862 from an overdose of laudanum.

For Rossetti, the image of Pandora opening the casket may have had some personal significance as in October 1869 – around the time that he designed the painting’s composition – he was persuaded to open his wife’s grave to remove a manuscript of poems from her coffin, which unleashed torments for himself. In the original myth, Pandora’s gift was a vase rather than a box, but Rossetti chose to depict the more recognisable cassonne or marriage chest. On the side he inscribed ‘Nascitur Ignescutir’ (born of flames).

Jane Morris (née Burden) had been discovered by Rossetti and Edward Burne-Jones in 1857. Rossetti and Jane were mutually attracted, but Rossetti was already engaged to Lizzie, and Jane went on to marry William Morris in 1859. Pandora was the first oil painting of Jane which began as an allegorical depiction of her, rather than a portrait. It is significant that he chose to paint her as Pandora, identifying himself with Prometheus (the first man to whom Pandora/Jane was attached) and William Morris as Epithemeus (Jane/Pandora’s unhappy husband). Jane probably married Morris for the financial stability and although evidently fond of him, she probably never really loved him. Her remarkable beauty was the catalyst for a new type of woman in Rossetti’s art – soulful, enigmatic and other-worldly – and her status as artist’s muse was sealed following Lizzie’s death.

When Pandora was begun in 1868, Jane’s influence as a muse was largely energising, inspiring and positive. Rossetti’s painting can be interpreted as a depiction of a guardian goddess who holds Hope between her hands. The symbolism of Pandora’s mythology also invites a reading of the work as proof of Rossetti’s belief that Jane had released the artist’s incarcerated passions and that she was the guardian of his hope.

The origins of the pose of Pandora can be traced to a series of photographs of Jane Morris taken in the summer of 1865, around the time that Jane’s face became an important, reoccurring image in Rossetti’s art and the rekindling of the artist’s infatuation with Jane. A photographer’s studio was erected in the garden of Rossetti’s Chelsea Home, Tudor House, and one of the photographs shows Jane full-length, standing with her back to the canvas tent and her hands clasped at her waist. It was this photograph that suggested the pose of Pandora, although it was four years before he made drawings of the subject. In December 1868 Rossetti is recorded as working on ‘some crayon heads of Mrs. Morris as Pandora’. Two-highly finished studies probably begun at the same time and dated 1869 include the chalk drawing sold at auction in 2000 for £2.6 million, establishing a record price for the artist at auction, a sum which was broken by Sotheby’s twice-over in 2013.*

Rossetti’s art defies categorisation into a particular art movement. Pandora should be regarded apart from the confines of the Pre-Raphaelite movement; rather the painting finds its true milieu in the wider context of European Symbolism. However, Rossetti’s choice of subjects drawn from classical mythology reflects his awareness of trends that became popular in the 1860s in Britain with artists of the classical revival. He occupies an important place in the history of this revival, alongside his contemporaries Frederic Leighton, Albert Moore and Edward Poynter, bringing a unique vision to the retelling of archaic tales by painting them in a way that had not been seen before.

Pandora was commissioned by John Graham for the considerable sum of 750 guineas. Graham, who made his wealth in western Scotland as a founding partner in a family business, owned important works by the Pre-Raphaelites. The painting hung at his home in Ayrshire, the imposing Skelmorlie Castle. When he died in 1877, Pandora was purchased by another keen collector of Rossetti’s work, Charles Butler, and remained in his family by descent until the mid-20th century. After its purchase at auction in 1966 for £1,250, the painting was sold to a gallery in Newcastle which specialised in work by the then neglected Pre-Raphaelites and pictures by L.S. Lowry. Rossetti was held in high esteem by Lowry, who owned and hung one of the chalk versions of Pandora in his bedroom. Pandora has remained in a private collection since its purchase from the gallery almost fifty years ago.