LONDON.- Renaissance Impressions: Chiaroscuro woodcuts from the Collections of Georg Baselitz and the Albertina, Vienna examines the artistic development of the revolutionary, yet short lived, printing technique of the chiaroscuro woodcut in the sixteenth century. Often based on designs by celebrated Renaissance masters such as Parmigianino, Raphael and Titian depicting well-known biblical scenes and legends, chiaroscuro woodcuts were the first colour prints that made dramatic use of light and shadow – chiaroscuro – to suggest form, volume and depth. The exhibition presents over 100 rare prints by artists from Germany, Italy and The Netherlands held at the Albertina Museum in Vienna and in the personal collection of the Honorary Royal Academician, Georg Baselitz.

In the early 1500s, several printmakers competed to claim authorship of the chiaroscuro woodcut. In Germany, the artist Lucas Cranach even back-dated two of his works to prove that he had invented the new technique. It is however widely thought that the first known example came from his compatriot Hans Burgkmair the Elder, with his depiction of Emperor Maximilian on Horseback, 1508, commissioned on the year of his coronation. This novel, complex printing method involved supplementing the black line block (the key block) with one or several tone blocks to create gradations of colour from light to dark for aesthetic effect. The result produced greater depth, plasticity of form, atmosphere and pictorial quality than the earlier, plainer woodcuts. The making of chiaroscuro woodcuts involved collaboration between the artist, responsible for drawing the design, and the craftsman, whose role was to carve it in relief on the woodblock. St George and the Dragon, c. 1508–10, for instance, is signed by both Burgkmair and the Antwerp woodcutter, Jost de Negker.

The chiaroscuro woodcut was adopted by other German artists, including Hans Baldung Grien and Hans Wechtlin from the circle of Albrecht Dürer, and subsequently further developed in Italy and the Netherlands. A few years after its invention in Germany, the celebrated Italian artist Ugo da Carpi, who also claimed to have pioneered the medium, made his mark with such works as The Miraculous Draught of Fishes, c. 1523–27, and Archimedes (?), c. 1518-1520 after Raphael. Unlike his Northern European counterparts, Ugo da Carpi cut his own woodblocks and increasingly avoided the use of the black key block, working exclusively with tone blocks. His innovative use of the chiaroscuro woodcut, such as unevenly cut colour fields led to works that have a more painterly character, as if they had been modelled in colour and light. His successors, Antonio da Trento and Niccolò Vicentino advanced the technique and influenced other artists such as Domenico Beccafumi in Siena and Andrea Andreani, whose Rape of a Sabine Woman, 1584, inspired by Giambologna’s famous sculpture in Florence and printed in several versions, will be on display.

The technical potential of the chiaroscuro woodcut was also explored in the Netherlands, particularly in the highly sophisticated work of Hendrik Goltzius, the medium’s most important proponent there. Highlights by the artist in the exhibition include the powerful Hercules Killing Cacus, 1588 and Goltzius’ remarkable series of landscapes and deities, comprising Landscape with Trees and a Shepherd Couple, c. 1593–98 and Bacchus, c. 1589–90.

Chiaroscuro woodcuts were collected across Europe; from inexpensive versions sold by monks to travelling pilgrims to costly impressions commissioned by aristocratic patrons and connoisseurs. Whether conceived as independent compositions or reproductions of works in other media, the woodcuts were enjoyed in their own right and admired for their sheer technical brilliance and visual power. They were also an effective means of disseminating popular subjects, kingly images and the celebrated creations of the great Renaissance artists. 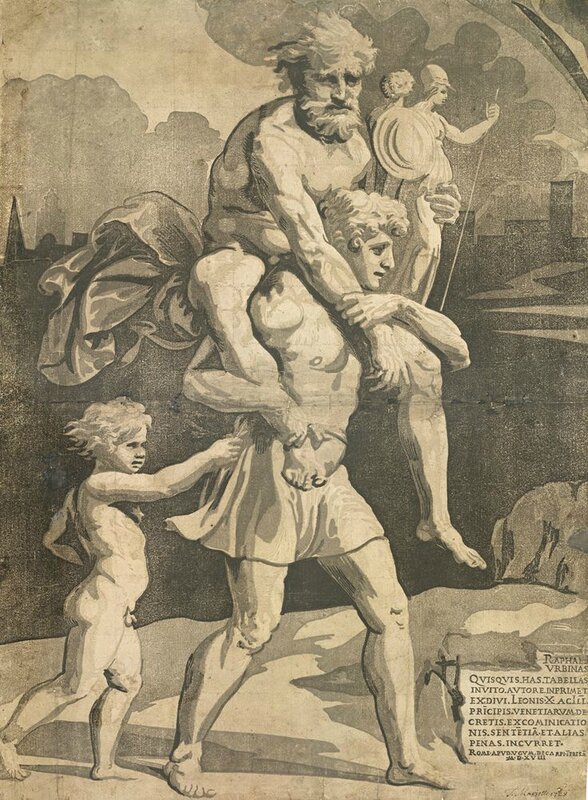