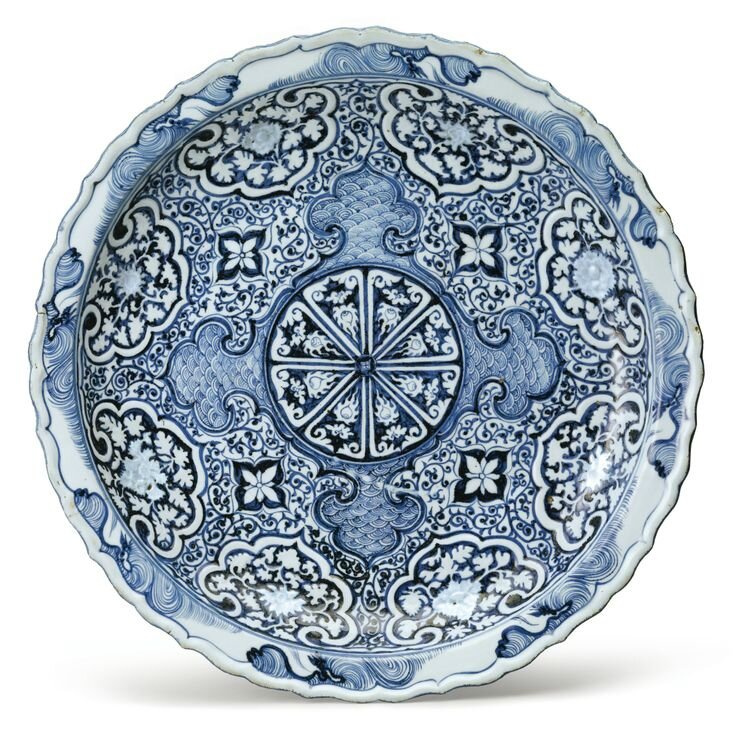 NEW YORK, NY.- This week at Sotheby’s, the auctions of Chinese Art brought a combined total of $43,687,377 million – comfortably exceeding the high estimate for the three sales of $31.3 million. The top lot of the week at Sotheby’s was A Rare Molded Blue And White Barbed Rim Dish, Yuan Dynasty, 14th Century, which sold for $4,197,000, dwarfing the $200/300,000 estimate after it was sought by eight bidders in the Fine Chinese Ceramics and Works of Art auction which took place on 18th and 19th March. The Fine Classical Chinese Paintings and Calligraphy sale on 20th March was led by the Wang Shouren album, Parting At The Ye River which sold for $2,045,000, many multiples of the $60/80,000 estimate.

Dr. Tao Wang, Head of Chinese Ceramics and Works of Art at Sotheby’s New York said: “This was an extraordinary week in New York. Time and time again, we saw multiple bidders – sometimes as many as ten on a single lot - drive prices for the very best Chinese Works of Art far over the estimates. Collectors both in China and elsewhere continue to seek pieces that have been hidden in private collections, such as the Barbed Rim Dish which has never appeared on the market and went on to sell for $4.2 million. The other story this week was the ever-growing appeal of Archaic Bronzes such as those in our special auction, and the distinguished Tian Mian Fu Yi Jiao which fetched $2.4 million.”

Rongde Zhang, Head of Sotheby’s Chinese Classical Paintings Department in New York, said: “Throughout our sale we saw collectors go to great lengths to pursue the rarest pieces, often sending prices far in excess of the high estimate. There was tremendous pre-sale interest in the album of poetry by Wang Shouren but the $2 million price was still a wonderful surprise.”

Sotheby’s Asia Week started with the special sale of Archaic Bronzes and the Wu Dacheng Jijin. All but one lot sold, bringing a total of $3,491,250, comfortably exceeding the high estimate. The auction was led by The Ji Zu Yi Zun: A Superb And Important Bronze Ritual Wine Vessel, Late Shang Dynasty, 13th-11th Century BC, which sold for $1,265,000, against an estimate of $300/400,000, while The Wu Dacheng Jijintu Scroll, Qing Dynasty, Late 19th Century, fetched $605,000, several times the pre-sale expectations of $100/150,000. 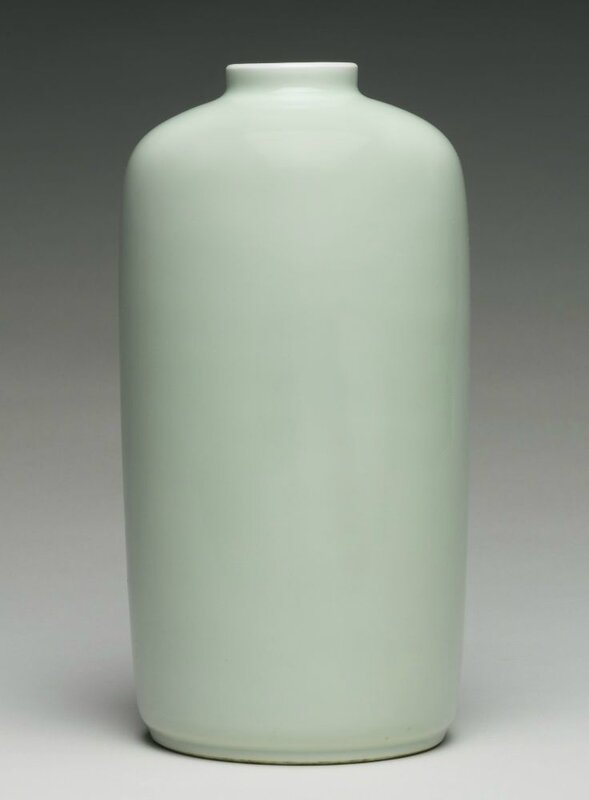 each of a similar D-form, with a scrolling apron well-carved with flowering vines which continue around the back, resting on four rectangular section barbed legs similarly carved in relief, joined by a conforming low stretcher base (2).

Note: This half-moon-form of table was often made in pairs. The tables could be used either separately or pushed together to form a round. The present pair is unusual in that the back is also carved which conveys both the additional expense of commissioning this added luxurious element for an already lavish use of highly sought after zitan wood and the added flexibility of being able to place them away from the wall where the carving could be admired. Two similar tables are illustrated in Hu Deshang, A Treasury of Ming & Qing Dynasty Palace Furniture, vol. 1, Beijing, 2007, pp. 174-175, figs. 178 and 179. For a general discussion on 'D'-shaped tables, see Wang Shixiang, Connoisseurship of Chinese Furniture: Ming and Early Qing Dynasties, vol. I, Hong Kong, 1990, p. 73. 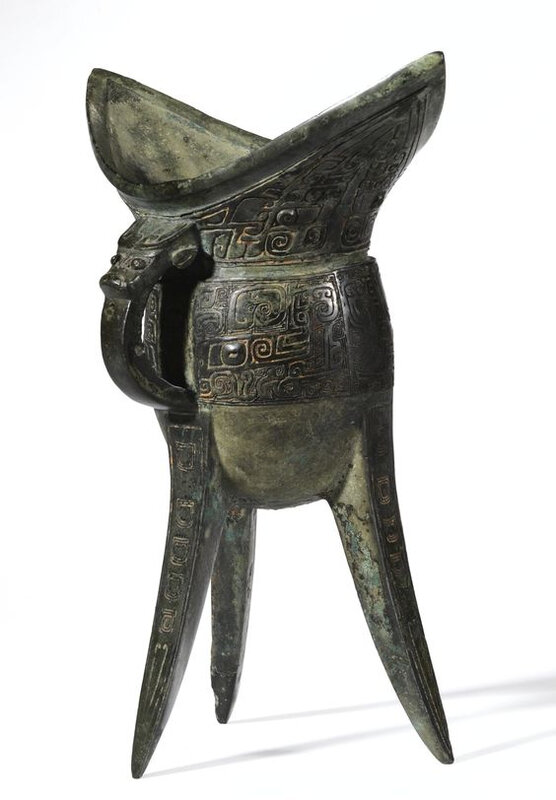 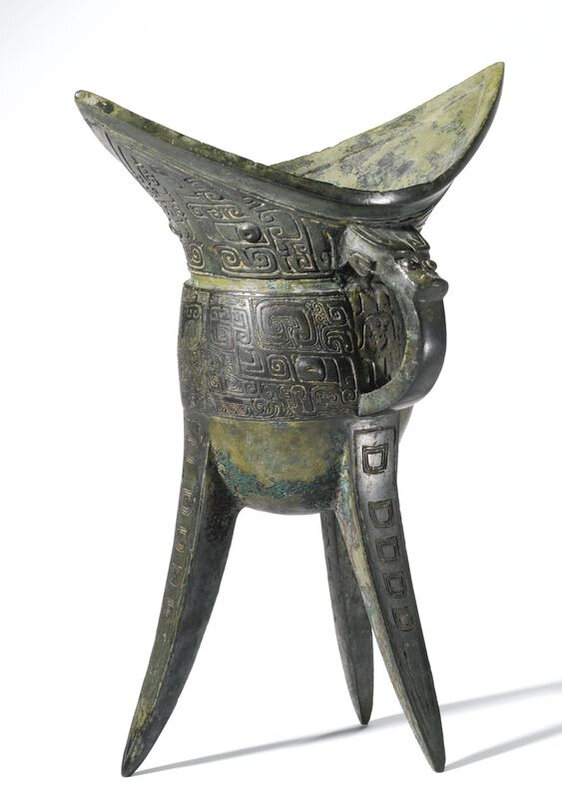 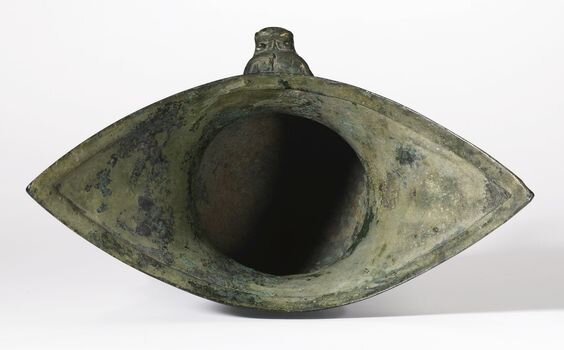 the deep ovoid body resting on three splayed blade-like legs, finely cast in relief on each side with a taotiemask with protruding eyes, curly fangs, C-shaped horns and clawed forelegs, all on an intricate leiwenground, divided on one side by a notched flange, and on the other by a vertical panel cast with an inscription beneath the loop handle issuing from a bovine head, the slightly waisted neck rising to two high flaring points on opposite sides, each cast on the underside with a pair of dragons with prominent circular eyes forming an inverted taotie mask, the three legs decorated with graduated concentric D-motifs within a single outline, a three-character inscription cast under the handle, reading yuan fu yi, the surface with a smooth grayish-green patina.

Note: The Qianlong Emperor was well known for his interest and passion for antiquity. In 1749, in the fourteenth year of his reign, the emperor ordered scholars from the royal academy, led by his ministers Liang Shizheng, Jiang Pu and Wang Youdun to compile a catalogue of the archaic bronzes in the imperial collection, titled Xi Qing Gu Jian (Reflection on Antiquity in the Western Tranquility). This project continued until 1793, culminating in four immensely rich multi-volume catalogues.

Xi Qing Xu Jian Jibian (Sequel A of the Xi Qing Gu jian) contains the first record of this remarkable bronze jiao, and in the original illustration, it appears with a cover. The imperial collection was later dispersed. In his Conggutang Kuanzhi xue(Studies of Archaic Bronze Inscriptions in the Conggutang Studio), the famous 19th century seal carver Xu Tongbo (1775-1860 or 1854) noted that he was shown the bronze jiao by a local gentleman, Qian Youshan from Xiushui (Jiaxing). The bronze jiao later passed through a number of celebrated collections (Liu Tizhi, Yu Xingwu and Liang Shangchun) and was included in many publications.

The inscription reads 'Tian Mian Fu Yi' (Ancestor Fu Yi of the Tian Mian clan). The name 'Tian Mian (or Yuan)' is a pictograph, showing a standing man and a turtle underneath; it was previously deciphered as zisun (offspring), but is clearly a lineage name. There are nearly forty existing bronzes bearing this name, dating from the Shang to the Zhou periods.  In recent years, archaeologists in Anyang have found bronzes with the same name, which suggests that the clan was closely associated with the Shang royal house.