PASADENA, CA.- The Norton Simon Museum presents its first large-scale exhibition of Himalayan Buddhist art. In the Land of Snow: Buddhist Art of the Himalayas brings together exceptional Buddhist sculpture and thangka paintings from India, Nepal and Tibet. Comprising nearly 40 works of art, mostly from the Museum’s collection but with several key loans, and spanning 1,300 years, the exhibition demonstrates the rich artistic history of the region. A highlight is the display of a monumental thangka, measuring over 20 feet in height, depicting the Buddha of the Future, Maitreya, flanked by the Eighth Dalai Lama, Jamphel Gyatso, and his tutor, Yongtsin Yeshe Gyaltsen. Constructed of appliqued silk and presented on an elaborate mounting, the thangka was commissioned by the Eighth Dalai Lama for the benefit of his tutor and for the posterity of the Buddhist faith. This is only the second time that this extraordinary painting has been on view at the Museum.

Through the examination of iconic sculptures of the Buddha and of Buddhist deities, In the Land of Snow explores many facets of Himalayan art, such as the transmission of Vajrayana Buddhism from its place of origin in India to its eventual sites of practice in Nepal and Tibet. Although it is not known when Vajrayana Buddhism first developed, by the seventh century it had become firmly established in India and was taught in the major Buddhist centers and universities. Monks from Nepal and Tibet, drawn to the “diamond vehicle” with its promise of enlightenment within a single lifetime, traveled to Buddhist universities in eastern India, such as Nalanda. These scholar monks returned home in order to share their new knowledge, which is reflected in the development of Buddhist arts outside of India.

Unlike other Buddhist traditions, Vajrayana places great emphasis on the pupil–guru relationship. Highly secretive esoteric rituals and complex meditative yogic exercises cannot be learned from texts alone; they require the aid of a skilled and knowledgeable teacher. In the Land of Snow includes paintings and sculptures of important teachers who were immortalized in art and worshipped alongside Buddhist deities and the various Buddhas within the Vajrayana pantheon. A 15th- –16th-century gilt bronze sculpture from Tibet depicts the great adept Padmasambhava, the Indian-born monk who was invited by King Trisong Detsen of Tibet in the late eighth century to introduce Buddhism to the country. There, Padmasambhava became a leading guru of Vajrayana Buddhism and helped to found the Nyingma Order, considered the oldest of the four major Tibetan Buddhist schools. Padmasambhava, also referred to as Guru Rinpoche, is typically depicted in art holding a vajra (thunderbolt), symbolizing clarity of pure thought, and a skull cap, symbolizing detachment, as seen in the Museum’s piece.

By the 13th century, Buddhism had ceased to be a major religion in India; new centers of Vajrayana Buddhism had been established in Nepal and Tibet. The Mandala of Chakrasamvara, of which the Museum has a fine 17th-century Nepalese example, was once understood to be embedded in the landscape of India; however, after the fall of Buddhism there, the Nepalese and Tibetans transferred Chakrasamvara pilgrimage sites to their own terrains. The Mandala of Chakrasamvara and others like it were painted as thangkas or “flat field” paintings to aid practitioners in their meditative practice. By meditating on the mandala, understood as a cosmic diagram of the universe, adepts are able to visualize themselves in a “pure land” and attain Buddhahood. In addition to this two-dimensional mandala, the exhibition includes a very rare three-dimensional bronze mandala called Lotus Mandala with Eight Mothers. Created in Nepal in the 18th century for practitioners of Hinduism, this striking work shows eight lotus petals (representing the four cardinal directions and the four intermediate directions) decorated with eight female deities (the central deity that would have emerged from the center of the lotus no longer remains). In addition to these mandalas, ritual implements that aid practitioners in their quest for enlightenment are also on view.

In the Land of Snow is organized by Assistant Curator Melody Rod-ari. 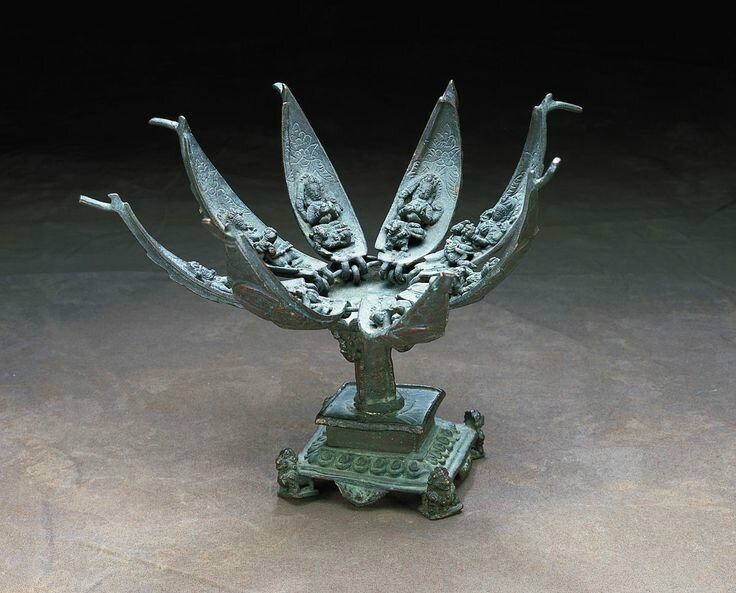 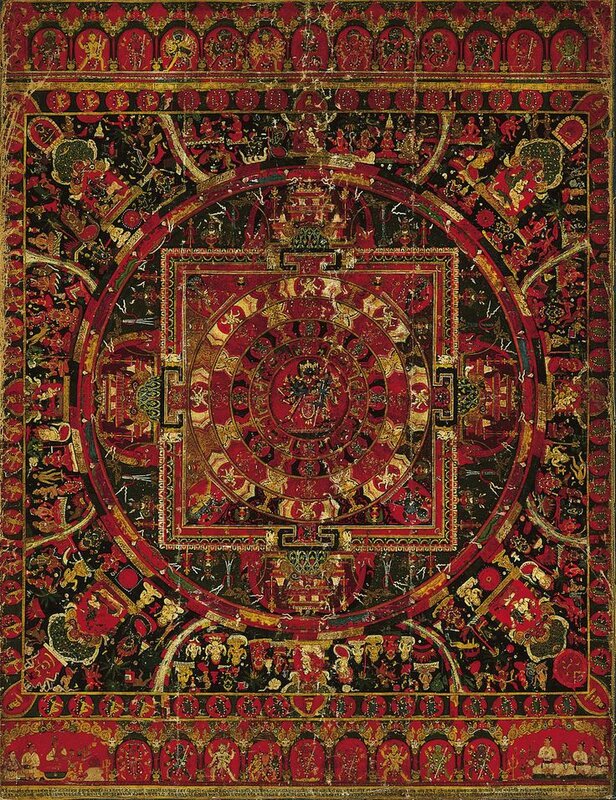