The screen was by far the top lot of the sale and the final hammer price caught the Elite team, which had assigned it a modest pre-sale estimate of just $1,400-$1,800, a little by surprise. “But it only proves what we’ve been seeing recently,” said Scott Cieckiewicz of Elite Decorative Arts. “Chinese porcelain plaques and screens have become extremely popular and bring high dollars.”

Case in point: a set of four Chinese famille rose porcelain plaques depicting the four seasons and housed in hardwood frames, with inscriptions, was offered recently by the British auction firm Charterhouse, with a pre-sale estimate of $300-$500. By the time the final gavel fell, the set had reached a stratospheric $630,000. Undeniably, the market for certain Chinese antiques is red hot.

“Obviously we are seeking these items for consignment,” Cieckiewicz said, “not just porcelain plaques and screens, but other antiquities, too, like red coral carvings, jade carvings, porcelain, bronze and more.” At the firm’s March 15 auction, he noted, a palatial-sized Chinese porcelain antique famille rose fish bowl (or planter), expected to realize $3,000-$5,000, reached $27,830.

The antique Chinese porcelain screen that topped the March 29 sale was a gorgeous example, and substantial, too, with an overall size of 38 ½ inches by 46 ¾ inches. All four of the panels were famille rose. The sale, which grossed just over $250,000, attracted 80 in-house bidders, 21 phone bidders and 1,727 online bidders, who bid via Liveauctioneers.com and Invaluable.com.

Following are additional highlights from the auction. All prices quoted include either an 18 percent buyer’s premium for in-house and phone bidders or a 21 percent premium for internet bidders.

A blue and white Chinese footed wash cup from the Ching-Lung dynasty (circa 1736-1796), measuring five inches in height and signed to the base, changed hands for $10,030. This lot was intriguing because it became lost some years ago and again resurfaced just after World War II.

A large oil on canvas painting by the Lithuanian-born American artist Max Band (1900-1974), titled Butcher Boy and imposing in size at 24 ½ inches by 39 inches, garnered $8,260. The work is artist signed lower left and framed. Band studied at the Berlin Academy, authored the book History of Contemporary Art (1935) and lived a good portion of his life in Hollywood, Calif.

A bronze sculpture depicting a beautiful, partially nude woman by the French artist Jean-Baptiste Clesigner (1814-1883), 29 inches tall, fetched $5,082. The 1857 work was highly detailed, with the woman’s hair bound to the back with grape leaves. Clesinger was also known as Auguste. He learned from his father, a sculptor and stone mason, and maintained studios in Paris and Rome.

Another bronze – a limited-edition and large (92 inches tall) sculpture by the Israeli-Egyptian artist Itzik Asher (b. 1946), titled Virgin Bathing, signed and dated (1995), breezed to $7,965. Also, a 19th century 18kt yellow gold micro-mosaic bangle bracelet with one side featuring a mural based on a fresco painted by Guido Reni (circa 1612) in Rome, Italy, reached $5,900.

Chinese carved red coral sculptures are hugely popular with collectors, and this auction had several to bid on. Examples included a grouping depicting a Quan Yin standing atop a floral decorated dragon boat ($5,082); a Shou Lou surrounded by seashells ($4,477); a peddler boy holding a bird, staff and jug ($3,025); and a Quan Yin holding a basket of flowers ($4,602). 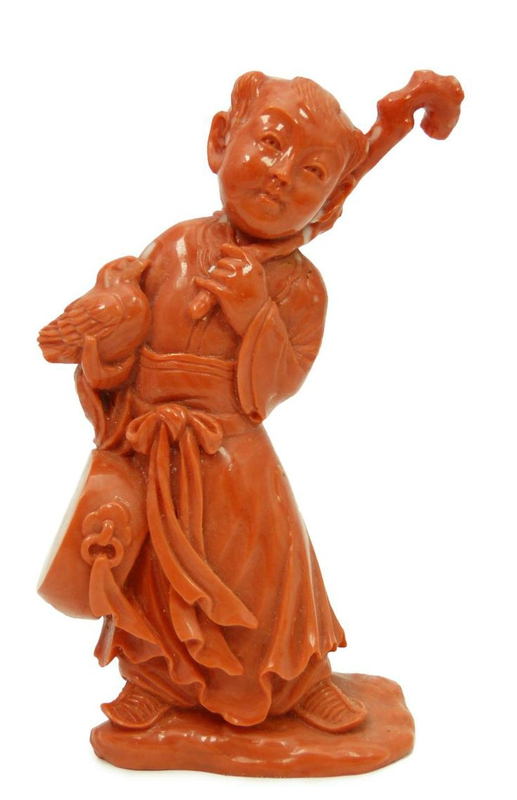 Extraoridinary carved Chinese red coral Quan Yin is beautifully carved holding a basket of flowers. Tremendous detail in the carving of her robe and her hair. She is carrying a large pick on her back and sits on a footed wooden base. Measures from base 6-1/2" tall (16.51cm) total weight 331g. Sold for $4,602. Photo courtesy Elite Decorative Arts

Elite Decorative Arts’ next big auction is scheduled for Saturday, April 12, also in the Boynton Beach gallery, starting promptly at 1 p.m. (EST). Offered will be hundreds of examples of fine decorative arts. Previews will be held Friday, April 11, from 11-5 and on Saturday from 11-1. As in past auctions, internet bidding will be facilitated by LiveAuctioneers.com and Invaluable.com.