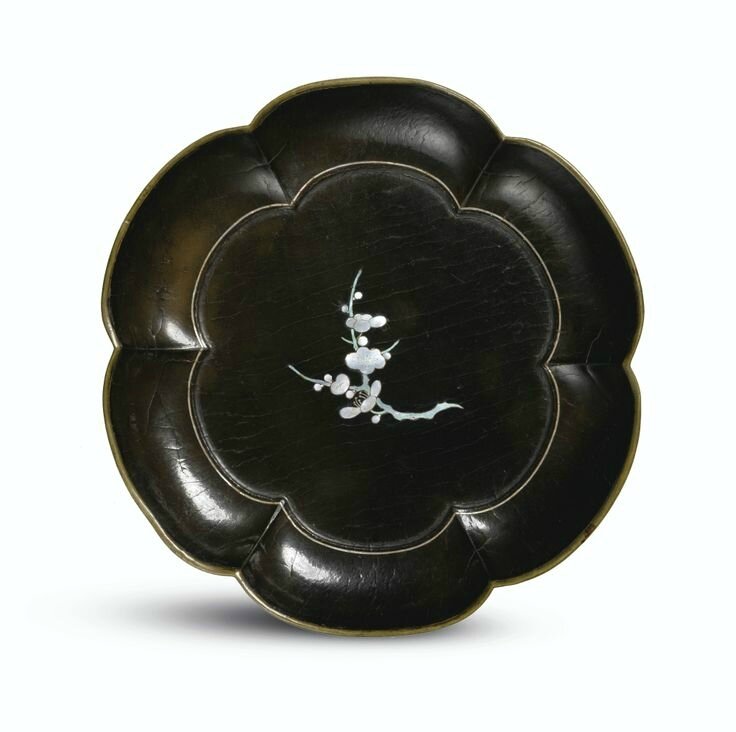 lightly constructed with shallow everted sides flaring from a recessed base to a lobed rim, divided into six lobes by small ridges evenly radiating around the cavetto, the recessed interior delicately inlaid in mother-of-pearl with a single prunus spray in the centre (possibly later) and a thin lobed frame outlining the cavetto, the iridescent shell slivers detailed with fine incisions, the lustrous lacquer of deep chocolate-brown colour picked out with fine horizontal crackles, the rim encircled with metal.

Note: Zhu Xi (1130-1200), the famous Song Dynasty Confucian philosopher and scholar, gave the prunus flower four virtues: the great potential in the bud, prosperity in the flower, harmony in the fruit, and rightness in its maturity. These were characteristics of heaven (tian) as recorded in the Book of Changes (Yijing). The present exquisitely fashioned lacquer dish, for its form and decoration, would have reminded any Chinese, whether from the ruling class or belonging to the scholar gentry, how, when snow melts and swallows return to the bare winter landscape, the prunus tree blossoms bringing signs of the arrival of Spring and a new beginning. Through its elegant floral shape, the vessel celebrates the joys and vitality of life; through its material and craftsmanship, it expresses life’s hardship and endurance; and through its silk-like smooth touch, it prompts one’s hope in the regeneration of life. We find that especially from the Song dynasty lacquer objects, such as this dish, were made not only to showcase the lacquer artists’ high level of expertise in the field, but also to demonstrate the role played by nature in everyone’s lives. Unity of nature and culture were key to the development of Chinese tradition, with elements from nature taken as essential values representing characteristics such as purity, harmony, righteousness and humility.  All these important ideals are conveyed in this one lacquer piece.

This dish is amongst the most important lacquer examples extant from the Song dynasty. It is pleasing to the eye and delicate to the touch, and as mentioned earlier, a true showcase for the high level of technical skill exercised by the lacquer artist who was able to form a lobed shape while fashioning the interior central frame in a similar six-lobed form. Two closely related plain lacquer dishes are known, both in the collection of the Detroit Institute of Arts, illustrated in Hai-wai yi-chen, Chinese Art in Overseas Collections. Lacquerware, Taipei, 1987, pl. 34 and pl. 50, the former made in black lacquer and attributed to the Song dynasty, while the latter in red lacquer and attributed to slightly later, the Yuan period. See also a set of five brown lacquer dishes of somewhat larger dimensions, sold at Christie’s Hong Kong, 31st May 2010, lot 2024; another much larger plain six-lobed dish, sold in our London rooms, 15th July 1980, lot 212; and a further example, sold at Christie’s Hong Kong, 27th May 2009, lot 1898.

Lacquer lobed dishes belonging to this special group of wares are better known with a circular centre, such as the piece, in the collection of the Idemitsu Museum of Art, Tokyo, included ibid., pl. 33; another slightly smaller black example, with a thick metal rim and a round centre, included in the exhibition So Gen no bi/ The Colors and Forms of Song and Yuan China, Nezu Institute of Fine Arts, Tokyo, 2004, cat. no. 17, together with a red-lacquer dish of the same shape but closer in its dimensions to this piece, cat. no. 18. A dish of this type, from the Lee Family collection, was sold at Christie’s Hong Kong, 3rdDecember 2008, lot 2109, also with a round centre and covered in red lacquer. See a further dish of this type with a circular centre, from the Dubosc collection included in the Eskenazi exhibition Chinese Lacquer from the Jean-Pierre Dubosc Collection and Others, London, 1992, cat. no. 2, together with a small black lacquer covered box, the cover decorated in mother-of-pearl inlay with the design of a single flowering prunus branch, cat. no. 9, also from the Dubosc collection.

The decoration found on the present dish, as Peter Lam notes in Layered Beauty, Hong Kong, 2010, p.72, is likely to be an addition of a later date, probably of the Yuan or Ming periods. On the use of inlay decoration Lam, ibid., p. 72, mentions that from the Song dynasty onwards thin pieces of mother-of-pearl were used in line with the thin and light body. He further describes the process of using mother-of-pearl for inlay as one that is highly labour intensive, starting with the boiling of the iridescent substance obtained from the inner layer of the shell of clams, conchs etc. for days or weeks, then peeling it off the shell, cutting it into small pieces and fixing them to the body of the lacquer ware before black lacquer is applied. The mother-of-pearl decoration is revealed through the careful polishing of the surface. For Song dynasty examples of mother-of-pearl inlaid lacquer wares, see a tray in the Asian Art Museum of San Francisco, included in Hai-wai yi-chen, Chinese Art in Overseas Collections. Lacquerware, op.cit., pl. 38, the design consisting of a single chrysanthemum branch with blooms and leaves; and a black lacquer screen for the scholar’s studio, depicting a flowering prunus branch, also in the Asian Art Museum of San Francisco, included ibid., pl. 49.

Six-lobed dishes are well known from Song ceramics; for example see a qingbai dish included in So Gen no bi/ The Colors and Forms of Song and Yuan China, op.cit., cat. no. 22, together with two ‘Ding’ dishes of this form, cat. nos. 23-24.