A parcel-gilt bronze figure of a seated luohan, Ming Dynasty, Hongzhi Period, dated in accordance with 1496

A parcel-gilt bronze figure of a seated luohan, Ming Dynasty, Hongzhi Period, dated in accordance with 1496 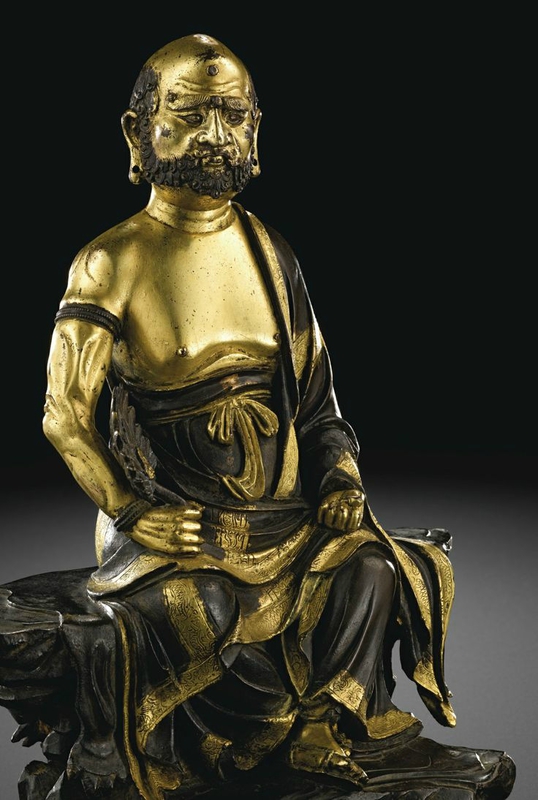 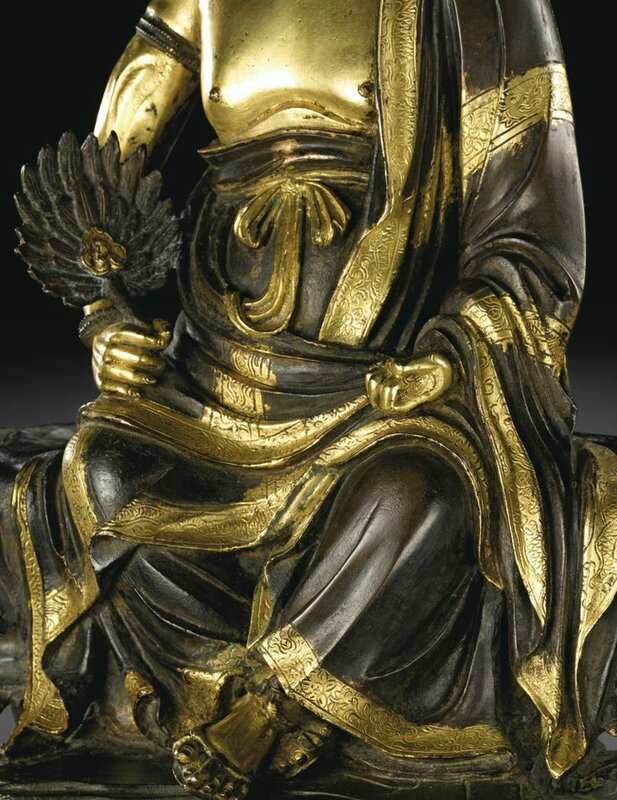 sturdily cast with his legs crossed, the contemplative face with a furrowed brow below a raised urna, gently pursing his lips framed by a thick curly moustache and beard, flanked by long pendulous pierced earlobes, and wearing a loosely-fitting voluminous sanghati covering his left shoulder, adorned with a patchwork of grids defined by gilt-decorated hems with dragons and florets, over the undergarment gathered around his bare chest, his body unadorned, save for the armband on his sinewy right arm, and the feather fan held in the right hand resting, his left hand slightly clenched, his feet shod in a pair of sandals, seated on a craggy rock covered by animal skin, the tail hanging over the ledge cast with two characters you qi ('the seventh on the right'), partially obscuring a horizontal inscription of nine raised characters on the rock, probably reading Hongzhi bingchen taijian Yao Ju shi ('bestowed by eunuch Yao Ju in the bingchen year of the Hongzhi period', corresponding to 1496); 31.6 cm., 12 1/2 in. Estimate 4,000,000 — 6,000,000 HKD

Note: The two characters you qi ('the seventh on the right') on the back of the present figure indicates that it came from a set enshrined in a temple or private shrine. The presence of the inscription with the name of the eunuch Yao Ju, and the fine craftsmanship provide evidence of the importance of this piece and of its commissioner. It is possible that the eunuch may have commissioned the original set for a temple in his hometown. As most eunuchs would not have had children, such an act would ensure that he would be remembered after his death, would gain him merit for a better rebirth, and would have brought him prestige while he was alive. Eunuchs also commissioned religious images to gain favour with members of the royal family who professed to follow a particular religion. A cast iron figure of a luohan bearing an inscription attributing it to the same eunuch, Yao Ju, but dated to the dingsi year of the Hongzhi reign, corresponding to 1497, is in the collection of the Palace Museum in Beijing.

The present figure with its expressive bearded face, prominent forehead and urna, and strong nose, so unlike Chinese physiognomy, points to Buddhism's foreign origins. The figure holds a fan in his right hand, with his left hand resting on his lap.This attribute and posture identify the luohan as Jivaka, also known as Gobaka. This iconography is based on paintings of luohan by Guanxiu (832-912). These images of the luohan were later engraved in stone in 1764 on the sides of the Miaoxiang pagoda in the Shengyin Temple, and are best known today from rubbings taken from those stone engravings. A rubbing of the luohan Jivaka is in the Chinese Rubbings Collection of the Harvard Fine Arts Library, Visual Information Access ID olvwork348709, item ID 10096888. An image of the same luohan based on those rubbings is illustrated in Harriet E. Huntington, 'The Sixteen Buddhist Arhats,' Arts of Asia, March-April 1977, p. 69.

A luohan is a perfected being, a disciple of Buddha who has attained enlightenment, but chooses to remain engaged in the world, postponing nirvana, in order to aid all sentient beings. The luohan achieves enlightenment through instruction rather than through his own insight and meditation, and as a result, ranks just below the bodhisattva. In Buddhist texts the Buddha is described variously as being accompanied by luohan, either fifty, five hundred, or mutiples of this number. These numbers are usually taken to give an indication as to the size of the multitude, and are not meant to be literal. In Chinese art however, these numbers became a convenient convention for portraying these worthy disciples of the Buddha. The first portrayals of luohan appear at the beginning of the sixth century in Longmen, a Buddhist cave site near Luoyang. There, they are portrayed as a group listening to Buddha's teachings. By the Tang dynasty (618-907), they are rendered more as individuals, as illustrated in The Buddha in the Dragon Gate, Antwerp, 2001, cat. no. 48. The earliest reference to a group of sixteen arhats occurs in the eighth century. These sixteen are believed to be the earliest followers of Buddha. By the Song dynasty (960-1279), this number had expanded to eighteen. A set of sixteen Ming dynasty, highly individualized and expressive, arhats from the Shuanglin Temple in Pingyao are illustrated in Buddhist Sculpture of Shanxi Province, Beijing, 1991, figs. 193-226.