Impressive diamonds, coloured gems and natural pearls are the stars of Bonhams sale

Impressive diamonds, coloured gems and natural pearls are the stars of Bonhams sale LONDON.- A white diamond ring by Piaget is the star of Bonhams Fine Jewellery sale at New Bond Street on 30th April.

The marquise-cut diamond, weighing 8.97 carats, has been graded as D-colour - the top colour grade for white diamonds. At VVS2, it is also of excellent clarity. The diamond has been classified by the GIA - the world's premier diamond-grading laboratory - as Type IIa, meaning it is chemically pure. Diamonds of such high quality and large size are extremely rare and the present lot is offered with an estimate of £250,000-£350,000 (US$ 410,000 - 580,000). 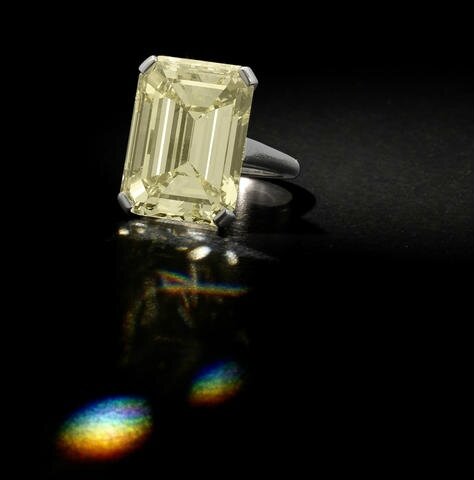 Accompanied by a report from GIA stating that the diamond is Fancy Yellow, natural colour, VS2 clarity. Report number 6167006526, dated 25 March 2014. Accompanied by a report from Gübelin stating that the emerald is of Colombian origin, with indications of insignificant clarity enhancement. Report number 14010200, dated 30 January 2014. Accompanied by a report from SSEF stating that the sapphire is of Burmese origin, with no indications of heating. Report number 72214, dated 9 January 2014.

For connoisseurs of period jewellery the sale offers a chance to own a rare "Orange Tree" brooch made by Cartier Paris in 1914. This tiny jewel – one hundred years old – exemplifies early 20th century quality and innovation. Provenance: Gifted to Elizabeth Corbett on her wedding day in 1941 by Lady Jean Ward, granddaughter of Darius Ogden Mills, US financier and philanthropist and once the richest man in California.
Direct descent to the present owner.

This is a rare example of Cartier's "Orange Tree" design and was created by Cartier Paris in 1914. Although it is difficult to attribute surviving Cartier jewels to individual designers due to the firm's policy of anonymity, this small brooch, standing just 3.3cm high, incorporates a myriad of innovative design influences and technical innovations, all characteristic of Cartier's pioneering designer Charles Jacqueau (1885-1968). After joining the firm in 1909, Jacqueau guided Cartier away from the Garland Style, advocating bold colours in inventive, contemporary designs that would set it apart from its competitors artistically. Jacqueau borrowed liberally from other cultures in his design repertoire; motifs from Egyptian, Assyrian, Persian, Indian, Islamic, Japanese, Greek and Chinese civilizations were all thrown into the melting pot. His sketches from nature in the Jardins des Plantes were translated into miniature gemstone plants, earning him the nickname "Jacqueau la Fleur". Jacqueau regularly visited the Louvre and drew inspiration from the exhibits there; perhaps the painting "Madonna della Vittoria" (1495), depicting Saint Elizabeth and the little Saint John under lemon and orange trees on which birds perch, helped to inspire the "Orange Tree" line.

One of Cartier Paris' earliest "Orange Tree" brooches was made in 1913; it is similar to this example in being of two-dimensional, highly stylised form incorporating birds' head motifs, but here the similarity ends. Whereas the 1913 brooch is monochromatic, almost entirely set with white diamonds offset by a few onyx highlights, this brooch, made a year later, bursts with colour combinations and different shapes and cuts of gemstone. 1913 was a pivotal year for Cartier: Jacqueau's obsession with the bright colours in Diaghilev's Ballet Russes had reached its zenith - Nadelhoffer notes how his colleagues in the design studio playfully drew caricatures of him dressed as Isadora Duncan in billowing robes - allowing the firm to finally break free from the constraints of the Garland Style. In November 1913, Cartier showcased fifty new jewelled creations at their New York premises, which they described as "from the Hindoo, Persian, Arab, Russian and Chinese". This "Orange Tree" brooch of 1914 clearly demonstrates the new influences at play in its use of gemstones of different shape, colour, cut and texture, from the carved rock crystal applied over a green foil, to the buff-top calibré-cut citrines, and the use of shaped onyx, which had been introduced into Cartier's designs from 1910, and which lent structure and contrast to so many of its Art Deco pieces. In addition, the brooch displays the maker's mark of Henri Picq, Cartier's main workshop supplier between 1900 and 1918, renowned for their high-quality platinum and who would later execute many of the "Tutti Frutti" pieces of which the brooch is surely a very early forerunner. A pair of natural pearl and diamond pendent earrings, circa 1965. Photo: Bonhams.

Accompanied by a report from SSEF stating that the pearls are natural, saltwater. Report number 72970, dated 6 March 2014.

Accompanied by a report from AnchorCert stating that the pearls are natural. Report number 20014259, dated 22 January 2014. A pair of diamond pendent earrings, circa 1930. Photo: Bonhams. A pair of emerald and diamond earrings, by Harry Winston. Photo: Bonhams.

Accompanied by a report from Gϋbelin stating that the emerald weighing 12.02 carats is of Colombian origin, with indications of minor clarity enhancement. Report number 14010313, dated 5 February 2014.

Accompanied by a report from Gϋbelin stating that the emerald weighing 11.72 carats is of Colombian origin, with indications of minor clarity enhancement. Report number 14010312, dated 5 February 2014.

Accompanied by a report from Gϋbelin stating that the emerald weighing 12.02 carats is of Colombian origin. Report number 9305039, dated 13 May 1993.

Accompanied by a report from Gϋbelin stating that the emerald weighing 11.73 carats is of Colombian origin. Report number 9305040, dated 13 May 1993.