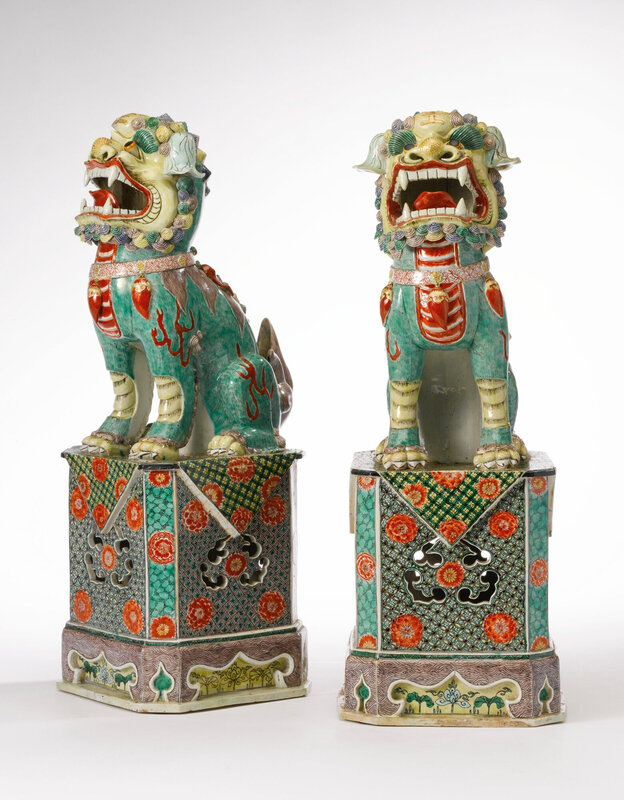 Note: Not indigenous to the region, lion imagery and its association with royalty and as protectors of the divine traveled, along with other imagery, from India via the Silk Road to China. Representationally they can be seen in pairs incised into stone at the base of Northern Wei Buddhist steles already established in the role of guardian. Patricia Bjaaland Welch in Chinese Art, A Guide to Motifs and Visual Imagery, Singapore, 2008, p. 135, remarks that real lions were presented at court as tribute “as early as 87 CE”. It is clear that the present figures are not meant to be natural representations but rather a stylized compilation and one that accentuates the animal’s power and ferocity. Each of the present pair features an unusually large head with a gaping open mouth revealing sharp teeth and distended eyes to emphasize both its might and vigilience. The tight snail curls of the mane are reminiscent of those of the Buddha and the wang character on the raised brow adds to the spiritual force of these much-loved forms. The word for lion also plays a role in its significance. Shi is a homophone for ‘teacher’ which elevates the significance of the animal.

Pairs of lions traditionally flanked entryways to official buildings, residences and temples. By the late Ming dynasty an alternative representation appears; a male lion with a sphere under its paw and the female with a pup. The present pair rest on the back haunches, the front paws unencumbered. The exceptionally large size of the present pair is noteworthy. They would have been placed prominently, perhaps on either side of a doorway to an important room, modeled with highly animated features in their enduring protective stance.