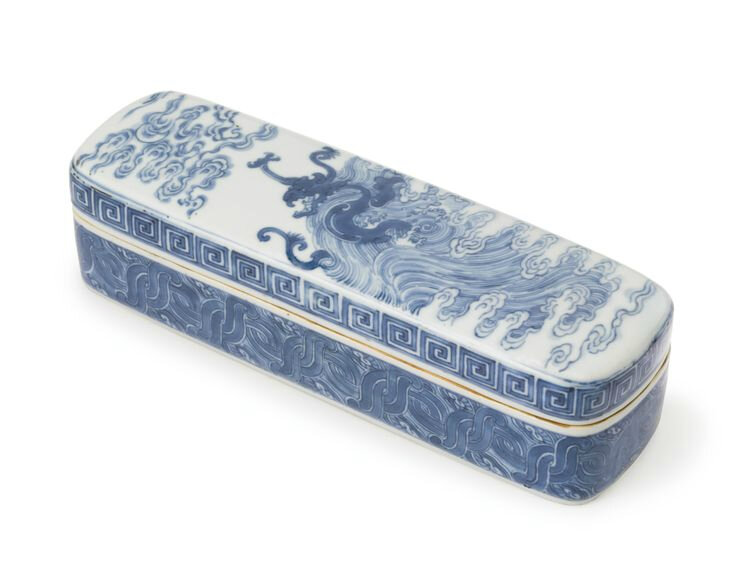 Note: This elongated form of pen box was a traditional part of the Islamic calligrapher’s equipment from the 13th century onwards. In addition to containing an ink pot, a pen box would have held several carefully made reed plumes, a pair of scissors, a knife for shaping the plumes, and an assortment of other necessary items.

Inspired by finely chased and inlaid metal work examples, the first Chinese porcelain examples of imperial quality date to the Ming Dynasty; almost all from the reign of the Zhengde emperor, a student of, and possibly even a convert to the Islamic faith. Uyghur influence at court enabled Muslims to commission porcelain of such superiority that these rare pieces were much in demand not only for export but domestically as well. A fine example, blue and white porcelain inlaid with gold and rubies from the Topkapi museum, is illustrated in The Art of Sultan Suleyman the Magnificent, Washington D.C., 1987, no. 63, p. 135.

The delicately penciled drawing on the present piece relates to a number of pieces designed by Liu Yuan. A painter and calligraphy, Liu Yuan attracted imperial attention with his illustrations for a book, Lingyange gongchen tu (Portraits of Meritorious Statesmen for the Hall of Lingyan), which is a reproduction of portraits of the twenty-four legendary Tang dynasty statesmen who helped Li Shimin establish the Tang dynasty. The gist of the book relates the rewards to those who are politically loyal; a theme the Kangxi emperor encouraged. In recognition of his work, Liu Yuan was summoned to Beijing to serve as a court artist in the 18th year of the Kangxi era (1679) and by 1682 was creating designs for Zang Yingxuan, supervisor of the imperial kilns at Jingdezhen. The Qingshi gao (Draft of the history of Qing) recorded:

"At that time, the imperial kilns were established in Jingdezheng, Jiangxi. Yuan presented hundreds of paper designs for porcelain samples. These designs draw inspirations from both ancient and modern forms and combine with innovative ideas. They are most notable for figural images, landscape, the birds and flowers, which are better than Ming dynasty wares".

For an example of a related work that is directly attributed to Liu Yuan’s designs see a Kangxi mark and period vase painted in underglaze blue and copper-red vase from the Percival David Collection, now in the British Museum and illustrated in Rosemary E. Scott, For the Imperial Court, London, 1998, no. 45. 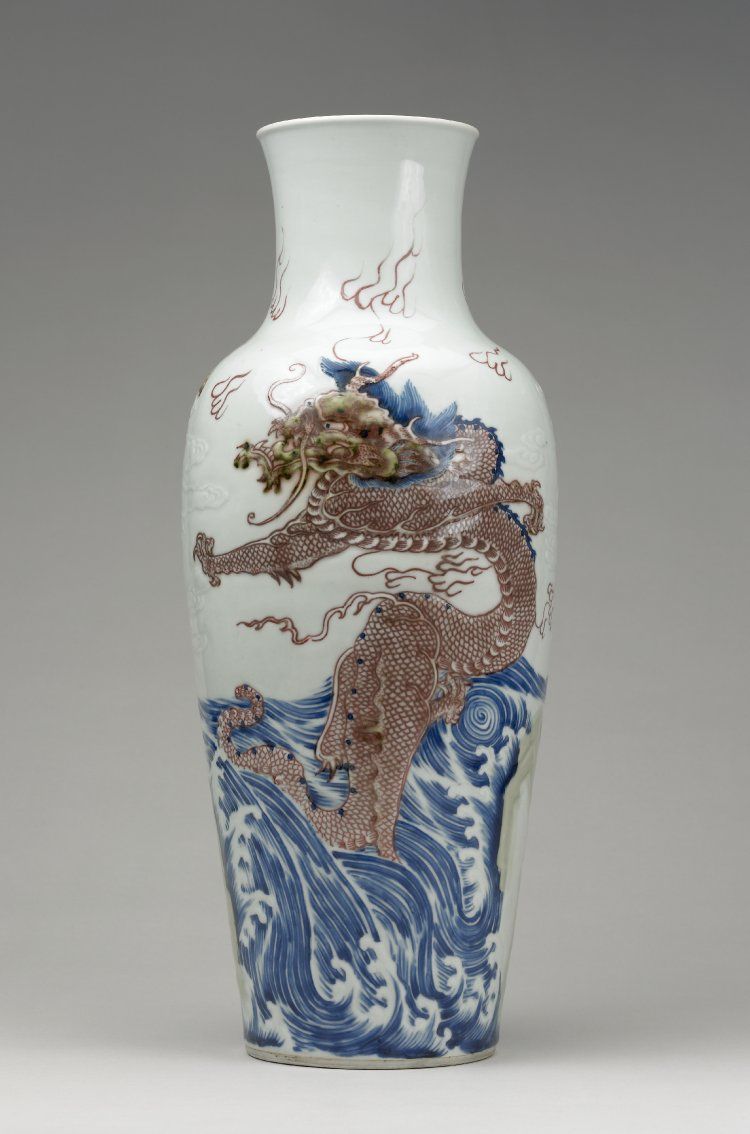 Qing dynasty examples of pen boxes are rare and were undoubtedly created as exotically-styled luxury items. The present box, although traditionally formed, is painted in a quintessentially Chinese manner with a single dragon leaping from a roiling sea.  Another similarly decorated box was sold in our Hong Kong rooms 28th November 1970, lot 167 and a lavender-glazed example with an incised dragon design, formerly of the E.T. Hall Collection was sold Christie’s London, 7th June 2004, lot 285. Incised celadon-glazed pen boxes, Qianlong mark and of the period, are illustrated; one by John Ayers, The Baur Collection, Chinese Ceramics, vol. 3, Geneva, 1969, no. A 376; and another in the Freer Gallery of Art, Washington DC in Toki Zenshu, vol. 16, Tokyo, 1957, pl. 64. Two susancai examples, one painted with a dragon and the other with a phoenix, are in the Qing Court Collection and illustrated in The Complete Collection of Treasures of the Palace Museum,  Miscellaneous Enamelled Porcelains, Plain Tricoloured Porcelains, Hong Kong, 1996, nos. 213 and 217.