Enjoy a rare opportunity to see four paintings by, or attributed to Caravaggio at the MFA, Boston

Enjoy a rare opportunity to see four paintings by, or attributed to Caravaggio at the MFA, Boston BOSTON, MASS.- The Museum of Fine Arts, Boston, presents a rare opportunity to view four intriguing paintings by, or attributed to, Michelangelo Merisi, called Caravaggio (1571-1610). The exhibition, Visiting Masterpieces: Caravaggio and Connoisseurship (April 12–June 15, 2014), introduces visitors to the art of judging whether a “Caravaggio” is, in fact, a “Caravaggio.” Four works never before seen in Boston provide an inside look at the complexities of connoisseurship and attribution. Caravaggio’s Fortune Teller (about 1594–95) and Fra Antonio Martelli, Knight Grand Cross of the Order of Malta (about 1608), once doubted by experts, are now considered benchmark works by this artist. Two more paintings—Maffeo Barberini (about 1596) and Saint Francis in Meditation (about 1595)—are at the center of ongoing debates. Organized by the Muscarelle Museum of Art, the exhibition in the MFA’s Lee Gallery allows visitors to employ the analytical thinking of experts and decide for themselves: which could be true Caravaggios? Visitors are encouraged to tweet their opinions using the hashtag #TrueCaravaggio and follow @mfaboston for conversation about the paintings. The exhibition is organized by the Muscarelle Museum of Art in collaboration with MetaMorfosi associazione Culturale and the Museum of Fine Arts, Boston, with the support of the Patrimonio del Fondo Edifici di Culto, amministrato dal Ministero dell’Interno–Dipartimento per le Libertá Civili e l’Immigrazione–Direzione Centrale per l’Amministrazione del Fondo Edifici di Culto, and under the auspices of the City of Carpineto Romano.

“This exhibition gives us the chance to examine Caravaggio’s paintings in a critical way, focusing on connoisseurship—the process, based on visual arguments, of determining a work’s authorship and quality,” said Frederick Ilchman, Chair, Art of Europe and Mrs. Russell W. Baker Curator of Paintings at the MFA. “Whatever the subject matter, these pictures possess the close scrutiny of the real world and the almost photographic crispness that remain a hallmark of Caravaggio’s art, and of the new style of painting he ushered in during his short life.”

This small exhibition originally featured the Fortune Teller and two nearly identical paintings of Saint Francis in Meditation—one from Rome’s Church of Santa Maria della Concezione and the other from the Church of San Pietro in Carpineto Romano (on view at the Muscarelle Museum of Art from February 8–April 6, 2014). With support from the Italian Ministry of Culture, the MetaMorfosi associazione Culturale and Muscarelle Chief Curator John Spike, the presentation has been expanded and now features the version from Carpineto Romano along with the two additional portraits. With the new loans in place, Caravaggio and Connoisseurship now includes more of the artist’s great range, such as scenes of daily life, heartfelt religious paintings and a lesser-known topic, portraiture.

Michelangelo Merisi was born in the northern Italian city of Milan, but his family was from the nearby town of Caravaggio, hence his nickname. By the time he died at age 38, he had revolutionized painting in Italy and beyond—working directly from life and fusing naturalism with dramatic contrasts between darkness and light (in Italian, chiaroscuro). He fled Rome after killing a man in a brawl, and lived the rest of his years in exile in Naples, Malta and Sicily, though he continued to create powerful works for churches and private patrons.

During his brief, turbulent career, Caravaggio was Rome’s most famous painter. He was also its most controversial. His revolutionary style—with spot-lit figures painted directly from life—both shocked and inspired his peers. In less than 20 years, he set a new course for painting in Europe. And then, almost as quickly, his paintings fell from taste and for centuries were largely forgotten. Today, fewer than 75 paintings can be traced conclusively back to his brush. Many more have been proposed. With few records from his life, and countless works in his style by admiring followers, Caravaggio poses special challenges to scholars as they try to piece together the story of his career and the paintings he may have made. The Fortune Teller is an undisputed work by Caravaggio’s hand, and provides a prime example of his technique. On loan from Rome’s Capitoline Museums, the painting depicts a well-dressed young fop who is about to have his ring stolen by a gypsy. In Caravaggio’s day, gypsy women were assumed to be thieves, and here he plays off that stereotype, seeming to warn of the dangers of a woman’s charms. A similar composition in the Louvre has long provoked debate over which picture, the Capitoline or Louvre canvas, was Caravaggio’s original. Research on the Capitoline painting in the second half of the 20th century confirmed a trail of ownership all the way back to Cardinal Francesco Maria del Monte, Caravaggio’s earliest collector in Rome. The painting joined the collection of the Capitoline Museums in 1749 and has remained there since. Recent examination and conservation confirms that this version was painted first.

Caravaggio made standalone portraits at every point in his career. His 17th-century biographers note that he was, especially in his youth, churning them out “three heads a day.” Today, more than a dozen portraits cited by the early sources remain untraced, although that small number doesn’t mean that more haven’t survived. As scholars work to discover these paintings, they’re faced with a difficult question: what exactly does a portrait by Caravaggio look like? 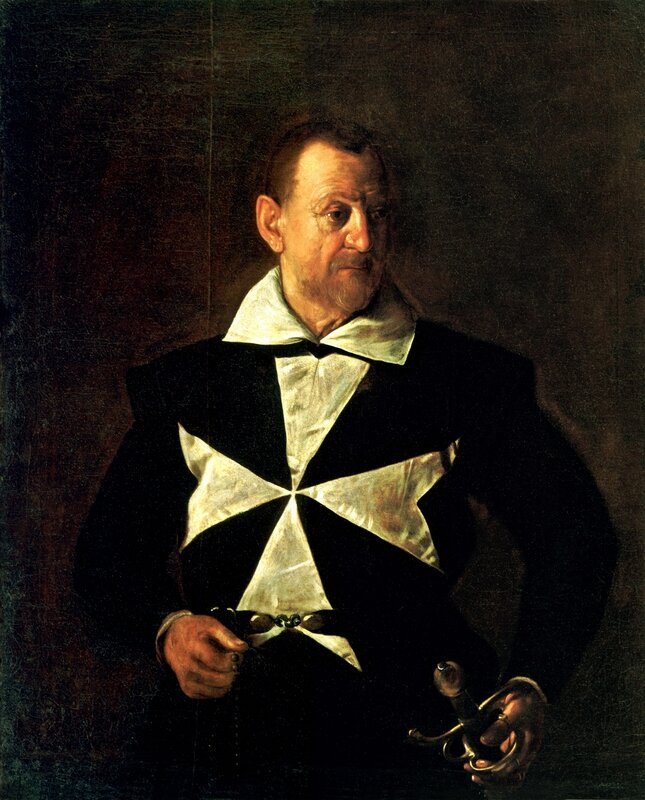 Fra Antonio Martelli, Knight Grand Cross of the Order of Malta, on loan from the Galleria Palatina, Palazzo Pitti in Florence, is a work made near the end of the painter’s life, when he was exiled in Malta. Perhaps hoping to secure a papal pardon for killing Ranuccio Tomassoni in Rome in 1606, Caravaggio endeared himself to the Grand Master of the Order of Saint John, Alof de Wignacourt, painting his portrait (now in the Louvre) and those of other important knights. Today the portrait of Martelli is seen as an autograph Caravaggio, but that consensus came after decades of study and examination by scholars. Maffeo Barberini, from the Corsini Collection in Florence, was recently reattributed to Caravaggio, and has never before been shown in the US. Said to be an early work, the painting depicts Maffeo Barberini, who was born into a noble Florentine family and was elected pope in 1623 (taking the name Urban VIII).

Caravaggio’s name and fame had been largely forgotten by 1908, when the Saint Francis in Meditation in the Capuchin convent of Santa Maria della Concezione on the Via Veneto in Rome was first attributed to Caravaggio and soon accepted by most experts. In 1968, another version came to light in a Franciscan church in Carpineto Romano, a small town outside of Rome. Despite its damaged condition, the scholar Maria Vittoria Brugnoli identified it as an autograph work by the artist. The two depictions of Saint Francis in solitary dialogue with a skull are incredibly similar. Adding to the challenge of attributing, dating and interpreting Saint Francis in Meditation is that numerous copies were made of the compelling composition, even during Caravaggio’s lifetime. No one has ever doubted that Caravaggio was responsible for the design of this profoundly moving image, though his early Roman biographers don’t specifically mention him creating a Saint Francis in Meditation. Despite years of discussion, the attributions of these paintings are still in dispute.

The exhibition continues the MFA’s ongoing special relationship with Italy. In September 2006, the MFA transferred 13 antiquities to Italy and signed an agreement with the Italian Ministry of Culture, marking the beginning of a new era of cultural exchange. It included the creation of a partnership in which the Italian government would lend significant works from Italy to the MFA’s displays and special exhibitions program and established a process by which the MFA and Italy would exchange information with respect to the Museum’s future acquisitions of Italian antiquities. The partnership also envisaged collaboration in the areas of scholarship, conservation, archaeological investigation and exhibition planning. Other significant loans have included the Senigallia Madonna by Renaissance master Piero della Francesca; the Capitoline Brutus, a rare bronze bust of a Roman statesman dating to around 300 B.C.; and the marble statue Eirene (Goddess of Peace); as well as masterpieces lent to the exhibitions Titian, Tintoretto, Veronese: Rivals in Renaissance Venice (2009) and Aphrodite and the Gods of Love (2011). Commentaires sur Enjoy a rare opportunity to see four paintings by, or attributed to Caravaggio at the MFA, Boston