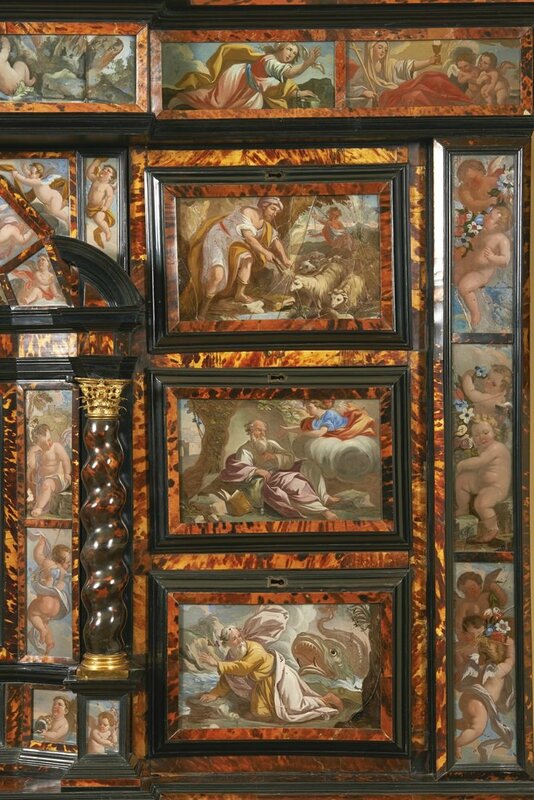 of breakfront form, with a panelled frieze above a portico on Solomonic columns with Corinthian capitols enclosing a mirrored and painted interior with three short drawers, with a drawer below and another above set with panels arranged in a stylised fan design, with three drawers on either side and slightly projecting side panels, the side and base moulding veneered in tortoiseshell, the conforming later base with four spirally-twisted front legs, with a panelled backboard and platform stretcher on flattenend bun feet, the painted glass panels with Biblical scenes including the Angel appearing to Elizabeth, Joseph being sold into Bondage, the Worship of the Golden Calf, Lot and his Daughters,Rebekeah and Eliezer at the well, the Sacrifice of Isaac, Elijah's dream, Jonah and the Whale, the other panels painted with cherubs; 184cm. high, 197cm. wide, 52cm. deep; 6ft.½in., 6ft. 5½in., 1ft. 8in., Estimation 40,000 — 60,000 GBP

This impressive and monumental cabinet combining exotic and precious materials such as tortoiseshell and ebony mounted with beautifully reverse painted glass panels depicting biblical themes, represents the apogee of Neapolitan cabinet-making in the 17th century. It conveys the appreciation of luxury and refined aestheticism of their anonymous patrons. These panels are commonly catalogued as being in the manner of Luca Giordano, athough no cabinet of this type has definatively been attributed to Giordano to date.

A number of these cabinets are recorded in Spain, where they are catalogued as Spanish, however, they are almost certainly of Neapolitan origin, as there were strong ties between Naples and Spain in the 17th century, Naples being ruled by the Spanish sovereign at that time. Similar pieces are listed and described in documents from the archives of the Prince of Avellino, the Duke of Calabritti and Cardinal Carafa, members of the Neapolitan aristocracy. A bill dated 22nd October 1679, was paid by Giovanni Battista Tara for a pair of ebony-veneered cabinets mounted with painted panels, see Alvar González-Palacios, op. cit., pp. 222-224. In 1676, Sir Thomas Isham, one of the earliest Grand Tourists returned from Naples with a pair of cabinets mounted with paintings on glass which are still at the family seat Lamport Hall in Northamptonshire.