LONDON.- On 15th May, the Fine Japanese Art sale will take place at Bonhams spectacular new head-quarters on London’s New Bond Street. Bonhams is among the world’s leading auction houses for Japanese art.

A silver okimono (sculptural ornament) of a hawk on a lacquered wood perch (lot 557) is one of the top pieces in the sale, estimated at £30,000-£35,000. The hawk stands on a detachable perch, one wing outstretched as if ready to take flight, each feather intricately engraved with fine lines and the eyes and legs of gleaming gold. The bird of prey standing on a detachable lacquered-wood perch from which a sumptuous brocade banner (moveable) is suspended, one wing outstretched in preparation for flight, its feathers chased in kebori, its legs of gilt, its eyes inlaid in gilt with shakudo pupils, signed in an oval silver reserve Yoshihiro; the lacquered-wood stand decorated in gold and silver hiramaki-e with overlapping bird feathers scattered over the roiro lacquer ground, the sides and ends of the frame with silver mounts carved entirely with a mass of chrysanthemum flowers in low relief, the lower section of the stand pierced in the form of a stylised hanabishi-mon and embellished in gold togidashi makie-e with crashing waves, signed in gold lacquer Kanshosai Toyo with kao; with double wood storage boxes, the lid of the inner box, titled Ginsei maki-e dai, taka okimono (Silver and maki-estand, standing object of a hawk), the inside of the lid indicating that the silver hawk on the stand was used for display in the tokonoma and was made by Shoami Yoshihiro as well as detailing that approximately 250mon (937.5g) and 192 mon (720g) of silver was used for the hawk and the silver mounts of the stand respectively and that the maki-e was decorated by Kanshosai Toyo.The bird 20cm (7 7/8in) high, the stand 52.2cm x 49cm (20 5/8in x 19¼in). (5).

These ingenious sculptures were first made by master armourers at the start of the Edo period (1615-1868) a peaceful time in Japanese history. Craftsmen who had previously met the Samurai's incessant demand for weaponry turned their skills to other pursuits. Japan's armourers demonstrated their mastery of metalworking by crafting ever more elaborate sculptures that perfectly mimic the natural world.

Other top lots in the sale include a fine and rare display shelf by Uematsu Hobi (1872-1933), one of the leading lacquer artists of his time, which is estimated at £40,000-£50,000. The piece is decorated in gold and black lacquer with flowers of the four seasons, including chrysanthemums, bellflowers, hydrangea and rose of Sharon, and applied throughout with silver fittings engraved with floral sprays. A magnificent lacquer display cabinet supported on four bracket feet, comprising sliding doors and a pair of hinged cupboards, the fronts, top, shelves, sides and reverse decorated with assorted flowers of the four seasons, the door fronts with flowering chrysanthemums, kikyo (Chinese bellflowers), fukinoto(butterbur flower stalks), tsukushi (horsetails),shirotsume (white clover) and sumire (violets), the inside of the doors with stylised pine and bamboo leaves, the sliding doors depicting from the left nadeshiko (pinks) and dandelions, and from the right daffodils andyamatachibana (coral berry), the top staggered shelf decorated with lilies, ominaeshi (valerian) and kudzu vine, whilst the top is decorated with hydrangea, horsetail, mukuge (rose of Sharon) and dandelions, all embellished in gold takamaki-e on a rich mura-nashijiground, applied throughout with silver fittings engraved with floral sprays, the inside of one door signed in gold lacquer Hobi saku; with wood storage box, titled Shiki kusabana shodana (Book Cabinet with Seasonal Foliage Design), attached with a paper slip with an inscriptionUematsu saku, shiki kusabana maki-e shodana (Maki-eBook Cabinet with Seasonal Foliage Design by Uematsu) with seal Matsu no in, the inside of the lid signed Hobi sei, attached with a small piece of paper inscribed Ikebukuro Inoue 1. 66cm x 74cm x 36.5cm (26in x 29 1/8in x 14 3/8in). (2).

Notes: Born in Tokyo the first son of the maki-e artist Uematsu Homin (1846-1899), Uematsu Hobi (see also lot 179) studied the technique of maki-e from his father and design from Kishi Kokei (1839-1922). Celebrated for his sophisticated pictorial style and immaculate technique, he is perhaps best known for a set of suzuribako andbunko with landscape design shown at the Paris Universal Exposition in 1900, but he won awards at numerous subsequent exhibitions, including the 8th, 9th, 11th, 13th and 14th Teiten.

A fine and rare early-19th-century sword cover with metal fittings is offered with estimates of £35,000-£45,000. The lacquered case is applied with a coiled copper snake and a climbing frog, while the metal fittings are inlaid in gold, silver and copper alloy with butterflies, dragonflies, grasshoppers, wasps and other insects.

Notes: Accompanied by a NBTHK certificate dated Showa 50 (1975). The wood blades each bear an attestation by Dr Sato Kanzan.

For the maker of the fittings, see Robert Haynes, The Index of Japanese Sword Fittings and Associated Artists, Ellwangen, Germany, 2001, no.04332.

Hamano Masanobu was born in 1773 and became the student of and heir to Hamano Nobuyuki. He was adopted into the Hamano family and was granted the honour of becoming the fourth Hamano master in 1793.

Among the highlights of a large group of arms and armour are five imposing full suits of armour, decorated in black lacquer, gold and coloured lace. Their fearsome iron masks with gaping mouths and dark eye sockets are hidden in shadow under the elaborate helmets. An exquisite 19th century suit with navy-blue lacing and a helmet adorned with a large gold hollyhock is estimated to sell for £12,000-£15,000. A small four-case inro and lacquer netsuke by Shibata Zeshin (1807-1891) is another of the sale highlights, with an estimate of £20,000-£30,000. It is decorated in gold takamaki-e (high-relief lacquering) and inlaid with pewter and mother-of-pearl to show three boats laden with firewood in a sea of formalised waves, a theme relating to a poem by the Buddhist monk, Jakuren (circa 1139-1202): Where has the spring gone? / By the harbour / in the mist / a boat laden with brushwood / drifts away down Uji River. 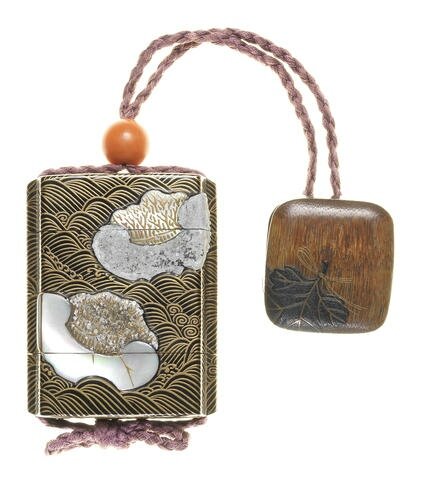 Lacquered in gold takamaki-e and inlaid in pewter and mother-of-pearl with three flat-bottomed work boats laden with shiba (firewood) floating on formalised waves, signed with scratched characters Zeshin sha; the hako-netsuke decorated in gold, grey and red takamaki-e andtetsusabi-nuri with a single sprig of kaji (paper mulberry) on the top corner of the cover and an itomaki (silk winder) and a poem slip on the sides of the box, the interior of matt gold, signed with scratched characters Zeshin; with two tomobako, one consisting of an ikkanbari(lacquered-paper) box titled Shibafune inro (boats laden with firewood), the inside of the lid signed Honami zo, Koetsu zo sha, Zeshin (Zeshin copied the one made by Koetsu, owned by the Honami family) with seal Komaand a wood box titled Koetsu saku Zeshin o mo, ikkanbaribako-zoe, Shibafune maki-e inro (Maki-e inrowith shibafune design, copied by the venerable Zeshin after one by Koetsu, accompanied by a lacquered-paper box), the inside of the lid signed Kakan'an Chikushin kan(examined by Kakan'an Chikushin) with seal Koma; together with an outer lacquered-wood storage box. The inro 6.1cm (2 3/8in) high. (4).

Notes: The theme of a boat laden with brushwood floating on the water relates to a poem by the Buddhist monk Jakuren (circa 1139-1202) included in the Shinkokinshuanthology (1205), Book 2:

Where has the spring gone? / By the harbour / in the mist / a boat laden with brushwood / drifts away down Uji River.

According to the art historian and lacquer researcher Takao Yo, Shibata Zeshin made at least four inro of this design, all of them based on an inro by Koma Bunsai (1811-1871) which was itself based on a supposed original by Hon'ami Koetsu (1558-1637). One of the four Zeshin inro belonged to the Matsuzawa (a wealthy merchant family), while the second belonged to the Momiyama family (a long line of high-ranking samurai bureaucrats) and both were accompanied by atomobako. A third, owned by the metal worker Kagawa Katsuhiro (1853-1917), was sold at auction in 1917 and is now believed to be in the Irving collection. This inrowas signed Zeshin on the base and had a tomobako, like the example offered here, bearing an inscription Hon'ami-ke zo, Koetsu saku, Zeshin sha. (1)

An outstanding series of 17th century to early 20th century paintings includes a pair of six-fold gold-paper screens by Ikegami Shuho (1874-1944), painted in ink and colours with pine trees and cranes. The pair of screens are offered for sale with an estimate of £10,000-£15,000. Born in Nagano Prefecture, Ikegami Shuho went to Tokyo, studied under Araki Kanpo (1831–1915) and began to show his work at the annual Bunten exhibition, winning third prize in 1914 and the special prize in 1916 and 1917. He was appointed an adjudicator of the Teiten Exhibitions in 1933. He excelled at both landscape and bird-and-flower paintings.

The sale also features a large group of Satsuma ceramics from the Meiji era (1868-1912), many of them from a single private collection. Satsuma was originally manufactured around 1600 in the far south of Japan but international events such as the 1873 Vienna World Exposition vastly increased the international popularity of the extravagantly painted and gilded ware. Soon potters from all over the country were creating their own versions and the word 'Satsuma' lost most of its geographical sense. As East-Asian culture was popularised and collectors of Japanese arts and crafts grew increasingly aware of Japanese lore and legend, the canny craftsman-entrepreneurs of Osaka and Kyoto adopted decoration including divine beings and characters from well known myths and legends. In an effort to maintain the connection with the Satsuma domain, some examples are also marked with the distinctive crest of the Shimazu family.

Among the most attractive examples of Satsuma in the sale is a large 'charger, painted by Sozan for the Kinkozan Company and valued at £2,000-£3,000. Finely decorated in enamel and gilt, it shows the tragic hero Minamoto no Yoshitsune and his men on the seashore, waiting to board a ship that will take them to exile on Japan's northern island of Ezo (presnet-day Hokkaido). The design, based on a near-contemporary print by Utagawa Yoshitora (circa 1836-1887), was chosen to appeal to the Western taste for Japanese myth and legend. Another outstanding piece of Satsuma ware (estimate £1,500-£2,500) includes a scene featuring the great print-artist Kitagawa Utamaro (1753-1806) painting a giant phoenix, or hoo on the walls of a house in the pleasure quarters of Edo (present-day Tokyo). Finely decorated in enamels and gilt, the centre depicting Minamoto no Yoshitsune and his retainers on the shores of a lake, gathered in front of a war curtain decorated with Yoshitsune's sasarindo (bamboo grass and gentian)mon (crest) drawn across the territory, all waiting to board an approaching ship that will take them to Ezo, the retainers carrying pole arms and war banners, blowing in the strong wind; signed Sozan for the painting in a gourd-shaped cartouche on the right and inscribed Kinkozan kore o tsukuru and the title Yoshitsune Ezo shimawatari no zu (Picture of Yoshitsune Crossing over to Ezo by Ship) in a banner on the bottom left, the reverse signed with seal Kinkozan zo; with tomobako titled Awata-yaki: kazarizara, Yoshitsune-kyo gunsen no zu (Awata ware: a display dish with a picture of Yoshitsune with battleships), the inside of the lid signed Kinkozan sakuwith seal Kin. 39cm (15 1/8in) diam. (2).

Notes: The design of Yoshitsune crossing over to Ezo is taken from a triptych print by Utagawa Yoshitora (fl.circa 1836-1887), published by Aritaya Seiemon circa 1843-1847. The subject depicted here is an alternative story to the end of a tragic hero, Minamoto no Yoshitsune (1159-1189) and his retainers. In his last battle in the Koromo River in Hiraizumi in 1189, he was attacked by an army of Fujiwara no Yasuhira and committed suicide. However, the legend says they managed to escape to Ezo (present day Hokkaido) where they were worshiped by Ainus as Gikyo Daimyojin (Great God Yoshitsune).