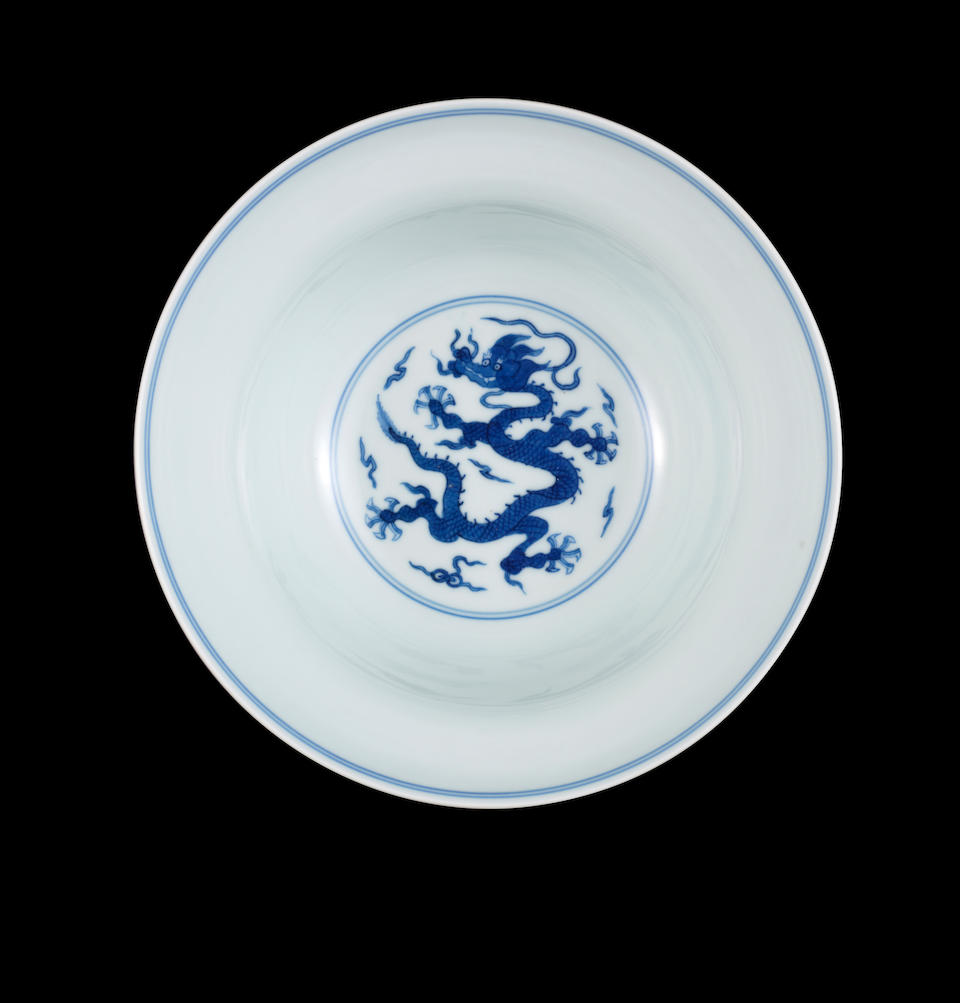 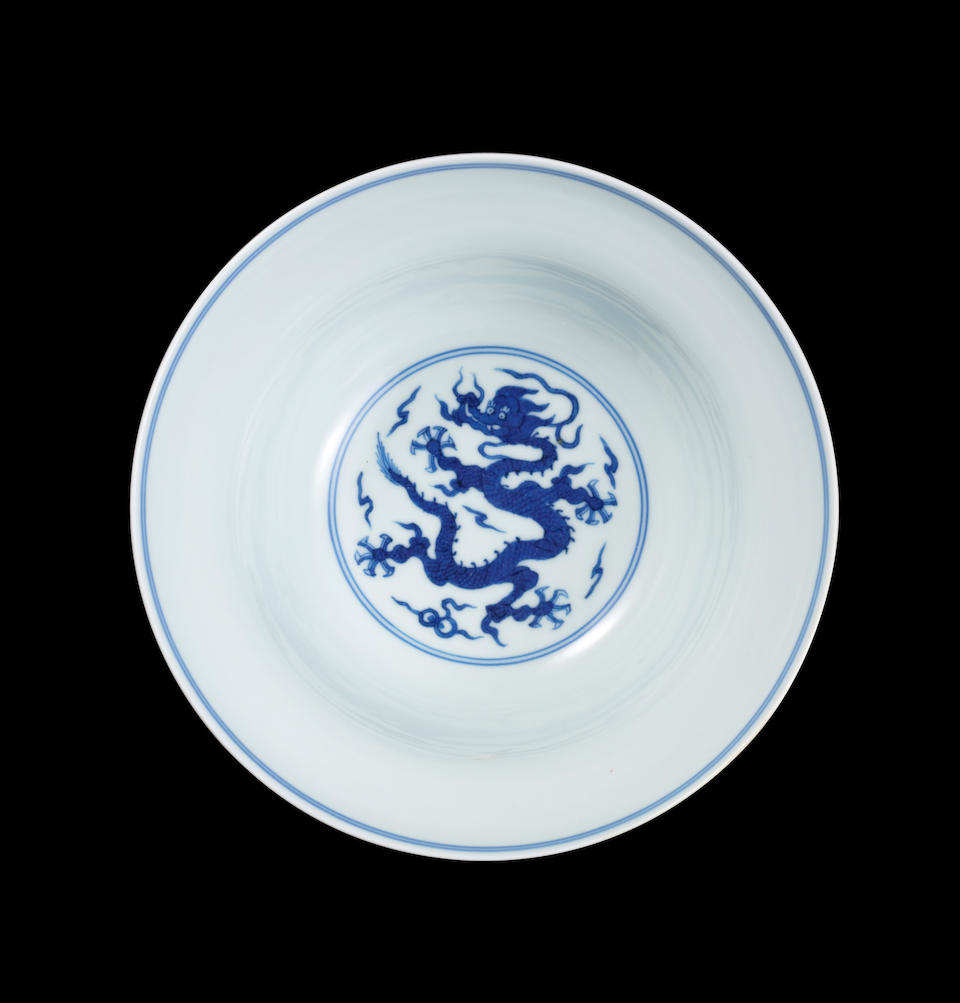 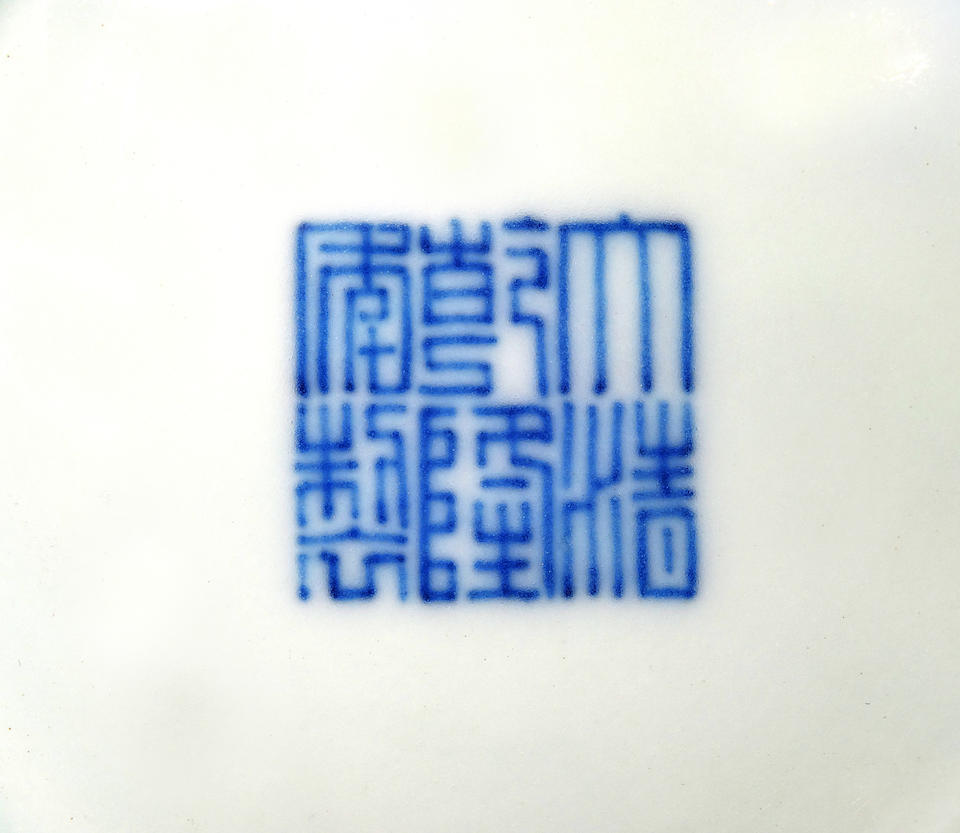 Each bowl finely decorated around the exterior in inky-deep blue tones, depicting a pair of scaly five-clawed dragons amidst scrolling clouds, one dragon in pursuit of the other whose head is turned backwards, the interior with a medallion enclosing a further dragon amidst flames in the centre, the base with an Imperial underglaze-blue zhuanshu seal mark, wood stands.

Note: As great lover and patron of various arts, the Qianlong Emperor's rule saw arguably the most spectacular works of arts and ceramics made. Blue and white porcelain wares in particular achieved in heights with greater variation and perfection of shapes of vessels, decorative techniques, glaze recipes and the quality of materials utilized. Under his reign, the techniques for firing of cobalt blue pigments were able to achieve deep and rich blue tones. The present pair of bowls exemplifies the high quality and stylistic achievements in porcelain production during the Qianlong period. This includes each bowl being perfectly formed with undulating stepped sides, the deep blue cobalt tones achieved on the carefully controlled painted decoration, juxtaposed on the pristine white body of the porcelain.

The Qianlong Emperor was also famous for his love of innovative and unusual vessel shapes, including those which were ornate interpretations of archaic bronzes as well as the perfection of more subtle and simple forms. Ogee-form dishes and bowls seem to appear first in the Qing Dynasty. The term ogee originates from an S-shaped trim piece of moulding. Ogee-form examples with various decoration have also been sold through auction including a Kangxi doucai bajixiang bowl, previously in the Idemitsu Collection, sold at Christie's Hong Kong, 31 May 2010, lot 1871; and a blue and white Bajixiang dish, Qianlong mark and of the period, sold at Christie's Hong Kong, 30 May 2012, lot 4176.

As a symbol of the Emperor himself, the dragon is a most appropriate decoration for an Imperial ware such as these pair of bowls. In Chinese history, the dragon traditionally symbolises ultimate auspiciousness and authority. The mythical beast represents power in its total control over all the natural elements and was also regarded as the bringer of luck and prosperity to those who are worthy. The Emperor, who was accorded as being the Son of Heaven, was therefore always represented by a dragon to convey his political power and strength. Beautifully represented by the current lot, each bowl is depicted with a pair of dragons encircling the cavetto, clearly defined by the bold styles adopted by the Qianlong Emperor, where the mythical being is depicted with the utmost ferocity and overwhelming presence, showing sharpened five-claws issuing from powerful limbs with meandering bodies in flight.

Compare an earlier prototype to the current lot dated to the Yongzheng period with the same decoration and ogee shape, illustrated in Exhibition of Ch'ing Porcelain from the Wah Kwong Collection, Hong Kong, 1973, pl.59. The porcelain from the early years of the Qianlong reign as exemplified by the current lot is often difficult to separate from that of the Yongzheng era. This is not surprising as a selected compilation of designs had been gathered to guide the production of Imperial ceramics in 1729, led by Tang Ying, whom later became the director of the kilns at Jingdezhen. Hence many of the Yongzheng period designs worked by experienced artisans under Tang Ying's leadership would have served the Qianlong Emperor during his succession to the throne in 1736.

The elegance of the ogee bowls have been so cherish and highly regarded by the Imperial court, that related bowls of similar form with dragon decorations have inspired similar production of porcelain by Emperors Jiaqing and Daoguang. Compare such examples sold at auction, one with Jiaqing seal mark and of the period, sold at Christie's Hong Kong, 1 June 2011, lot 3924; a pair of Daoguang seal mark and of the period bowls, sold at Christie's New York, 15-16 September 2011, lot 1262. See also another another comparable example sold in our London rooms, 4 November 2013, lot 177.

Commentaires sur A pair of blue and white ogee-shaped 'dragon' bowls, Qianlong seal marks and of the period (1736-1795)