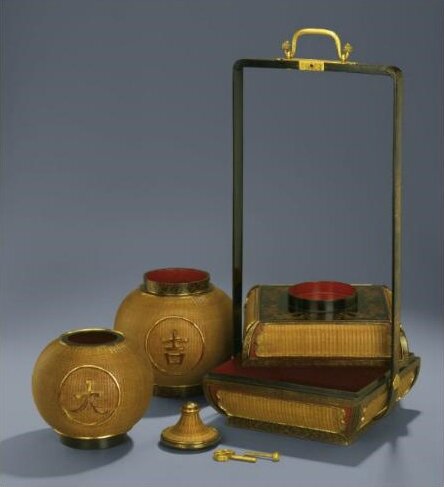 The box is composed of three parts, all lined with lacquer and covered in woven bamboo. The bottom part comprises a rectangular box and cover, decorated on four sides with woven-bamboo cartouches. The top of the cover is lacquered brown, incised with four ferocious dragons filled with gilt and red pigment surrounding a circular receptacle containing a compressed circular box which forms the lower part of a double gourd. The circular box is lacquered on the inside and wrapped with bamboo-weave on the outside, flanked on each side with a roundel enclosing the character Ji rendered in gold lacquer, the mouth and foot rims lacquered brown, incised and gilt with leafy scrolls. It is topped by a similarly shaped and designed box, forming the upper part of a double gourd, lacquered in gold with a roundel containing the character Da. The conical-shaped cap is secured to the overhead lacquered handle with two gilt-metal pins, underneath another smaller scroll-shaped gilt-metal handle. 25 1/2 in. (64.8 cm.) high. Estimate HK$600,000 - HK$800,000 ($77,744 - $103,658). Price Realized HK$1,240,000 ($160,633)

Notes: The current box set exemplifies the ingenious combination of aesthetics and functionality in vessels made for the Imperial court. The set is devised intelligently to ensure it is easily portable with the boxes fastened securely in the correct position by having two interlocking pins securing the top cover to the overhead handle. It would have been used as a picnic box containing utensils for Imperial members, possibly commissioned by the Imperial kitchen.

The Beijing Palace Museum has a very similar double-gourd box set of approximately the same size, similarly constructed encompassing three boxes wrapped with woven bamboo and an overhead handle fastened by two gilt pins. Attributed to the Kangxi period by the Museum, this set contains the original set of utensils including dishes, bowls, chopsticks and a spoon, providing us with the context of how the current box set would have been used within the palace during the Qing dynasty. The Palace Museum example was included in the exhibition Qing Legacies: The Sumptuous Art of Imperial Packaging, Macau, 2000, pl. 75