NEW YORK, NY.- At the close of the eighteenth century, while wars and revolutions rocked Europe, landscape art began a quiet transformation. British and German artists were pioneers in forging a new type of landscape, abandoning the certainties and formulas of the past in favor of a revitalized representation of the natural world. A Dialogue with Nature: Romantic Landscapes from Britain and Germany (May 30 – September 7) traces the unfolding of this new Romantic sensibility with a selection of drawings, watercolors, and oil sketches chosen from the renowned collections of the Morgan Library & Museum and London’s Courtauld Gallery—capturing its beginnings in the Age of Enlightenment to its full flowering in the Romantic art of J.M.W. Turner (1775–1851) and Caspar David Friedrich (1774–1840).

These Romantic artists delighted in the particular rather than the general, and found pleasure in things transitory more than things permanent. They accepted the subjective nature of our experience of reality and celebrated the individual imagination. Perhaps above all, they understood and explored the inherent tension between direct observation of the visible world and that of the imagined—a tension that Caspar David Friedrich aptly summed up as a “dialogue with nature.”

It is relatively rare to see British and German drawings of this era side-by-side. The more than thirty works in the exhibition were chosen not only to exemplify Friedrich’s words, but also to offer a fresh look at stylistic similarities and differences in the approaches of the two schools.

“We are delighted to partner with the Courtauld in presenting this exhibition,” said William M. Griswold, Director of the Morgan Library & Museum. “Its unparalleled holdings of British drawings complement the Morgan’s strength in German works on paper. This is the first in a projected series of collaborative projects in which the two institutions will present focused exhibitions that are open and exploratory in nature rather than broad, definitive statements on a subject.”

The Exhibition
“Everything tends towards landscape.” —Philipp Otto Runge, 1802
As the German artist Philipp Otto Runge (1777–1810) suggested, landscape emerged as the Romantic genre par excellence. As the eighteenth-century model of the universe as a static mechanism was gradually rejected in favor of a more organic view of the natural order, so artists abandoned the landscape formulae of their forebears in favor of a new and distinctive treatment of landscape art. Artists turned to sketching out of doors and desired to be seen working en plein air. The sketches and studies made from nature began to be highly valued as the expression of a direct encounter with the natural world. But plein-air studies of landscape scenery alone could not satisfy the new desire for fidelity to nature. The details of landscape—plants, trees, clouds—had to be studied intently as individual elements before a landscape art that was truly faithful to nature could be forged. Nothing was too insignificant and the value of such intense scrutiny is reflected in these drawings that explore the natural word in all its aspects: from studies of transitory clouds and shadows, to the solemn dignity of ancient trees.

Nature and Imagination
The Romantic spirit was above all manifested in an extraordinary visionary capacity, a rejection of the Enlightenment’s focus on sterile materialism and its faith in the power of reason and the innate benevolence of man. In the visual arts, Romanticism was marked by a novel exploration of two worlds: that of nature, and that of the imagination. While fidelity to nature was praised in landscape, there was also a sense in which the imaginative power of the artist could probe beyond the world of mere appearances to capture the essence of things. Artists responded by escaping from the confines of simple imitation of nature and turning to things both above and within. Artists like Samuel Palmer in Britain or Caspar David Friedrich in Germany strove to capture this new vision and to use landscape art to express profound sentiments that had once been thought the exclusive province of the exalted genre of history painting.

The Romantic Sublime
Nature, once perceived as dependably constant and explicable by universal rules, came to be seen by the Romantics as a living force that developed through time in a progressive and dynamic way. This dramatically altered perceptions of the place of humanity within nature. Human life was increasingly recognized as being implicated in this developmental order rather than simply standing over and apart from nature. Where earlier artists strove to tame nature and present an image of the world as ordered and benign, the Romantics now sought to depict the terrible immensity of nature and the power of the natural word when pitted against the frailty of human culture. The vastness of mountains or the forces of untamed nature became the preeminent Romantic obsession.

The Morgan – Courtauld Partnership
The Morgan Drawing Institute, established with a generous gift from Trustee and noted collector Eugene V. Thaw, will regularly partner with The Courtauld Gallery’s IMAF Centre for the Study and Conservation of Drawings. Together, the two institutions host a Morgan-Courtauld Fellow and undertake joint projects to advance the study and appreciation of drawing. The first Morgan- Courtauld Fellow was Matthew Hargraves, a curator at The Yale Center for British Art, and one of the organizers of this exhibition. 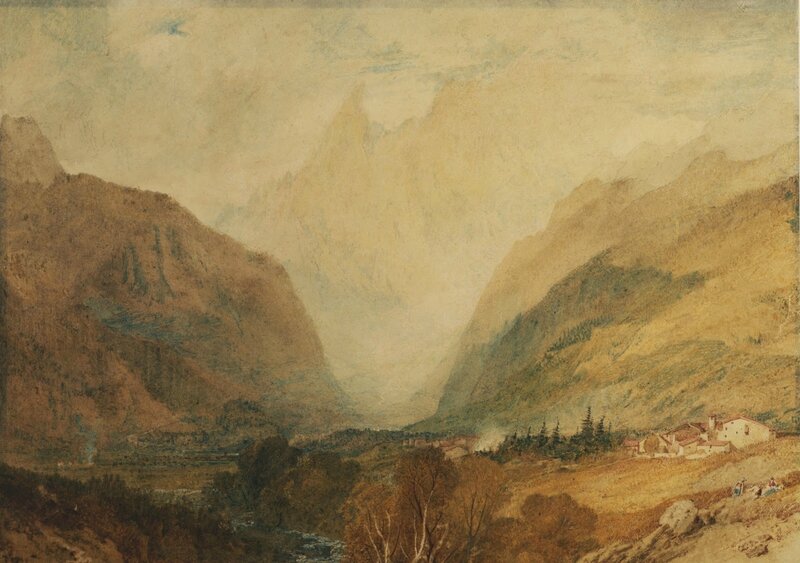 Joseph Mallord William Turner, Mont Blanc, from Above Courmayeur, ca. 1810. Watercolor and graphite, some drawing into the wet paint with a sharp point and extensive scraping out. The Courtauld Gallery, Samuel Courtauld Trust: Gift in memory of Sir Stephen Courtauld, 1974