"Decorated Porcelains of Dingzhou. White Ding wares from the collection of the National Palace Museum'

"Decorated Porcelains of Dingzhou. White Ding wares from the collection of the National Palace Museum' Ding wares come from a region of northern China formerly known as Dingzhou (Ding prefecture); the white porcelains made there have been prized since the Song dynasty (960–1279). Archaeologists have found the main Ding kiln complex on the border of present-day Quyang in Hebei province, unearthing a complex cluster of kilns covering a wide area and capable of rich production. The kilns began to flourish during the Tang dynasty (618–907), and soon gained fame throughout northern China. By the late Tang and Five Dynasties periods in the tenth century, Ding porcelains had become highly popular among the Chinese aristocracy in the Yangtze and Yellow River regions and even among the Khitan Liao in present-day Manchuria. The refinement of Ding ware production techniques continued into Song and Jin (1115–1234) times; the ware came to be characterised by the use of coal as kiln fuel, the adoption of the "upside-down" firing technique to improve quality, and the use of incised or moulded decorations on the vessel surfaces. Not only were these wares given as tribute for use in the imperial courts of the Northern Song (960–1127) and Jin dynasties, but they also broke through border barriers, as large numbers of them have been found in Liao and Southern Song (1127–1279) grave burials. These wares have thus earned their reputation as "the best under Heaven".

The Northern Song poet Su Dongpo (1037–1101) sang the praises of Ding decorated porcelains that "rival the beauty of carved red jade", and the Jin-dynasty scholar Liu Qi (1203–1259) wrote about a decorated Ding-ware vessel whose white colour was "the most esteemed under Heaven", testifying to the huge popularity that decorated Ding white porcelains enjoyed at the time. The decorative motifs were either carved into the unglazed white-clay vessel bodies or impressed into the clay using moulds; thus decorated, the clay bodies were then covered with a transparent glaze that collected more thickly within the incised or impressed lines and thus became darker in colour, clearly revealing the decorative designs and greatly increasing the resplendent beauty of the austere, ivory-white vessel surface. Such refined and understated beauty, with its endless variety of patterns, has become the paragon of white porcelain in the eyes of connoisseurs, and both official and private kilns have competed to imitate it since Song times.

There are nearly eight hundred porcelain vessels of the Ding type in the National Palace Museum collection; most bear decorative motifs, whether fluidly incised or moulded in rich patterns, and all display the astonishing variety of designs created by the Song craftsmen. This exhibition is scheduled in two parts, with a partial changeover in May 2014 to allow viewers to experience the rich breadth of the Museum’s Ding ware collection. 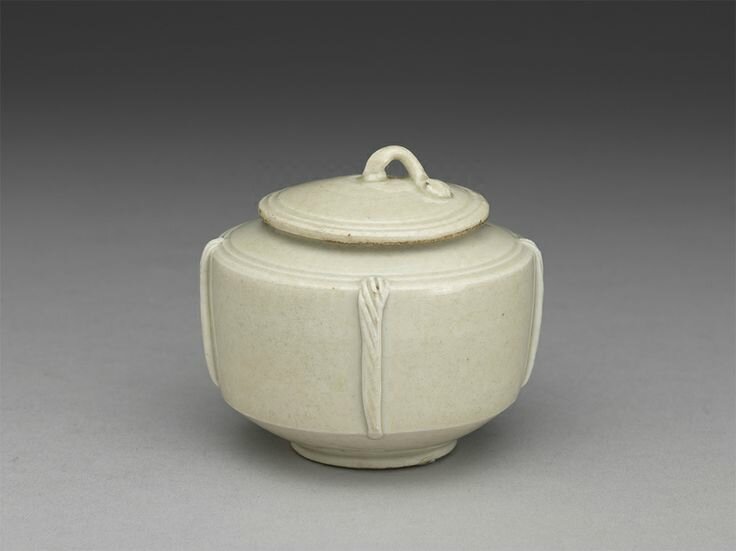 In the late sixth century, a conscious effort to develop white ceramics arose in northern China. By Sui and Tang times (sixth to tenth centuries), kilns producing white porcelain were centred on the Xing kilns but had spread across Hebei and Henan provinces; their production was abundant, and historical accounts of the time record that their wares were commonly used by rich and poor alike. The Ding kilns at Quyang in the Dingzhou region of Hebei also began to flourish after the middle of the Tang dynasty, in the early ninth century.

Early white porcelains display a variety of lustrous shades; many of the otherwise-plain vessels are decorated with relief-carved decoration, and often have shapes that strongly reflect the influence of metal-vessel types. Some Ding porcelains are inscribed with the character guan (official) or xinguan (new official), and appear to have been supplied for use in the imperial court; contemporaneous documents and monument inscriptions consistently indicate that during middle Tang Dynasty to the Five Dynasties period (9th-10th century), court officials were designated to supervise porcelain production or taxation at the Ding kilns. 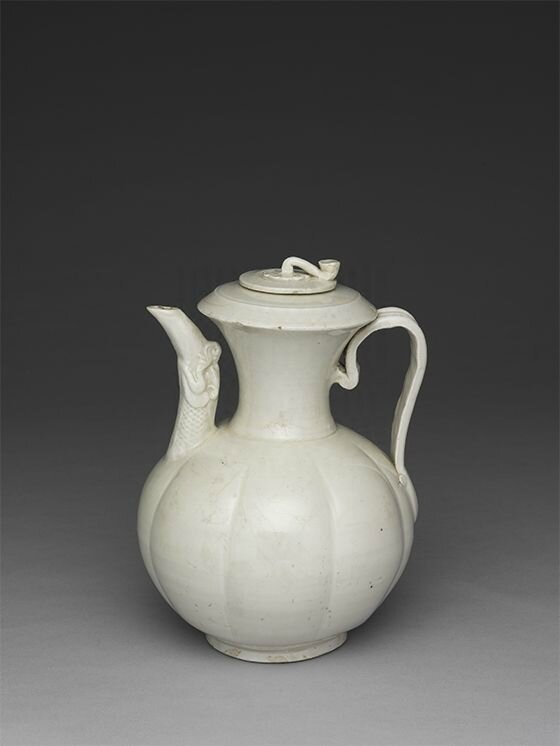 The decoration of Ding ware.

In the mid-Northern Song (eleventh century), China was at peace; with a stable society and flourishing production, there was a demand for high-quality goods in the bustling cities. Porcelains came into common production and one kiln after another rose to fame. The Ding kilns improved production quality by means of saggar support rings and the "upside-down" firing process, and broadened the decorative range of their wares through the use of incised or moulded motifs; as a result, they were able to produce porcelain vessels in large numbers while maintaining consistent quality, and to supply a large market both inside and outside China.

Ding-ware plates and bowls for everyday use are very consistent in form. Their rims are generally un-glazed, which facilitates the application of metal rim-bands around them and thus enhances their beauty. The unglazed rim was a result of the "upside-down" firing process, in which the rim of each Ding-ware bowl or plate was left unglazed in order to allow it to be turned upside down and placed rim-first on a round supporting ring; the ring and vessel were then stacked atop the support-ring of the vessel below. Numerous vessels could be stacked in this way for firing, with the rings coming to resemble a tubular saggar and containing a series of bowls or plates of the same shape that did not touch each other. Thus on the one hand, the space saved inside the kiln allowed a much larger quantity of vessels to be fired simultaneously, while on the other hand, supporting the vessels by their rims ensured that vessels with broad rims, small feet and thin walls would not lose their shape during the firing process. This innovation in porcelain kiln-firing was quickly adopted at many other kilns, spreading to sites as far away as Jiangxi and Fujian. Around the middle of the eleventh century, Ding kiln craftsmen began decorating their porcelain vessels with incised decor, using broad-bladed carving tools in a variety of techniques to quickly execute lines that mimic the variations in thickness of brush-strokes. They were also adept at using comb-like multi-pointed tools to incise multiple parallel flowing lines amid the main decorative motifs, enhancing the fullness of the flowers and leaves or mimicking the fluidity of rippling water.

Among the motifs incised, most commonly seen are lotus or day-lily blossoms and leaves, winding elegantly and spontaneously around the vessel surface. The soft and deftly-executed lines of other motifs, like wild geese in a pond or swimming fish, sketch out a song in praise of nature, while little dragons with a calf-like faces or big dragons striding with heads held high are wonderfully buoyant and animated. 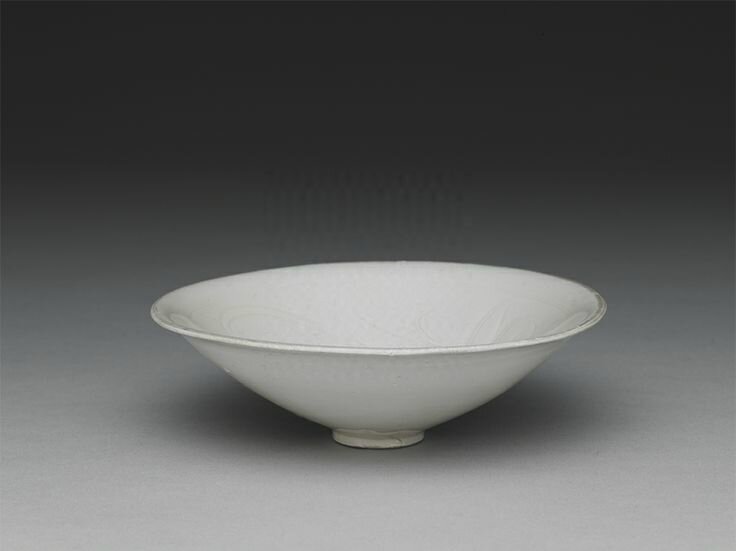 In the late Northern Song period (early twelfth century), the Ding-ware craftsmen used mushroom-like moulds to neatly form the vessel shapes while simultaneously moulding their decorative motifs. Many of the surviving moulds themselves bear carved inscriptions that date them to the Jin period (late twelfth and early thirteenth centuries), reflecting the increasing popularity of moulded-decor techniques at that time. Use of such moulds allowed the manufacture of large numbers of vessels identical in both shape and decoration, thereby meeting the needs of a broad market.

These meticulously-crafted moulds were similar to those used to cast gold and silver vessels. They commonly produced porcelains with compartmented walls or chrysanthemum-petal shapes, decorated with flying birds dancing among luxuriant flowers, waterfowl bobbing amid finely detailed ripples, vigorous little-dragon patterns, densely-layered propitious clouds, or spreading flowers and leaves densely and seamlessly packed together, all displaying the unique compositions and designs of the mould-carvers. 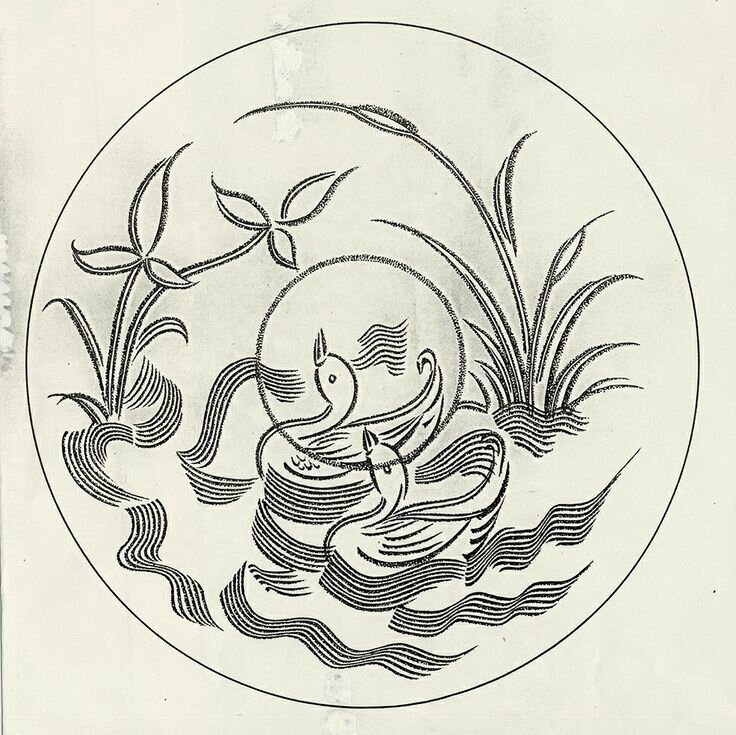 Ding porcelains and their influence

After the middle Northern Song (eleventh century), kilns producing white porcelain proliferated throughout northern China. These included established kiln-sites at Jingxing, Cizhou, Huozhou, Gongxian and Jiexiu as well as kilns, now known only from documentary records, at Suzhou and Sizhou, all of which imitated Ding-ware incised and moulded decorative motifs or the "upside-down" firing technique. There are also records of a "Southern Ding" ware, as archaeological excavations have uncovered evidence of a fair amount of conscious imitation of Ding wares at southern Chinese kiln sites like Jingdezhen, Jizhou, Xuanzhou, Nanfeng, Guangze, and Shaowu. The literati of the Ming period (1368–1644) prized Ding wares, and many imitations proliferated; even such imperial wares as Yongle(1403-1424) and Qianlong(1736-1795) white porcelains also clearly reflect a reliance on Ding ware as a model.