LIVERPOOL.- On the centenary of her death a new exhibition at the Lady Lever Art Gallery explores the role of Jane Morris as Dante Gabriel Rossetti's chief muse and the embodiment of Pre-Raphaelite beauty.

Rossetti's Obsession: Images of Jane Morris opens from 20 June to 21 September 2014. Bringing together rarely displayed works, the exhibition focuses on Rossetti's fixation with Morris and his depiction of her as the ultimate femme-fatale.

More than 30 paintings, drawings and photographs of Morris, including a number which were used as studies for some of Rossetti's most famous works, feature in the exhibition.

Sandra Penketh, Director of Art Galleries said: “More than 150 years since the founding of the Pre-Raphaelite Brotherhood, this radical, vibrant movement still excites audiences today. Jane Morris as a model, muse, wife, lover and artist in her own right was at the heart of this explosive group which challenged the art establishment of the time. Her striking features, tumbling long hair and haunting stare appear in so many of Rossetti's finest works that they have become indelibly associated with the movement.

"The Lady Lever Art Gallery has one of the best Pre-Raphaelite collections in the world so we're delighted to tell the story of the relationship between two of the movement's chief protagonists."

Born Jane Burden, Morris came to the attention of Rossetti and the Pre-Raphaelites in 1857. In 1859 she married William Morris, but shortly after began a long affair with Rossetti.

Sharing a deep emotional attachment, Morris and Rossetti's relationship was the source of many of Rossetti's mid-to-late paintings, regarded by many as being among the best of his career. The exhibition includes the studies Pandora (1878), La Donna della Finestra (1870) and La Donna della Fiamma (1870) from this period but it is the painting Proserpine (1882) which had the deepest resonance with the couple.

In classical mythology Proserpine (also known as Persephone) was condemned to spend six months of the year in the Underworld. While away the world turned cold and dark and crops did not prosper until her return, when the weather improved and the land was fertile again. This was a painful parallel for Rossetti who had just spent an idyllic summer with Morris but was to be parted from her again for the winter.

Rossetti's obsessive depictions of Morris often cast her in mythological roles. Tender drawings, include a number of her as Astarte, an Ancient Greek goddess and to Rossetti the ultimate symbol of feminine power. This series of pen and ink, pastel, charcoal and graphite drawings expose a seemingly exhaustive effort to capture Morris’ beguiling beauty and her hold on him.

The exhibition also gives a small insight into Morris's life away from Rossetti's gaze. A stunning tapestry (267 x 150cm), designed by her husband William Morris and produced by Morris and her daughter Jenny, reveal a skilled embroiderer and an important member of the Arts and Crafts Movement. It is also a rare example of the collaboration between three members of the Morris family.

In later photographs and a drawing of Morris by Evelyn de Morgan, the striking features which so mesmerised Rossetti 20 years earlier are still visible, but by this time her famous thick hair is white and the alabaster skin, lined. These final images of the exhibition no longer evoke the idealised images of youth, myth and femininity, but instead a real woman with depth and passions of her own. 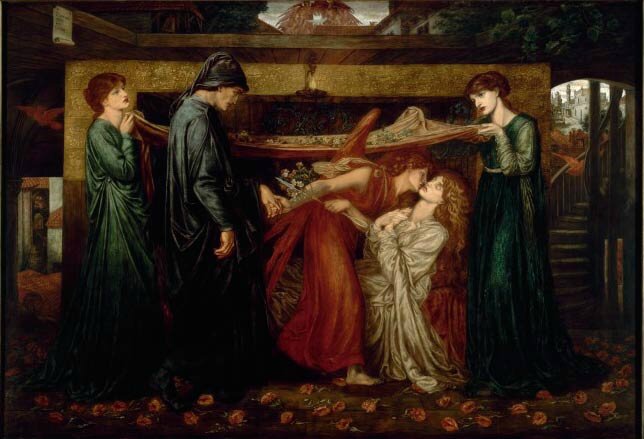 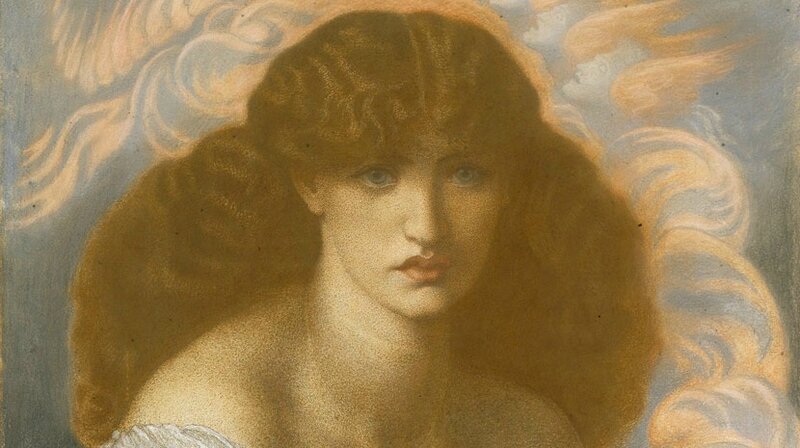