"El Greco and modern painting" exhibition at The Prado

"El Greco and modern painting" exhibition at The Prado 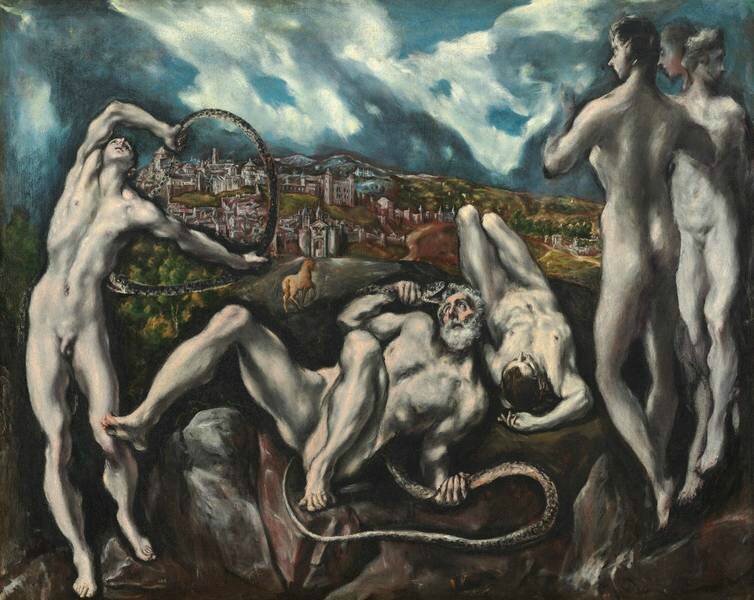 MADRID.- Opening at the Museo del Prado today, 24 June, is the exhibition El Greco and Modern Painting, co-organised with Accíon Cultural Española (AC/E). It will be officially inaugurated this afternoon by Her Majesty the Queen. Sponsored by Fundación BBVA, it includes around 120 exhibits that reveal the decisive influence which El Greco had on the origins of modern painting. Among the works on display are the artist’s Laocoön and The Vision of Saint John , both loaned from the United States and not included in the recent exhibition in Toledo, Picasso’s The Burial of Casagemas and Cézanne’s interpretation of Lady in an Ermine Wrap , to be seen in Spain for the first time.

The exhibition’s eight sections reveal the complexity and range of El Greco’s influence, starting with the enormous interest that he aroused among the most innovative French painters such as Manet and Cézanne and among leading Spanish painters such as Rusiñol and Zuloaga, among others. The exhibition also analyses the artist’s ongoing influence on Pablo Picasso, the key figure in the creation of the numerous trends that revolutionised the visual arts in the 20th century. Also on display are works by other artists associated with Cubism who evolved towards other approaches, including André Derain, Robert Delaunay, Diego Rivera and Amedeo Modigliani.

The inclusion of books on El Greco that helped to extend knowledge of his work by authors such as Manuel Bartolomé Cossío, August Mayer, Julius Meier-Graefe and Maurice Barrés will allow visitors to appreciate how the rediscovery of El Greco and his oeuvre inspired modern painters.

Expressionists such as Beckmann, Macke and Kokoschka, Jewish artists of the School of Paris such as Soutine and Chagall and the poetic Surrealism of Masson and Domínguez are all represented in the exhibition through works that clearly reveal El Greco’s influence.

Another issue analysed in El Greco and Modern Painting is the artist’s particular importance for the development of modern painting in South America and the USA, where the most expressive facets of his work fascinated the Mexican artist José Clemente Orozco and the Americans Benton and Pollock.

Finally, the exhibition explores the role of El Greco in the angst-ridden, expressive figuration of the post-war era, as evident in the work of Alberto Giacometti, Francis Bacon and Antonio Saura, some of whom executed specific homages to the artist.

The exhibition’s structure
The modernisation of painting. From Manet to Cézanne
The first section of the exhibition looks at 19th-century Spanish painters’ interest in the work of El Greco. Mariano Fortuny appreciated the freshness of his use of colour, capturing it in his watercolour The Trinity, which is displayed alongside El Greco’s original. Fortuny’s brother-in-law Ricardo de Madrazo also produced skilful copies of El Greco’s works such as Elderly Man. This fascination with the artist was also felt by American painters such as Chase and French ones including Manet. The latter may have known El Greco’s Annunciation exhibited in this section, at that date in the collection of Baron Taylor. Its transparent colours and luminosity influenced Manet’s Dead Christ with Angels.

This section concludes with an analysis of the connection between Cézanne and El Greco as the basis for one of the concepts underlying the origins of modern painting, given that both painters had a decisive influence on Cubism and Expressionism. Cézanne’s Bathers and Lady in an Ermine Wrap after El Greco are clear examples of this influence. Shown alongside them are copies of two publications that contributed to the dissemination of Lady in an Ermine Wrap: Annals of the Artists of Spain by William Stirling Maxwell, and Histoire des peintres de toutes les écoles. École espagnole by Charles Blanc. Picasso and Cubism
This section analyses Picasso’s successive approaches to El Greco’s work. His drawings of the late 19th and early 20th centuries reveal his interest in the artist, an influence that would become extremely pronounced in works of the Blue Period such as Evocation. The Burial of Casagemas, which looks to The Burial of the Count of Orgaz, and The Frugal Meal, which reflects the eloquent gesturalism of the hands in El Greco’s Saint Peter and Saint Paul. Another focus of interest in this section is the way in which El Greco’s work played a key role in the origins and development of Cubism, given that some of the artists influenced by Picasso were in turn inspired by El Greco, including Derain in his Portrait of Iturrino, Modigliani in his portrait of his friend Paul Alexandre, and the Czech Cubists Emil Fila and Procházka. Zuloaga and Picasso
This section reveals the esteem in which El Greco was held by Spanish artists from the 1890s onwards, particularly by the Basque painter Zuloaga. In My Friends, Zuloaga portrayed a group of Spanish writers who appreciated El Greco’s work, depicted below that artist’s Vision of Saint John, a work that Zuloaga himself owned (now in the Metropolitan Museum of Art, New York). Zuloaga also painted Maurice Barrès, the author of the influential book El Greco or the Secret of Toledo, of which a copy is displayed in the exhibition alongside the portrait. Also to be seen in this section are two portraits by Sorolla of two figures who were among the most important champions of El Greco: the Marquis of Vega Inclán, founder of the Casa Museo del Greco, and Manuel Bartolomé Cossío, author of the first major monograph on the artist, of which a copy is displayed here.

Rusiñol was another key figure in the rediscovery of El Greco, as evident in his friend Ramón Pichot’s portrait of him. Pichot depicts Rusiñol in the pose of the portrait by El Greco that most influenced modern painters, namely Man with his Hand on his Breast. Orphism and its influence
The exhibition moves on to focus on Orphism, one of the derivations of Cubism and the movement most closely associated with El Greco. Delaunay, its inventor, was inspired by Saint Sebastian for his painting Gypsy Man. Rivera also reveals a perfect fusion between the legacy of El Greco and Cubism in his monumental Adoration of the Virgin and Child, on display in this section. Northern European Expressionism
The exhibition includes copies of various publications that reflect El Greco’s role in modern painting. One example on display in this section is The Spanish Journey by Julius Meier-Graefe, a text that testifies to Expressionism’s rediscovery of El Greco in Germany, Austria and elsewhere in northern Europe. Austrian artists such as Schiele and Kokoschka and Germans such as Macke, Beckmann, Hofer and Steinhardt were influenced by an important version of The Disrobing of Christ in the collection of the Alte Pinakothek in Munich, and by the Laocoön. The Dutch artist Korteweg produced an exceptionally free version of El Greco’s original, exhibited in this section. Views of Toledo and El Greco in other Expressionist art
This section displays examples of the assimilation of El Greco’s work evident in paintings such as Soutine’s Praying Man. Its ascending composition, powerful colour and long, undulating brushstrokes reveal the influence of the former’s style, while Chagall’s Vision looks to El Greco’s Annunciation in its composition and subject matter.

Toledo and its surrounding landscape as interpreted by El Greco are also present in this section as the starting point for compositions by painters including Rivera, Zuloaga, Bomberg and Masson, the latter affiliated with Surrealism, as was Óscar Domínguez.

The United States and South America
This section presents El Greco as the model and reference point for American artists of the 20th century, who saw him as a stimulating example due to the fact that he trained in different artistic cultures. In Mexico he inspired the great mural painters such as Diego Rivera and Orozco, the latter looking to El Greco for his Prometheus, as did the Chilean Matta in Psychological Morphologies. Pollock’s interpretation of El Greco, which was influenced by his teacher Benton, is represented in this section with the copies that he made of illustrations in Maurice Legendre’s book on the artist, of which a copy is included in the exhibition. Figuration after World War II
The exhibition concludes with more recent interpretations of El Greco’s painting in the light of the devastation of World War II and focusing on an angst-ridden expressionism. Works such as Bomberg’s Hear Oh Israel, which can be related to Christ embracing the Cross, the foreshortening in Bacon’s Reclining Woman, which derives from the soldier in the foreground of The Resurrection, and copies and portraits by Giacometti and Antonio Saura all communicate a spiritual energy characteristic of El Greco.