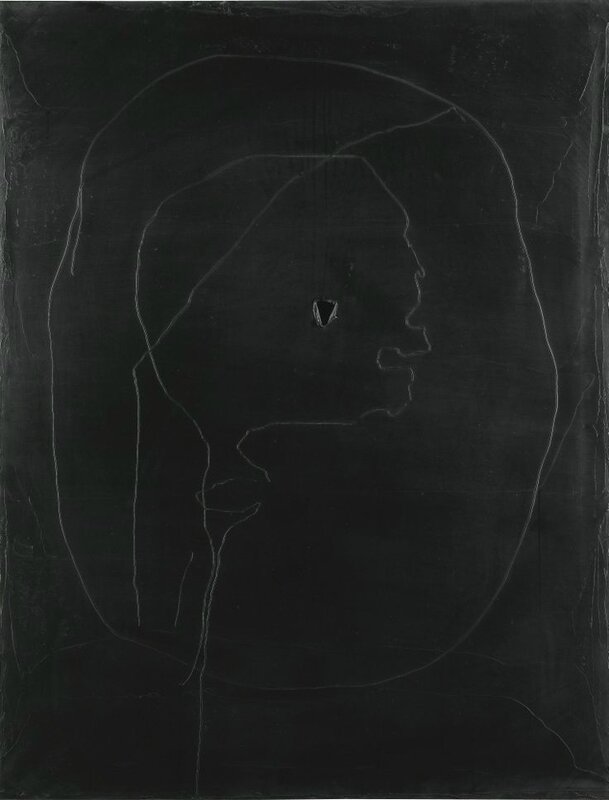 Note: By 1961, Fontana was into the last decade of his life, as prolific in production as ever, and relishing the creative freedom that his fame and influence had afforded him. That sense of creative freedom is abundant in this work. Concetto Spaziale forms part of the Olii series, executed between 1960 and 1968. It is one of only a very small number from this group that were executed in black. All of the works in the series are oil on canvas, and all are classic examples of the “naturalness and inventive originality of his poetic gesture” (Enrico Crispolti, Fontana, Milan 1999, p. 43).

Indeed, it is this sense of gesture that appears to be the dominant feature of the present work. Cursive lines are scratched into lyrical meanders, circling one central hole, punched through the canvas. The smooth perimeter grooves are juxtaposed with the jagged burred central buchi. Just like his celebrated tagli or cuts, these are marks that are inextricable from their production – they are as much recorded passages of action through time, as they are articulations of space. Their manual realisation is wholly bonded with their aesthetic and the pervading sense of sculptural confidence that they imbue confirms this as the work of an artist at the height of his powers.

Although we are impressed with Fontana’s bravura style, the mood of aggression is still inescapable in this Concetto Spaziale. Established in the torturous scratches and grooves, heightened by the punched staccato hole, and compounded in the morbid black of the oil paint, the sense of pain is inescapable in this work. According to Fontana, this effect was completely intentional, the enigmatic perimeters in this series represented "the path of man in space, his dismay and horror of going astray" while the holes were "the subsequent gesture of an anxiety that had grown unbearable" (Lucio Fontana quoted in: Barbara Hess, Lucio Fontana, 1899-1968: A New Fact In Sculpture, Cologne 2006, p. 68). This cosmic mood is recapitulated in the rare use of a black background, which lends the work a sense of the infinite – a glossy natural contrast for the gouges of the artist.

By appropriating oils as his medium for this series, Fontana brought his work into the direct tradition of the Italian Renaissance and Baroque painters, the pioneers of linear perspective and devoted expedients of foreground-middleground-background. By then puncturing the canvas, and scratching into the oil paint, Fontana eschewed that visual construct, and forced the viewer to consider his work on a gestural level. He smashed the window they had become so accustomed to looking through and demanded that his work be received in its own arena. In his own words, “at a time when people were talking about ‘planes’…making a hole was a radical gesture which broke the space of the canvas as if to say: after this we are free to do what we like” (Lucio Fontana in conversation with Daniele Palazzoli, Bit, No. 5, October-November 1967, n.p.).
Concetto Spaziale is utterly idiosyncratic of Fontana: the experienced viewer will recognise and appreciate his gestural articulation of space, his desecration of the traditional picture plane, and the brutality of his imagery in this fine example. However, in his appropriation of oil paint and in the use of the punctured hole, we might also observe the beginnings of a masterful late style. In these traits we can observe the precedents for the celebrated Venezia and Fine di Dio series, and it is these traits which make this such an exciting work. This is a nuanced piece characterised by the balance of Fontana’s composition and brought to life by the power of his convictions.