'Ming: The Golden Empire' opens at National Museum of Scotland in Edinburgh

'Ming: The Golden Empire' opens at National Museum of Scotland in Edinburgh Ming: The Golden Empire at National Museum of Scotland in Edinburgh

EDINBURGH.- The extraordinary story of the Ming dynasty (1368-1644), a period marked by a social, cultural and economic transformation and a dramatic flourishing of the arts, will be told in a major exhibition showing at the National Museum of Scotland this summer, Ming: The Golden Empire.

A collection of original Ming artefacts from Nanjing Museum, including Chinese National Treasures, will be on display in the only UK showing of this internationally significant exhibition. Nanjing was the birthplace of the Ming dynasty, its first capital before the creation of the Beijing palace complex or ‘Forbidden City’. A selection of rare and beautiful Ming objects from National Museums Scotland’s own Chinese collections will also feature within the exhibition.

Ming: The Golden Empire will introduce the remarkable achievements of this dynasty. The Ming – meaning brilliant or bright – was a period of important social transformation that resulted in a thriving and complex consumer culture, and was in many ways the starting point of modern China.

For 276 years, 16 emperors of the Zhu family, beginning with Zhu Yuanzhang, the first Ming emperor, reigned over the world’s largest, wealthiest and most populated empire. Through a remarkable assembly of treasures, the exhibition examines imperial power, the Ming elite, the development of new wealth, and international trading relationships as they developed over the period. It also sheds light on developing tastes and aesthetics, as Chinese society changed.

Dr Kevin McLoughlin, Principal Curator, Central and East Asia at National Museums Scotland, said; “Until it fell in 1644, the Ming was the world’s largest, wealthiest, most cultured, and most populous empire. It was a period of incredible cultural achievement, during which some of the most outstanding artworks in Chinese culture were produced. In many ways, the Ming also represents the starting point of modern China. We are thrilled to collaborate with the Nanjing Museum, one of the oldest and most prestigious museums in China, to bring this exhibition to the UK for the first and only time, and to introduce our visitors to this glorious period in Chinese history.”

The Ming imperial court commanded the very finest materials and workmanship. This is revealed by the exquisite imperial items and rare objects within the exhibition, including the iconic blue and white porcelain with which the Ming period is synonymous. It was far superior to anything that could be produced in Europe at that time. The rich selection of porcelain of different glazes and decorations on display makes clear that blue and white was actually one among many decorative treatments of Ming porcelain. A meiping (plum vase) jar from the Zhengtong emperor's reign (1435-1449) features a copper red underglaze, a colour effect so difficult to achieve that it was considered especially suitable for elite use. Workshops overseen by imperial eunuchs provided the court with all it needed for ritual, recreation and decoration. Also on display are sumptuous silk textiles, gold and jades, and rare examples of elaborately enamelled cloisonné.

A richly coloured painting from the early Ming illustrates the symbolic grandeur and geometrical order of Beijing’s newly-built Forbidden City. It was to be the imperial seat for emperors and their households for the following five centuries, and was the world’s largest palace complex.

At the top of the late Ming social order were the Ming’s educated elite, the literati, who had achieved success through the punishing civil service examination system. Exams were in principle, open to all, and therefore an important means of promoting social mobility. An extraordinary collection of life-like portraits show the faces of some of these men.

Accessories to the scholar’s studio, such as painting tables, musical instruments and delicately carved bamboo brushpots, depicting scenes such as pines and cranes, or scholars writing poetry, illustrate the literati ideal of self-cultivation. Many who failed to reach an official position pursued artistic and literary interests instead, and emerged to become the greatest painters, calligraphers, poets and writers of the Ming.

The exhibition not only examines the imperial court’s influence on Ming culture, but also looks at the influence literati taste came to have on Ming culture. Paintings on paper and silk, and calligraphy by leading Ming painters, such as the founder of the influential Wu school of painting, Shen Zhou (1427-1509), as well as painters and calligraphers such as Tang Ying (1470-1524), Qiu Ying (c.1494-1552), Wen Zhengming (1470-1559), and Dong Qichang (1555-1636) reveal the preoccupations of Ming society’s cultural elite. Wu school painting which typically featured monochrome ink landscapes inspired by poetry and painted with calligraphic brushstrokes became the standard for 16th century literati painting.

Society changed dramatically during the Ming, as a once agrarian economy transformed itself into a booming commercial economy. Rare examples of paper and metal currency illustrate this transformation, such as a rare banknote with the value of one thousand copper coins, from the Hongwu emperor's reign (1368-98).

Ming: The Golden Empire will show how an increasingly wealthy society led to greater demand for luxury and craft objects, including blue and white decorated porcelain. Using skills and techniques developed for the imperial court, the kilns of Jingdezhen began producing more porcelains to meet the demands of a growing domestic market that sought to emulate the tastes of the literati. Greater discrimination about the quality of goods meant that skilled craftsmen began signing their works just as literati painters did, becoming, in effect, brands.

Visitors will also discover exquisite luxury objects in a variety of precious materials, such as gold earrings, and a flawlessly executed late 15th century adornment of a gold cicada on a jade leaf, excavated from a family tomb in Jiangsu province in 1954. The object serves as a rebus: in Classical Chinese the phrase Jinchan Yuye (golden cicada on a jade leaf) sounds like a compliment to a woman for her unsurpassed beauty.

The exhibition also explores the changing roles of women in Ming society. While the painful practice of foot binding became more prevalent, courtesan culture, greater access to books, and an increasingly commercialised economy meant more prominent roles for women in the economy and culture of the Ming. Illustrating this in the exhibition are embroideries by the women of the famous Gu family. Remarkable examples of Gu family embroidery reveal the Gu family’s sophisticated needlework and skilled use of silk thread to imitate literati painting.

European influences began to impact on the Ming from the early 16th century, as a succession of Portuguese, Spanish and then Dutch merchant-adventurers arrived on Ming shores. A small number of highly educated Jesuits mastered the Chinese language and served at the imperial court as painters, book translators, astronomers and scientists. The most extraordinary of these men was the Italian, Matteo Ricci (1552-1610), the first European to visit the Forbidden City. Ricci arrived in China in 1583 and was appointed an advisor to the imperial court in 1601. His detailed map of the world in the early 17th century features in the exhibition, combining European cartographic techniques with Chinese text.

Important items from National Museums Scotland’s own collections complement treasures from the Nanjing Museum. Exceptional pieces of lacquer, porcelain and furniture will be displayed, alongside an incredibly rare imperial fish vat with a design of two imperial dragons chasing a flaming pearl.

Ming: The Golden Empire is supported by investment managers Baillie Gifford. Sarah Whitley, Partner, said: “The magnificence of the Ming dynasty will make this a very special summer at the National Museum of Scotland and Baillie Gifford is delighted to be supporting its presence in Scotland.” 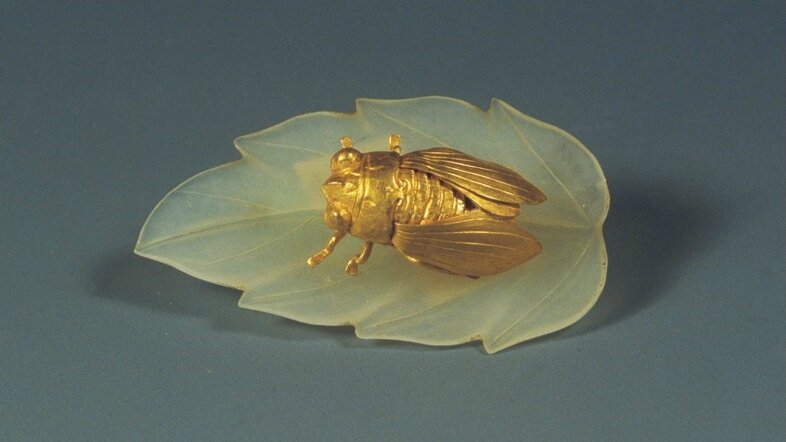 This exquisitely crafted piece of sculpture was discovered in a tomb in 1954: it is the top of a hairpin, belonging to a woman of extremely high rank. The imagery of a cicada on a leaf had a double meaning and was a high compliment paid to beautiful women This richly-coloured painting from the early Ming illustrates the symbolic grandeur and geometrical order of Beijing's newly-built Forbidden City. In 1420, Beijing’s Forbidden City became home to the Ming emperors and imperial family. This hanging scroll shows the formal layout of the complex arranged on a north-south axis. It was to be the imperial seat for emperors and their households for the following five centuries, and was the world's largest palace complex. The Forbidden City's chief architect, Kuai Xiang, is actually painted on - he stands in front of the Gate of Heavenly Peace.

Ricci arrived in China in 1583 and was appointed an advisor to the imperial court in 1601. This detailed map of the world in the early 17th century combines European cartographic techniques with Chinese text. This remarkable scroll showing a woman playing a flute - a Chinese National Treasure - was created by Tang Yin, one of the four Masters of Ming painting. Red underglaze vase with lid, from the tomb of Princess Ancheng (1384–1443), daughter of the Yongle Emperor. It is extremely rare for such a vase to survive with its lid. Porcelain with underglaze blue floral decoration. Produced at Official Kilns at Jingdezhen, this vase features a design of peonies and flowers. Blue and white decorated ceramic vase, from the late Ming period. The vase is decorated with the familiar pattern of the pine, bamboo and plum blossom, known as the 'Three Friends of the Cold Season'. These symbolise longevity, perseverance and resilience. White glazed porcelain jar with lotus-shaped lid, from the Hongwu Reign (1368–98) of the early Ming period. This silk brocade features two Mang dragons, distinguished by their four-talon claws. Robes made from this brocade might have been worn by empresses, imperial concubines or members of the Ming nobility. 'Wuyi (Nanjing) at Dusk'. Embroidery by the esteemed Gu family. The technique of decorating copper vessels with coloured enamel is widely known as cloisonné. This gilded copper enamel vase is decorated with a pattern of lotus flowers: the form echoes the Islamic origins of the first enamelled vessels to reach China