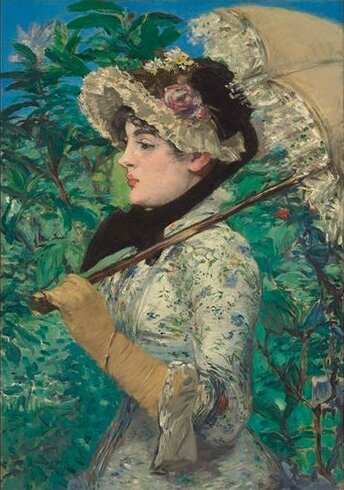 NEW YORK, NY.- Christie’s announced the sale of acclaimed Le Printemps by Edouard Manet as a highlight of the Fall auction season. It will be included in the Evening Sale of Impressionist and Modern Art on Wednesday, 5 November with a $25-35 million estimate. This masterwork comes completely fresh to the market, having remained in the same collection for over a century and been on loan for the last two decades at the National Gallery of Art in Washington D.C. The proceeds from the sale of Le Printemps will benefit a private American foundation supporting environmental, public health and other charitable causes.

Brooke Lampley, Head of Impressionist and Modern Art comments, “On the heels of the fantastic traveling exhibition Impressionism, Fashion and Modernity, of which works by Manet were a keystone, we are delighted to have been entrusted with the sale of Le Printemps. This painting is by the first artist of the modern era, encapsulating all major themes of the early modern period, from nature and femininity to society and fashion. One of his best known and most widely reproduced works, Le Printemps exemplifies the revolutionary style that Manet embraced.”

From the mid-1860s, Manet had established his reputation as the leading master of portraiture among the practitioners of “New Painting,” radically transforming its scope to embrace a dialogue between the traditional canon of art history and contemporary Belle Époque Paris. Actress Jeanne Demarsy is cast as an allegory of spring, a theme artists embraced since antiquity, yet executed in the artist’s ground-breaking painterly style and in a vanguard setting.

With an eye to Goya and early Renaissance portraits of young noblewomen, Manet posed Jeanne in profile. He evoked the arrival of spring in his treatment of Jeanne’s specially designed flowered dress, her lacy parasol, her bonnet regaled with blossoms, and the profuse verdant foliage of rhododendrons he painted behind her. Of the four seasons, Manet completed only Le Printemps and L’Automne, Musée des Beaux-Arts of Nancy.

Adrien Meyer, International Director, comments, "In this breathtaking painting Manet depicts a coquettish but self- assured Jeanne Demarsy as Spring. His distinguished use of black anchors the painting and emphasizes Jeanne's fragility. Manet projects in this masterpiece an idea of the modern woman, feminine and free, attracting yet deflecting the gaze of the viewer. Le Printemps is one of the last museum-quality works by Manet to come to auction. When again will the market offer a picture that truly made Impressionist history?”

Le Printemps was exhibited at the Paris Salon of 1882, along with Un bar aux Folies-Bergère – the supreme masterpiece of Manet’s oeuvre. Previously, the official Salon system in France had thwarted Manet’s hopes and plans for public success, recognition, and acceptance throughout his career. The submission of these two paintings, however, only a year before the artist’s premature death, would prove triumphant and potentially redefine Manet’s legacy. The works were enthusiastically received and led to a wide-spread call for reproduced images of both.

Manet’s friend, the journalist Antonin Proust, who had suggested the theme of the four seasons to him, was the painting’s first owner in 1883. By 1902, the painting had entered the holdings of the important Impressionist collector J. B. Faure, the famed operatic baritone, who was an avid collector and great patron of Manet. The dealer Durand-Ruel acquired the painting from Faure in 1907 and shipped it to his New York gallery, from which it was purchased in 1909, having remained ever since in private hands.