A blue and white conical cup, Chongzhen period, circa 1640

A blue and white conical cup, Chongzhen period, circa 1640 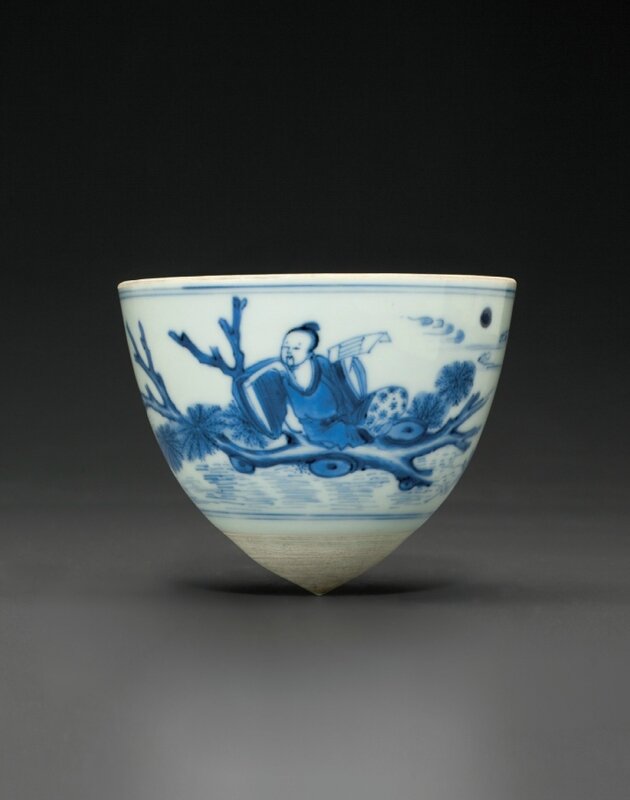 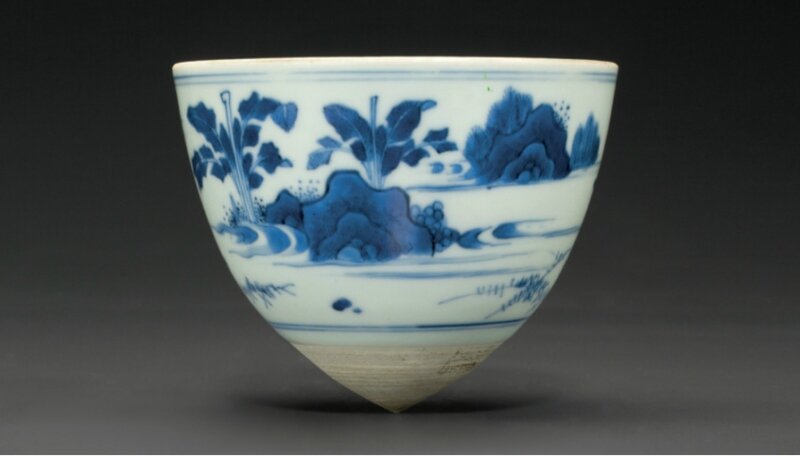 The cup is of rounded, conical form and is decorated on the exterior with a scene the Han statesman Zhang Qian reclining in a log raft in a moonlit river. The mouth rim and the pointed base of the cup are unglazed. 4 ¼ in. (10.8 cm.) diam. Lot 3529

Notes: Zhang Qian was a Han dynasty imperial envoy and traveler. He is more usually seen depicted on rhinoceros horn ‘log-raft’ cups and carvings of Kangxi date, such as the example sold at Christie’s Hong Kong, 30 May 2012, lot 4162. The rhinoceros horn cups are thought to have been inspired by earlier silver prototypes such as the one in the National Palace Museum, Taiwan, dated to the 14th century and another formerly in the collection of Sir Percival David and now in the Cleveland Museum of Art, dated to the Ming dynasty, probably 16th century. Both of these are illustrated by J. Chapman in The Art of Rhinoceros Horn Carving in China, London, 1999, p. 263, nos. 382 and 283, respectively. It is rare to find this subject as decoration on porcelain.

A rare small rolwagen decorated with this subject, from the Shanghai Museum, is illustrated by Sir Michael Butler and Wang Qingzheng in Seventeenth Century Jingdezhen Porcelain from the Shanghai Museum and the Butler Collection: Beauty’s Enchantment, London, 2006,p. 141, no. 37, where it is noted that “Zhang Qian from the Western Han dynasty was famous for going to the Western region and promoting cultural and economic exchanges between the East and the West. Legend says that he had been to the headstream of the Yellow River, in order to regulate the water and to avoid future flooding”. By accident he found himself floating along the Milky Way (River of Heaven). From there he caught sight of the Weaving Main and the Cowherd, who were forced to be separated by the Milky Way and can only cross once a year on the 7th day of the 7th month, when a bridge is formed by magpies.

Another example decorated with this subject, a rare ovoid jar from the Transitional period, was sold at Christie’s New York, 24 March 2011, lot 1682.