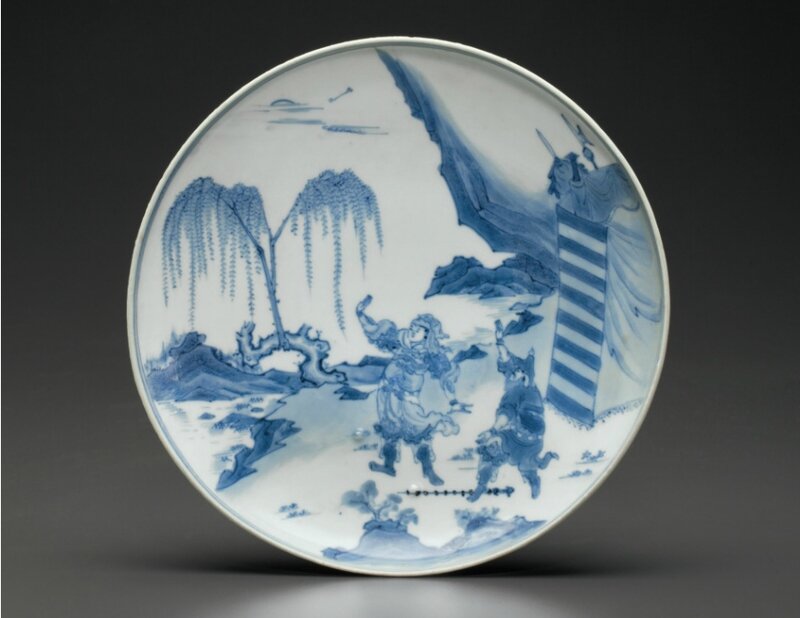 The shallow bowl is decorated in the interior with a scene of the Han Emperor Wen with Zhou Yafu at the Fine Willow Garrison, standing in front of a striped tent on a riverbank. Both figures gesture upwards toward something in the distance as clouds obscure the moon above. The base bears an apocryphal Xuande mark. 7 ¾ in. (19.7 cm.) diam. Lot 3525 Notes: This previously unidentified scene was most likely inspired by the drama Xi Liu Ying by the Yuan dramatist Zheng Guangzu. It depicts the Han Emperor Wen with Zhou Yafu. Zhou Yafu was the son of Zhou Bo, who had been Prime Minister to Emperor Wen (r. 179-156 BC). Zhou Ya fu served Wen's successor, Emperor Jing (r. 156-41 BC), under whose rule the king of Wu started the rebellion of Seven Kingdoms. Loyal to the Emperor, as his father had been, Zhou Yafu put down the rebellion. As well as his loyalty, Zhou Yafu is also known for his cunning in refusing to enter into battle with the rebels until the latter were weakened by hunger. For a further discussion of this scene see the introductory essay in this catalogue, p. 27.