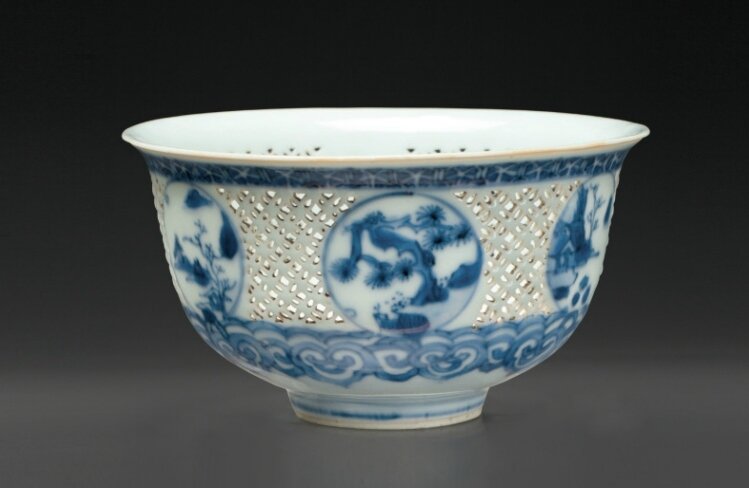 The deep bowl with slightly flaring rim is decorated on the exterior with four circular landscape panels set against a finely reticulated cash-diaper ground between cell and ruyi bands. The underside of the rim and the recessed base are unglazed. 4 3/8 in. (11.1 cm.) diam. Lot 3505

Notes: The technique of piercing the walls of a vessel to create a delicate openwork design was known by the Chinese as 'ling long’ or 'delicate openwork’. These openwork designs would have been cut by hand when the clay was 'leather hard'. Both the cutting and subsequent firing would have required great skill. Versions were also created where the carving extends only partially into the wall of the vessel (see lot 3517). In his note to a fully-pierced example very similar to the present lot, in the Rijksmuseum, Amsterdam, Christiaan Jörg indicates that such bowls were mentioned in VOC (Dutch East India Company) records of 1643-1646, but were also made in the Wanli period (see Christiaan J.A. Jörg, Chinese Ceramics in the Collection of the Rijksmuseum, Amsterdam: The Ming and Qing Dynasties, London, 1997, p. 82, no. 71).