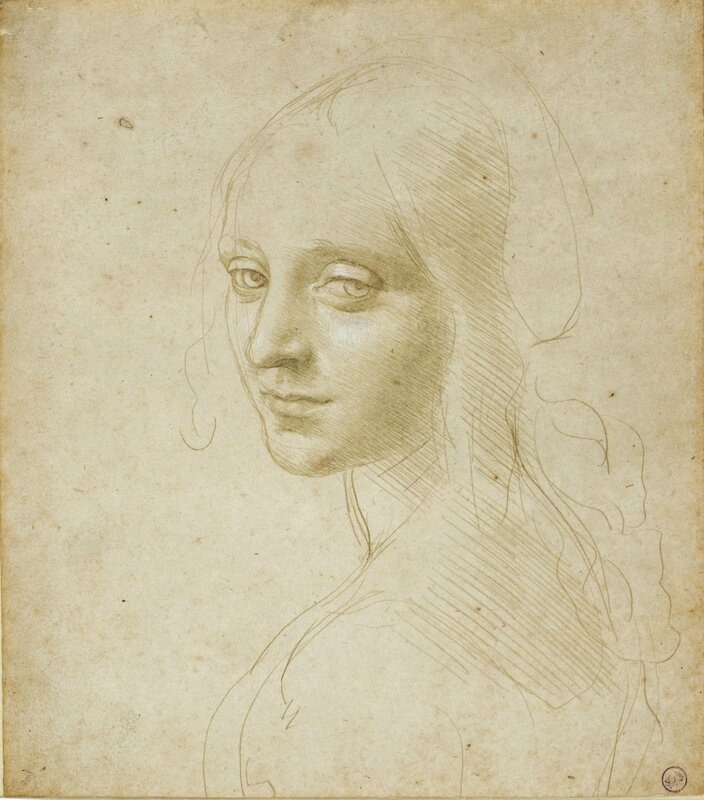 Leonardo da Vinci, Study for the Angel in the ‘Virgin of the Rocks’. Metalpoint heightened with white. Biblioteca Reale, Torino, Inv. 15572.

Williamsburg, Va. --The first exhibition devoted to Leonardo da Vinci’s fascination with the beautiful and the ugly take place at the Muscarelle Museum of Art at the College of William & Mary.

The show will open on February 21 and will remain on view through April 5, 2015. This exhibition is unprecedented, as it is the first-ever exhibit dedicated to the Renaissance genius’s philosophy of beauty as revealed in more than twenty of his original drawings.

These drawings, on loan from Uffizi museum in Florence and the Biblioteca Reale in Turin, Italy, will be contrasted with eight originals by Leonardo’s greatest rival, Michelangelo Buonarroti, lent from the Casa Buonarroti in Florence.

Of particular importance regarding Leonardo Da Vinci And The Idea Of Beauty:

• It will comprise more than 20 outstanding drawings by the Renaissance genius, including the precious sketches in the complete Leonardo book, Codex on the Flight of Birds.

• In the Codex, a newly discovered self-portrait of Leonardo at age 53 will be exhibited for the first time in the United States at the Muscarelle during this show.

• Visitors will be afforded a unique opportunity to explore the sources and influence of Leonardo’s philosophy of beauty as revealed in an unprecedented concentration of his drawings, lent from the Uffizi museum in Florence and the Biblioteca Reale in Turin, Italy, and as contrasted with eight original drawings by his greatest rival, Michelangelo Buonarroti, specially selected from the Casa Buonarroti in Florence.

• This show will be at only two venues in the United States. Organized by the Muscarelle Museum of Art, the exhibition was conceived in partnership with the Museum of Fine Arts, Boston that will be the second and only other venue for the exhibition. It will be on view in Boston from April 15 through June 14, 2015.

• Among the many drawings, the Study for the Head of an Angel for the Madonna of the Rocks, which Sir Kenneth Clark considered “one of the most beautiful drawings in the world,” will be a highlighted star.

“The Muscarelle has renewed its place in the national and international spotlight with the announcement of Leonardo da Vinci and the Idea of Beauty,” said Aaron De Groft, director and CEO of the Muscarelle Museum of Art. “This really is a once-in-a-lifetime opportunity because there is nowhere else in the world where one can go and see thirty drawings by the great Leonardo -- and to then be able to view contrasting drawings by Michelangelo with which to compare -- is simply impossible. On top of that to have a complete Codex on view and for the first time ever in the United States to see a recently discovered self portrait of Leonardo in red chalk at the age of 53 makes this experience incomparable.”

The theme of beauty was the abiding concern of the Italian Renaissance in both art and philosophy. Leonardo da Vinci was almost obsessed by the constant contrast between beautiful and ugly (bello e brutto) in the visual world. Unlike Michelangelo, who was an idealist, Leonardo found a hidden beauty even in the most unsightly of faces. In this sense, he foreshadowed the painter Caravaggio, who is known to have studied his texts. In Leonardo’s Treatise on Art, nature is constantly cited as the ultimate authority, a synonym almost, for ‘divine.’

Leonardo da Vinci recorded countless observations on nature, biology, geology, and physical science on manuscript pages that are now mostly lost. Of the roughly twenty codices (bound manuscripts) that have survived, his Codex on the Flight of Birds is considered one of the most influential. A complete codex, or early book, is so rare that less than 20 written by Leonardo remain in the world today. Leonardo da Vinci has long been credited with some of mankind’s earliest progress towards human aviation and he is often cited as an informational and inspirational source for the Wright brothers. Leonardo wrote more than 35,000 words and created more than 500 sketches dealing with flying machines, the nature of air, and bird flight. Perhaps the most notable of these musings, the “Codex on the Flight of Birds,” will be an integral part of this exhibition. Visitors will be able to flip through the entire codex electronically while viewing entries specifically chosen by the curator. The codex is rarely displayed outside of Italy.

A singular rarity regarding the Codex on the Flight of Birds will be the first time exhibited in the United States the newly discovered self-portrait of Leonardo at age 53. Hidden behind his characteristic right to left script, the red chalk selfportrait will be revealed in this exhibition and describes how Leonardo really saw his famously handsome features.