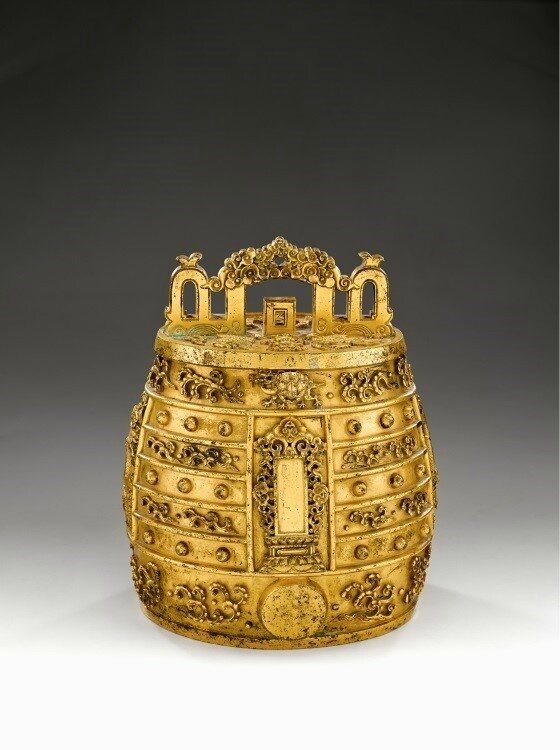 PHILADELPHIA, PA.- Freeman’s Asian Arts March 14 auction will offer an array of important and historic imperial works of art spanning several centuries that promises to attract the interest of serious collectors. The 652 lot sale will commence at 10am on March 14 in Philadelphia before the start of New York Asia Week.

One of the highlights from the auction is lot 65, a heavily cast gilt-bronze bell, estimated at $100,000-150,000. Also known as bianzhong, it was an exclusive and important part of imperial court rituals and ceremonies. In the Qing dynasty (1644-1911), bianzhong were commonly played during ceremonies at the Temple of Heaven and the Temple of Agriculture, as well as during imperial banquets and state rites. Bells of this type were usually assembled in graduate sets of sixteen, producing twelve different musical tones and four repeated tones of a lower octave. Their respective musical notes were determined by their thickness. As depicted in court paintings, bianzhong would have been suspended in two tiers of eight over tall and elaborate wooden frames. A number of these bells were reputed to have left China during the late 19th and early 20th century. Many of these bells, particularly from the Kangxi and Qianlong periods, have resurfaced at auction over the past few decades. This particular bell was brought back to the United States by Lt. Peter Bartsch, who was a part of the China Relief Expedition in 1900. Lt. Bartsch passed away in 1928, and the bell has since been passed down through family. Another item of particulate note is lot 402, an incised white glazed porcelain bowl, estimated at $10,000-15,000. Emperor Yongle (1403-1424) of the Ming dynasty, commenced his reign in the southern capital of China, Nanjing and ended it in Beijing. During his rule, he initiated one of the most active and important periods of China’s porcelain production. Due to the move of the capital in the middle of Yongle’s reign, imperial porcelain workshops at Jingdezhen in Jiangxi province increased quantity and quality of their rapid porcelain productions. During this time, wide ranges of glaze colors and porcelain forms were invented, many of which remained as favorites for emperors after as well as modern Chinese porcelain enthusiasts. White glaze porcelains were particularly well done and well-liked by the Ming court, and they were commonly used for Buddhist rituals. As Daisy Lion-Goldschmidt explained in Ming Porcelain, the white monochrome glazes were “glories of the period” and “The technical perfection is unsurpassed, with a body so pure and fine.” This particular bowl has the typical form of a Ming lotus bowl and is incised by hand to the interior with five peony medallions, which were common motifs in the Yongle period as well as the 50 years to follow. The interior bottom of the bowl exposes a unique concavity under an incised peony medallion, which is a rare seen feature. The white glaze on this bowl reveals a slight hint of celadon to the edge of the foot and is unglazed to base, setting it apart from any other example found in museums or sold at auctions for the past few decades. This white-glazed porcelain bowl is part of a pre-Qing porcelain ware collection from a Philadelphia Main Line lady. The collection, lots 401-411, was purchased in China during the 1940s. An imperial jade book, given to the Grand Empress Dowager Xiaozhuang as a dedication by her grandson Emperor Kangxi, estimate $100,000-150,000. Photo Freeman's.

Born in 1613, she was a descendent of the younger brother of Genghis Khan and he married into the Jurchen clan of Aisin-Gioro to stabilize the political alliances between her Mongol family and the Jurchen house that was rising in power. Her husband, Hong Taiji, was the fourth prince of Nurhaci, the most powerful Jurchen chief at the time. The Jurchen lived nomadic lives, similar to the Mongols, in Northeastern China (known as Manchuria) until Nurhaci united all the Jurchen clans into military social units called Banners and ascended the throne of what is known as the Later Jin Dynasty. Hong Taiji succeeded to the throne 1626 and began leading the Banners into conquest of what today is mainland China. Facing the corrupted and weak Ming government, Hong Taiji and his brothers broke through defenses easily. In 1635, he renamed the Later Jin Dynasty as Qing, or the Manchurian Dynasty, to avoid the Han people’s hostile associations with the conquest of the Jin Dynasty in 1125.

When Hong Taiji died in 1643, Bumbutai and Taiji’s son, Fulin, succeeded as the Emperor Shunzhi. For almost twenty years, Bumbutai, now Empress Dowager Xiaozhuang, kept a low profile at court. In 1661 Emperor Shunzhi suffered a sudden and mysterious death and left the newly formed Qing Empire in the hands of his 8-year-old son, Aisin-Gioro Xuanye, later known as the great Emperor Kangxi. Bumbutai, then the Grand Empress Dowager, took charge of the upbringing of the child emperor and counseled him to learn from the Four Regents, who were appointed during Emperor Shunzhi’s time. Emperor Kangxi greatly valued his grandmother, Grand Empress Dowager Xiaozhuang, who assisted him in his personal growth, as well as his rise to political power. Some historians claimed that she was the mastermind behind many of his early successes, such as defeating the power seizing regent, Gulwagiya Oboi.

On November 17 of the Lunar Year of Dingwei—December 31, 1667 in the Western calendar—Emperor Kangxi dedicated his grandmother for the third time, giving her the laudatory title of the “Luminous, Wise, Kind, Long-life, Polite, Simple, Peaceful, Admirable, Elegant, Auspicious, Honest, Gracious, Gentle, Dignified, Tranquil, and Harmonious Empress Dowager.” According to court regulation, the dedication was scripted into the imperial records and a book made out of jade, containing these words, was then given to the Grand Empress Dowager. The book’s jade exuded a vibrant color of greyish olive-green, intertwined with white and russet streaks, and came from Hetian— otherwise known as Khotan— a city in the Uyghur region renowned for the production and export of nephrite jade to China since ancient times.

Because of the destruction of wars, very few imperial jade books from the Qing palaces survived. Although Grand Empress Dowager Xiaozhuang was dedicated two more times before her death in 1688 by the Emperor Kangxi and three more times in the next forty-seven years, only this third dedication book has been found. What remains today are six panels of this important and rare book, containing all the Manchurian texts of Emperor Kangxi’s third dedication to his grandmother in 1667.

The book in its original form would have also included two cover panels, as well as two Han Chinese translation panels. It was in possession of a Singaporean collector in the early twentieth-century and was then translated to Mandarin Chinese, as well as English, in 1954 by Lee Seow Mong and C.M. Wong, who were Senior Chief Translators for the Imperial Court of Singapore. It then passed down through the collector’s family until today. It is possibly the most important physical evidence that recorded the legacy of a woman whose life directly affected the success of one of China’s most powerful empires.

In addition to the Asian Arts auction, Freeman’s will exhibit “Myanmar Art Out of the Box” March 7-13, a historically relevant collection of art by the leading contemporary artists of Myanmar, on view and for sale, for the first time in the United States. Organized by Anita Heriot, President of Pall Mall Art Advisors and Paula Tin Nyo, Founder & CEO of Yone Arts, “Myanmar Art Out of the Box” focuses on the artistic expression of Myanmar during the military regime years of isolation and censorship and offers the global collector the unique proposition of collecting art from the hottest emerging market in Asia and arguably the world. The exhibition will showcase a diverse group of talented artists and their work that represents the thriving contemporary art scene of Myanmar. They include Khin Zaw Latt, Htein Lin, Aung Ko, Brang Li, Kaung Su, Mor Mor, Nay Yay Than, Ohn Ohn, Sandar Khine, Min Zaw, Nge Lay, Zay Yar Aye and Soe Naing.