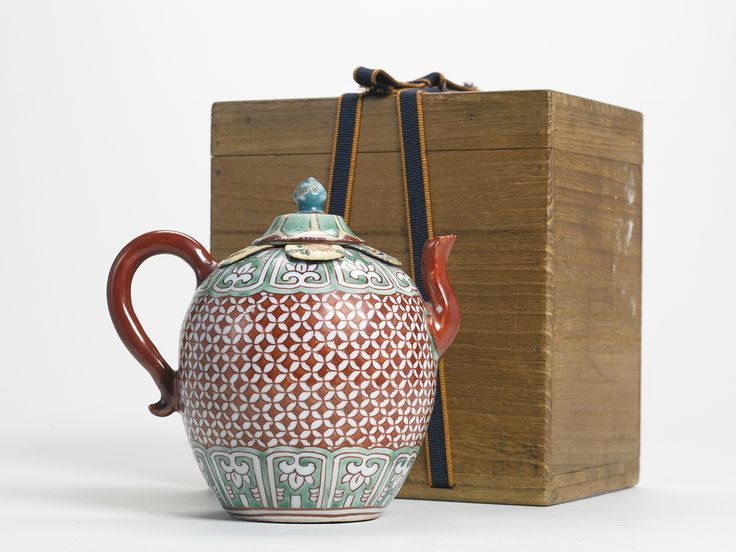 the ovoid body set with a faceted spout to one side and an arched looped handle to the other, surmounted by a fitted domed cover of lotus-leaf form with a bud knop, painted in overglaze iron-red, green, yellow and turquoise enamels, a wide iron- red cash-diaper around the center between two green-ground rows of lappets each enclosing a lotus, Japanese wood box. Height 5 3/4  in,. 14.6 cm

Notes: The form and decoration of the present teapot and cover are extremely rare and most likely commissioned specifically for export. Red and green enameled wares without underglaze blue first appeared in the Jiajing period. The present teapot includes the use of turquoise and yellow on the naturalistic leaf-form cover. The palette was produced by privately operated kilns at Jingdezhen with slightly lesser quality wares of Swatow-type produced in Southern China, Fujian province, and proved popular for export particularly to Japan. The elongated ovoid form ewer with fitted, domed cover was produced at the end of the Ming dynasty with known examples in underglaze blue and white. For an example of the form see a rounded pot of similar height recovered from the Hatcher shipwreck, dating to about 1643, illustrated in Jessica Harrison-Hall, Ming Ceramics in the British Museum, London, 2001, p.360, no. 12:17.  The cash-diaper motif appears frequently on reticulated wares of the early 17th century.