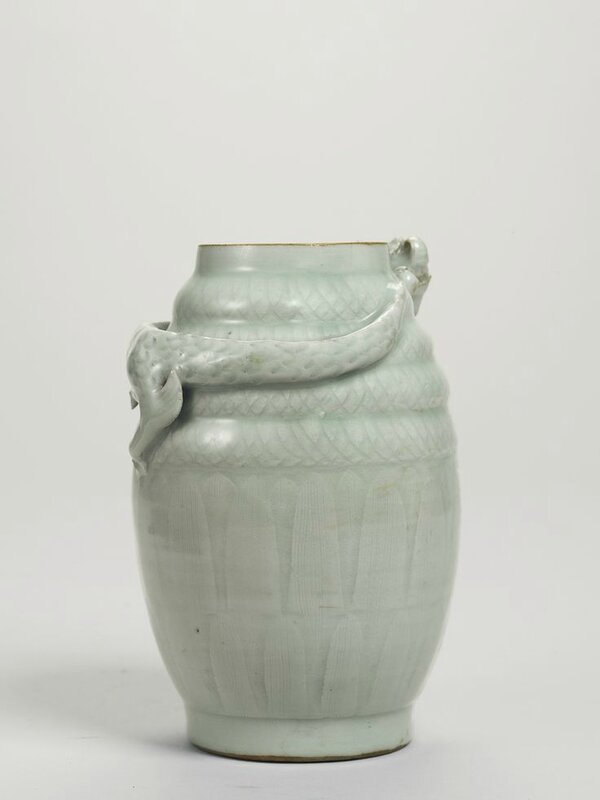 the elongated ovoid body rising to a rounded shoulder comprised of four tapering ridges and a short cylindrical neck with everted rim, carved around the body with two rows of overlapping stiff lotus leaves, the shoulder with further bands of petals and coiled around the shoulder with a large dragon modeled in high relief, the horned head with jaws open and grasping for a 'flaming pearl, the body impressed with scales and ridged back, covered overall with a soft bluish-green glaze, the footring and rim left unglazed and burnt orange in the firing, Japanese wood box.

Note: It is thought that funerary jars of this type were made in pairs, one bearing the 'Green Dragon' of the East and the other the 'White Tiger' of the West. A pair from the Percival David Foundation, London, is published in Margaret Medley, Illustrated Catalogue of Celadon Wares, London, 1977, pl. IV, no. 36, where Medley notes that these jars may have been filled with aromatic oils.

A related jar to the present example with its cover from the Avery Brundage collection in the Asian Art Museum of San Francisco is illustrated in He Li, Chinese Ceramics, London, 1996, no. 281; another jar with similar ridges and coiled dragon in The Metropolitan Museum of Art is illustrated in Suzanne G. Valenstein,  A Handbook of Chinese Ceramics, New York, 1989, p. 105, no. 99. Compare also a jar and cover in the Indianapolis Museum of Art included in the exhibition Beauty and Tranquility: the Eli Lilly Collection of Chinese Art, Indianapolis Museum of Art, Indianapolis, 1983, pl. 78. Many similar jars have been sold at auction one fairly recently in our London rooms, 14th May 2008, lot 312.