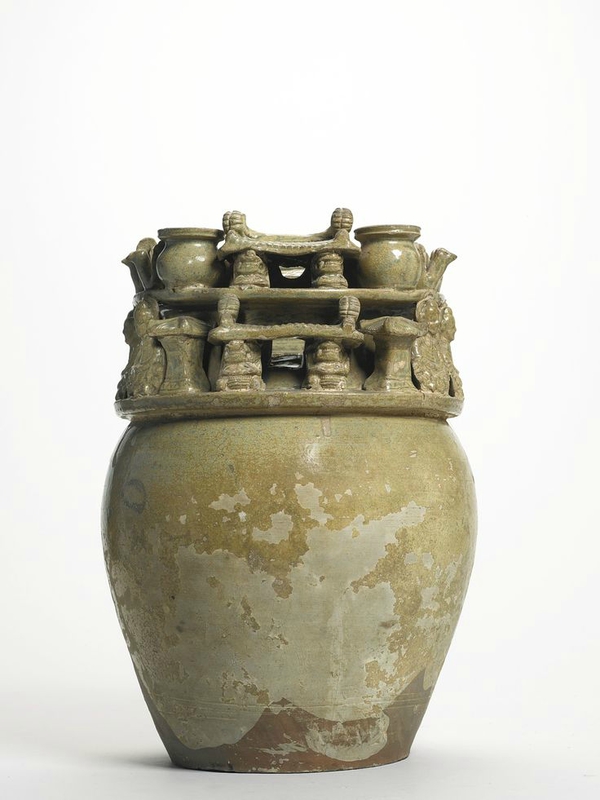 the plain ovoid jar surmounted by a two-tiered structure of molded, carved and applied decoration, the first section comprised of two prominent gateways with bear-form supports, each flanked by a pair of tall pillars,que, and eight seated Buddhas atop lotus thrones, the upper section with another similar pair of gateways but set with oviform jars to either side and birds with outspread wings, Japanese wood box. Height 14 3/4  in., 37.5 cm

Notes: The most striking type of Yue ware is the large funerary jar, known as hunping  (vessel of the hunsoul), gucangguan (granary jar), or shenting hu (spirit pavilion vase). These jars typically have complex sculptural assemblages that decorate the upper portions juxtaposing the plainer lower portions. A variety of techniques were utilized in the decoration of these jars; sprig molding, applique, carving and incising. These jars are generally thought to come from the area south of the Yangzi River corresponding to modern northern Zhejiang and Jiangsu provinces.

The present example is notable for the inclusion of Buddhist figures. Typically the jars feature musicians and entertainers in attendance to ease the passage to the next realm. The seated Buddhas are among the earliest representations of Buddhism in China indicating that the religion which had traveled from India via established trade routes in the Han dynasty, had gained a strong level of popularity by the 3rd century. A similar example is illustrated and discussed in Regina Krahl, Chinese Ceramics from the Meiyintang Collection, London, vol. 3 (II), 2006, no. 1337.