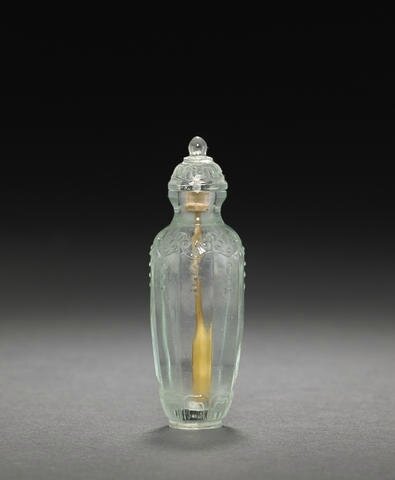 The slender, slightly tapering bottle rising to a waisted neck beneath an everted convex lip, the sides designed with eight evenly spaced vertical lobes, framed between bands of raised lingzhi heads at shoulder each above a fringe of simulated jewels, and stylized lappet petals surrounding the circular foot ring. 2 3/16in (5.5cm) high

Notes: A group of similarly executed bottles connected with the Beijing Palace Workshops, often seen in glass and chalcedony, has been thoroughly discussed in a number of sources. The characteristic features of the group are the tapering cylindrical form with vertically lobed sides, some inscribed although not with the present example, and the peculiar decorations including fringed lingzhi bands and lappet petals. A very closely related glass snuff bottle, almost identical to the present example, is illustrated and discussed in The Art of the Chinese Snuff Bottle, Moss, Grahand and Tsang, Weatherhill, New York, Vol. II, p. 585, no. 350. According to the above, the bottle is one of the more unusual examples of the group in terms of that it might have been carved from a solid block of glass rather than blown. Other aquamarine glass bottles of similar design are sold by Sotheby's, Hong Kong, 17 November 1973, lot 321; and Sotheby's, London, 7 October 1975, lot 64. Compare also to a chalcedony bottle illustrated in the exhibition catalog Chinese Snuff Bottles: a Miniature Art from the collection of George and Mary Bloch, the Urban Council, Hong Kong, 1994, p. 275, no. 216.