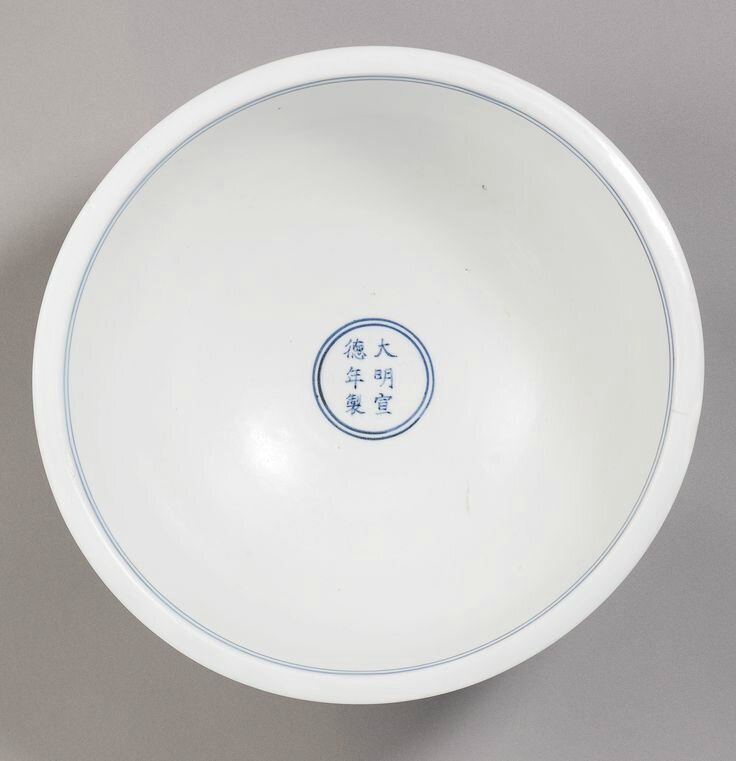 the deep rounded sides stoutly potted and well-painted in intense and varying tones of cobalt blue on the exterior with two spiritedly drawn five-clawed striding dragons in mutual pursuit amidst scattered clouds wisps, all between a border of upright lotus petal lappets and a band of cresting waves, the interior with a double lines around the rim and a six-character mark in underglaze blue within a double circle at the base.

Notes: The Yongle (1403-24) and Xuande (1426-35) reigns were perhaps the greatest periods of China’s porcelain manufacture and certainly the best time for blue-and-white. The common quality and yet diverging emphasis of the imperial production in these two reigns could hardly be better illustrated than by the two exceptional pieces included in this catalogue, the Mahin Banu Grape Dish of the Yongle period, lot 264, and the present Xuande 'Dragon' bowl. It was the Yongle Emperor who initiated an unprecedented command of the court over a ceramic manufactory by giving the imperial administration in Beijing, high up in the north, complete control over the kilns at Zhushan in Jingdezhen, Jiangxi province, south of the Yangzi River. Refinement of body and glaze materials seem to have been stipulated, high-grade cobalt provisioned, acceptable standards of workmanship and firing increased, forms and patterns pre-designed, and the output of both A-grade items and seconds requisitioned by the court, in order to distribute the former through official channels and destroy and bury the latter.

This strict supervision of Jingdezhen porcelain continued through the Xuande reign, but not beyond, as the manufacture of imperial porcelains was low on the imperial agenda in the three short reigns of the following ‘interregnum’, a period of political instability. When the court took up its interest in fine table wares again in the Chenghua period (1465-87), materials, shapes and styles had changed.

But whereas the Yongle Emperor appears to have used Jingdezhen’s blue-and-white porcelains predominantly for diplomatic purposes, for trade, and as imperial gifts rather than to furnish his palaces, the Xuande Emperor began to appropriate them as emblems of his imperial power. Thus, unlike many Yongle pieces that found their way into foreign lands, sent there on the Emperor’s orders, most Xuande pieces where retained in the palace and many are still remaining in the imperial collection today, either in the Palace Museum, Beijing, or the National Palace Museum, Taipei. Generally, they were inscribed with the imperial reign mark and thus display their imperial descent in eternity, a marking that was used extremely rarely in the Yongle reign. And although many forms and designs continued to be made almost identically over both periods, there is a clear domination of large sizes and motifs suitable for export in the Yongle era, whereas in the Xuande reign the dragon, as well as the phoenix, as symbols of imperial authority, became very prominent. Compared to the Yuan dynasty (1279-1368), where dragons were also a popular motif of porcelain, the imperial animals of the Xuande period were depicted as less fierce and more majestic, with their mouth closed, their powerful body evenly built and their legs showing five claws. The dragons on the present bowl are prime examples of the Xuande species, a type that became the classic dragon image of China.

The present bowl, of which there are fewer than twenty known examples, is an iconic representative of one of the most famous eras of porcelain production. Because of its distinctively robust form, this type of bowl has traditionally been referred to by Western scholars and collectors as a ‘dice’ bowl; assuming that the dense walls were made to endure the inevitable wear and tear of flying dice. Throwing six dice in a bowl during the Moon Festival remains indeed a popular tradition. However, Chinese reference sources propose a different usage and describe this particular form as bo, a term associated with Buddhist alms bowls. For instance, the example in the Palace Museum (pl. 124 cited below) is accompanied by a note discussing the specific use of the word bo and relating it to the devote Buddhist practice of the Xuande emperor and his court.

Although associated with Buddhism, these outstanding bowls bear the quintessential imperial emblems of five-clawed dragons and a prominently positioned six-character reign mark on the base of the interior. Dragons are frequently featured on Xuande imperial ware; obviously a deliberate choice and one that left no doubt as to the singular authority of the emperor. On the present example, the powerful mythical beasts are remarkably well drawn; the finer details such as scales, claws and waves are executed with a masterful precision that is cleverly juxtaposed by dynamic poses and playful expressions. The intense, rich blue derives from the use of the higher quality cobalt, imported to the East from Islamic regions, its high iron content causing separation during firing and giving rise to the famous ‘heaping and piling’ effect. The harmonious composition is further strengthened by the perfectly proportioned use of positive and negative space. The evident technical skill speaks to the high standards expected from the imperial kiln workers of the Xuande era. An accomplished artist himself, the Xuande emperor was an active patron of the arts.  His close interest in porcelain wares inspired numerous commissions during his brief ten year reign; a fact borne out by the variety, innovation, success and quantity of remaining imperial wares and the large number of shards from smashed inferior examples that have been excavated at Zhushan in Jingdezhen, the site of the Xuande imperial kilns.

Blue and white dragon bowls of this thickly potted type and of Xuande mark and period are in the Palace Museum, Beijing, illustrated in The Complete Collection of Treasures of the Palace Museum: Blue and White Porcelain with Underglazed Red (I), Shanghai, 2000, pl. 124; in the National Palace Museum, Taipei, included in the Special Exhibition of Selected Hsuan-te Imperial Porcelains of the Ming Dynasty, National Palace Museum, Taipei, 1998, cat.no. 37; in the Nanjing Museum, illustrated in Xu Huping, Treasures of the Nanjing Museum, Hong Kong, 2001, no. 45; in the Victoria and Albert Museum, London, illustrated in John Ayers, Far Eastern Ceramics in the Victoria and Albert Museum, London, 1980, pl. 148; and from the Sir Percival David Collection at the British Museum, London, and in the Freer Gallery of Art, Washington D.C., published in Oriental Ceramics. The World's Great Collections, vol. 7, Tokyo, 1976, monochrome pl. 97, and vol. 10, Tokyo, 1976, monochrome pl. 104, respectively. Additionally, a similar fragmentary bowl was excavated at the imperial kiln site of Zhushan in 1983 and in the exhibition Xuande Imperial Porcelain Excavated at Jingdezhen, Chang Foundation Taiwan, 1998, cat. no. 16.1, col. pl. 25 and p. 199.