Continental, English & Middle Eastern books and manuscripts to be offered at Bloomsbury Auctions

Continental, English & Middle Eastern books and manuscripts to be offered at Bloomsbury Auctions LONDON.- Bloomsbury Auctions present their sale of Continental, English & Middle Eastern Books & Manuscripts on Thursday 19th March in London at their saleroom in Mayfair. The sale charts the development of printing on the continent and in England, with works dating from the 1470s up until the 18th century.

Particularly in vogue after the release of Oscar-winning film The Imitation Game, is a 17th century work on codes and secret writing; Cryptomenytices et Cryptographiae libri IX, first edition (1624), by Augustus II, Duke of Brunswick-Luneburg, written under the pseudonym, Gustav Selenus. The engraved title page of the work is believed to provide the first clue of Sir Francis Bacon’s supposed authorship of William Shakespeare’s plays. In one vignette it depicts Bacon handing a manuscript text to Shakespeare (a man holding a spear) and in another depicts Bacon writing on a folio-sized piece of paper, which hints at the first folio edition of the plays, published a year earlier in 1623 [estimate £2,000-3,000 Lot 129]. The fourth folio edition of the plays of 1685 is also offered here. It is the last edition to be printed in the 17th century [estimate £10,000-15,000 Lot 157]. 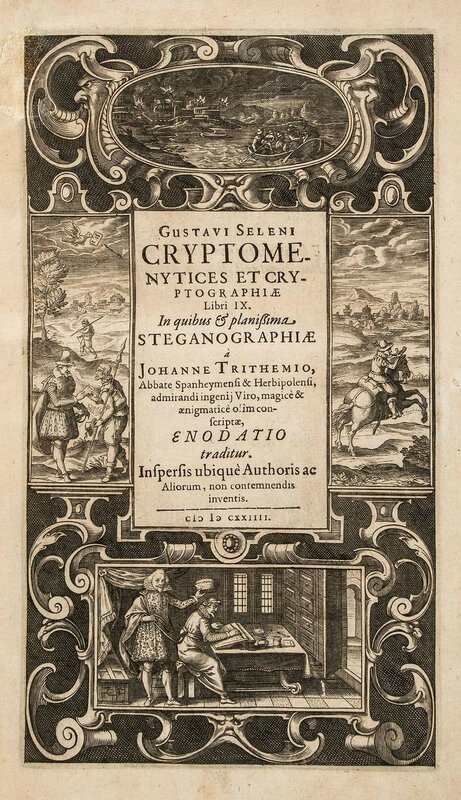 On codes and secret writing. Printed the year after the First Folio the engraved title is of particular interest. It purports to attribute the authorship of Shakespeare's plays to Sir Francis Bacon. One panel supposedly depicts Bacon handing a text to Shakespeare (a man holding a spear), while another supposedly depicts Augustus holding the Cap of Maintenance over the head of Bacon, who is writing on a folio-sized piece of paper. 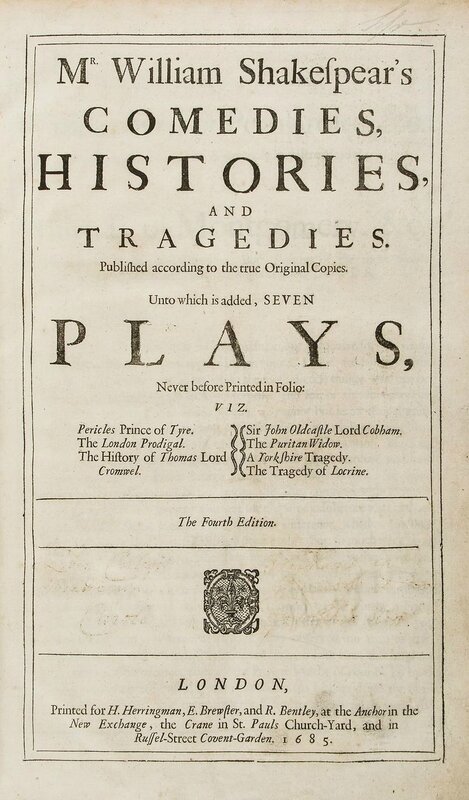 The last of the 17th century editions of Shakespeare's collected plays. It was printed on taller paper stock than the previous folio editions. Herringman and his co-publishers decided on a larger paper size in order to increase the number of lines per page, and so decrease the bulk of the book.However, including the added plays, the number of sheets in the Fourth Folio is almost exactly the same as that in the First and Second.

Regardless of Shakespeare’s true identity it is well documented that his works were inspired by the comedies of the Roman playwright, Titus Maccius Plautus. Leading an impressive opening group of 45 incunables from a private collection is Comoediae (1472) by Plautus.

This fine collection of incunabula charts the development of printing in Europe from 1471-1500. Collections of this size rarely appear at auction, and it is particularly unusual to see an editio princeps of Plautus’ Comoediae at auction. The last copy the auctioneer can trace was in 1961. This rare survivor is estimated to achieve £10,000-15,000 [Lot 4]. 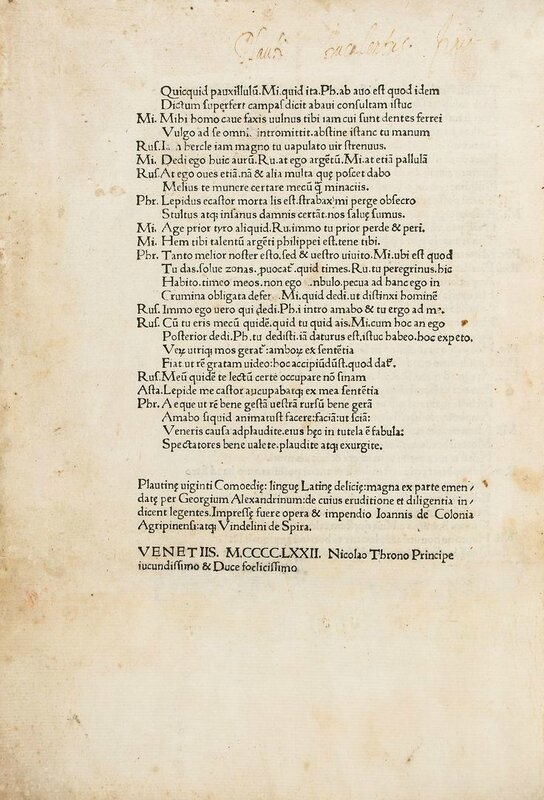 The editio princeps is rare at auction. The last copy we can trace was in 1961 (The Firmin-Didot - Crewe copy). The influence of the comedies of Plautus on the work of Shakespeare, Dryden and Molière (amongst others) is well documented.

Elsewhere in the sale is the first printing of the works of the mathematician Euclid, with an introduction by John Dee, alchemist, occult philosopher and advisor to Queen Elizabeth I; The Elements of Geometrie, (1570). John Dee’s preface is considered by many to be his most important published work. It outlines the practical applications of Euclid’s work, lays the foundations for later experimental science and hints at the use of magic and the supernatural in conjunction with the natural [estimate £20,000-30,000 Lot 115]. 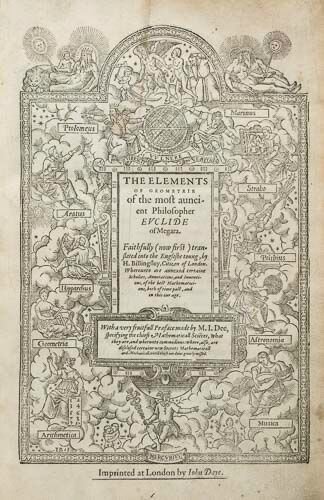 John Dee's preface is considered by many to be his most important published work. It outlines the practical applications of Euclid's work, lays the foundations for later experimental science and hints at the use of magic and the supernatural in conjunction with the natural. In addition, Dee also contributed additional theorems and annotations. The translator Billingsley became Lord Mayor of London in 1596.

The sale will also feature a selection of books and manuscripts from the growing Middle-Eastern department at Bloomsbury Auctions including the first book printed in Arabic in the Lebanon, Nieremberg's Kitab Mizan Al-Zaman… (1734) [estimate £2,000-3,000 Lot 63] and a collection of 126 leaves from a 15th century illuminated Mamluk Qur’an [estimate £12,000-18,000 Lot 66]. "The Evangelion of the greek Church, containing the Gospels arranged for liturgical reading throughout the year" (D&M). This is one of a small group of Christian Arabic books printed at the monastery of St.John the Baptist at Dair as-Shuwair in Lebanon.

Note: This is the first Dair as-Shuwair edition, but the second of this Melchite version which first appeared in 1706 with liturgical explanations. 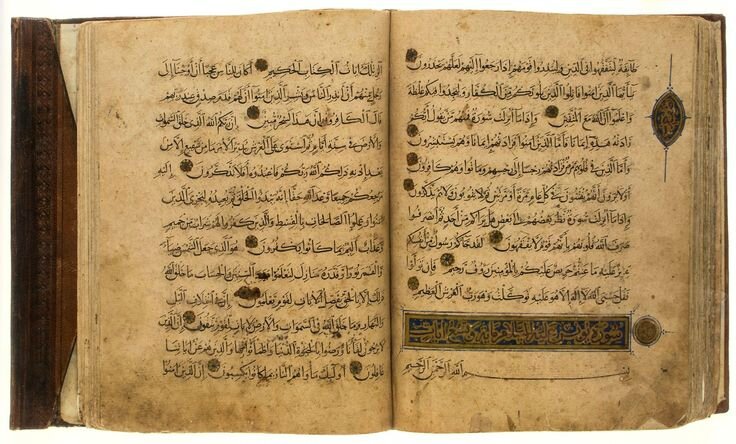 Early Illuminated Mamluk Qur'an, comprising 3 of the 7 manzil: a division of the Qur'an into 7 equal sections for the convenience of reading a section everyday of the week.

Other important Middle-Eastern works include an Indian Qu’ran in Bihari script that bears the inscription; “Looted from valley of Barkilli, Boner, 16.1.98” [estimate £750-1,000 Lot 75] and a rare early copy of Molla' Khosro's Kitab Durar Al-Hukkam… (988AH) [1580AD], an important legal treatise on the principles of legal practice. This work is thought to have been copied directly from the author’s original by celebrated writer and Hanafi jurist, Muhammad B. Faramurz b. Ali, d.1480 [estimate £800-1,200 Lot 71]. Inscription to front pastedown reads "Looted from valley of Barkilli, Boner, 16.1.98".
The London Gazette printed a report on the field operations in Bruner [present day Pakistan] on the 22nd April 1898, which provides details of the Bruner Field Expedition of 1898 lead by Major-General Sir Bindon Blood: "On the 16th [January] Brigadier-General Meiklejohn moved to Barkilli, close to the Boner Pass, where [Bindon Blood] joined him, and the force marched… to Bajkatta". 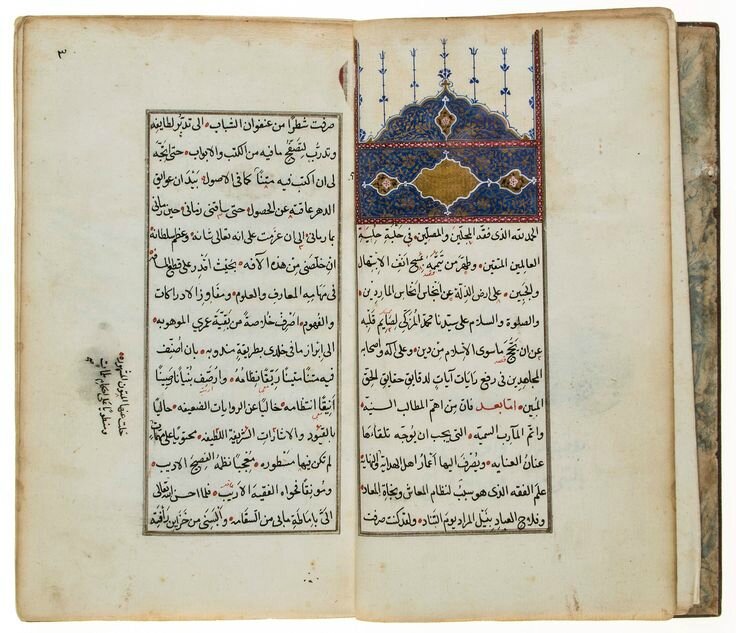 A rare early copy of this important legal treatise on the principles of legal practice, thought to have been copied directly from the author's original.

The Continental, English & Middle Eastern Books and Manuscripts sale will be held at Dreweatts & Bloomsbury Auctions’ saleroom in London’s Mayfair on Thursday 19th March 2015. The catalogue is available to view and download online at www.bloomsburyauctions.com