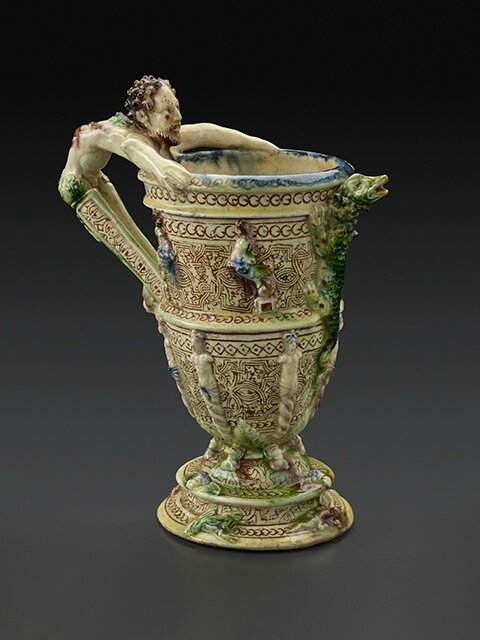 NEW YORK, NY.- Since the mid-nineteenth century, Renaissance Italian bronze statuettes, maiolica wares, Limoges enamels, and French sixteenth-century ceramics belonged to the category of objects that every serious art collector in Europe hoped to own, their value and association with royal and noble provenance bestowing upon their owners an aura of cultivation and taste. The greatest collections were assembled by Sir Richard Wallace, George Salting, Frederic Spitzer, and several members of the Rothschild family, among others. Henry Clay Frick, who emulated these European collectors, acquired in 1915 most of John Pierpont Morgan’s renowned collection of Italian bronzes and Limoges enamels. Three years later, he completed his Renaissance collection of sculpture and decorative arts with the acquisition of a Saint-Porchaire ewer, shown at right, related to a small group of elaborate French sixteenth-century ceramics. Only about seventy authentic pieces of Saint-Porchaire are known today, making them exceedingly rare. In March, with the generous support of Trustee Sidney R. Knafel, the Frick purchased an unusual Saint-Porchaire ewer decorated with a lizard spout and a handle in the shape of a bearded man. The ewer, illustrated at left, enjoys a prestigious provenance, having descended in the French branch of the Rothschild family, and recent research connects the ewer to the famed ceramicist Bernard Palissy, which makes it a particularly exciting acquisition for the museum. The newly acquired ewer is on view in the Enamels Room with the Frick’s example of Saint-Porchaire.

Little is known about Saint-Porchaire wares—neither the exact location of their manufacture nor the identity of the potter (or potters) who made them. The wares take their name from Saint-Porchaire, a small town in Poitou, a region in southwestern France rich in kaolin, the white clay used to make porcelain. The technical similarities, unusual inlaid decorations, and geometric patterns shared by Saint-Porchaire pieces suggest a rather small production concentrated in the hands of a few craftsmen, perhaps even a single person, over a period of less than twenty years, from 1540 to 1560.

Technically difficult and expensive to produce, these ceramics were far too fragile for daily use. Instead, they were intended for display in a study, to be admired next to curios and other luxury objects. The main patrons of Saint-Porchaire wares—whose coats-of-arms are found on a number of examples—include Louis de Bourbon, prince of Condé, and members of prominent Poitou families whose connections with one another date back to the Middle Ages. Today, many of these pieces are housed in the most important museums in the world.

The lizard spout on the ewer recently acquired by The Frick Collection was cast from a plaster mold from the workshop of the celebrated sixteenth-century ceramist Bernard Palissy. The mold was discovered in the 1980s during excavations that took place under the Musée du Louvre, where Palissy’s workshop had been located.

Considered the first French ceramist, Palissy in many ways embodies the French Renaissance. With a life that spanned eight decades of the sixteenth century, he had a productive career as a ceramist, geologist, and public lecturer. Born around 1510 to a family of artisans of Agen, in southwestern France, Palissy first trained as a draftsman and glass painter. In his teens and twenties, he pursued his interests in natural history and geology, working as an itinerant painter, land surveyor, and cartographer. By 1540, he had settled in Saintes (less than ten miles from Saint-Porchaire) and was experimenting with ceramic production. In Discours admirables (1580), his treatise on agriculture and geology, Palissy recalls that he became intrigued by ceramics after seeing an enameled white porcelain (or porcelainlike) cup, the beauty of which he found “immediately perplexing.” He subsequently set up a pottery studio and built a kiln, and, using a variety of clays, struggled to imitate the cup’s milky white appearance. It was only around 1545 that he succeeded in creating his first vaisseaux de terre (vessels in clay). A decade later, his “rustic ware” had been purchased by the French king, Henry II. The potter eventually gained fame for his ceramics decorated with life-cast shells, fish, frogs, and snakes, as shown in the comparative example at left. It is for such dishes and ewers that Palissy is mostly known today.

In 1563, Catherine de Medici (Henri II’s wife) became Palissy’s patron and protector, bestowing on him the royal title of Ouvrier de Terre et Inventeur des Figurines Rustiques (Worker of the Earth and Inventor of Rustic Ware). Three years later, Palissy left Saintes for Paris, where he had been awarded an important commission by Catherine to create a grotto in the Tuileries garden, near the Louvre palace. There he established a workshop adjacent to the site of the grotto.

Palissy’s ceramics attracted an array of wealthy, powerful, and noble patrons despite the fact that he was a practicing Protestant in an intolerant Catholic kingdom. In 1573, he was forced to flee Paris for the small principality of Sedan, to the north of France. Persecuted, he spent the next fifteen years alternatively making ceramics in Paris and Sedan, preaching and teaching, or in prison for religious dissent. Palissy died in jail in 1590, at the Bastille.

Although the attribution of the Frick’s ewer to Palissy seems evident (as the ewer’s spout was cast from a plaster mold found in his workshop), a few questions remain unanswered. First and foremost, it is not known when the ewer was made. Because the mold was found in Palissy’s Paris workshop, it is possible that he made the ewer in Paris, between 1566 and 1573, while working on Catherine de Medici’s grotto. By this time, however, Palissy was celebrated for his rustic wares, and the geometric patterns that characterized Saint-Porchaire wares were fading out of fashion. Who in the French capital would have commissioned a type of ceramic made a decade or so earlier in Poitou, nearly a hundred miles from Paris? It is most likely that Palissy made this ewer in Saintes sometime between 1545 and 1565. He was either imitating Saint-Porchaire wares, which were produced only a few miles from his Saintes workshop, or he was involved in the production of Saint-Porchaire wares before he began producing the rustic ceramics for which he is best known. The plaster mold used to create the Frick ewer’s spout most likely traveled with Palissy to Paris, where it was found some four hundred years later. Further research, including technical analyses and a re-evaluation of Saint-Porchaire ceramics and those attributed to Palissy, would bring new light on the connection between these two. This is an exciting research project that the curatorial team of The Frick Collection, in association with museums in the United States and abroad, looks forward to conducting in the upcoming years.