NASHVILLE, TENN.- Drawing on the combined resources of the Vanderbilt Fine Arts Gallery, the Eskind Biomedical Library Special Collections, local museums, and several private collections, Memento Mori – Looking at Death in Art and Illustration will reveal multiple perspectives on the nature of death and our attempts to memorialize the dead in order to give meaning to their lives. The selection of artwork creates an interdisciplinary approach to our understanding of the role of death and mourning in society from the sixteenth century to the present.

The oldest work in the exhibition is a second edition manuscript by Andreas Vesalius, de humani corporis fabrica (On the fabric of the human body), dating from 1555. It was the authoritative book on human anatomy for several centuries, and will be opened to a page showing a skeleton, acting alive save for its lack of flesh, that is reflectively pondering a human skull, perhaps an allusion to the temporal nature of life itself. This seminal example of medical illustration is a visual manifestation of the fact that, for many centuries, “medical exploration took place most frequently in the domain of death,” as Holly Tucker, one of the exhibition’s co-curators, writes in her book Blood Work: A Tale of Medicine and Murder in the Scientific Revolution. The piece, like many on display, is truly a blend of historic, artistic, and scientific study. American, maker unknown, Mourning Brooch in Memory of Stephen Gore with a Lock of his Hair and the Inscription on the Verso, “Stephen Gore /Born /Apl 29th 1790/Obt/Sept 16 1845,” ca. 1845. Gold, steel clasp, glass and hair. Collection of Janet Hasson.

Material featured in the exhibition covers a wide range. Artworks and illustrations that span the past four centuries explore themes such as the Danse Macabre or Dance of Death, the medieval allegory of Death’s equalizing power, represented visually by a vivified skeleton. Additionally explored are deathbed scenes, a reminder of times when the end of life was often a gathering of family and loved ones, as well as images of the living mourning over those they have lost and art created as a memorial to those who have passed. Works included are by artists such as Ivan Albright, Andrea di Bartoli, Enrique Chagoya, Sue Coe, William Edmondson, Hans Holbein, Käthe Kollwitz, Georges Rouault, Thomas Rowlandson, Stephen Tourlentes, Andreas Vesalius, Werner Wildner, and Tsukioka Yoshitoshi. 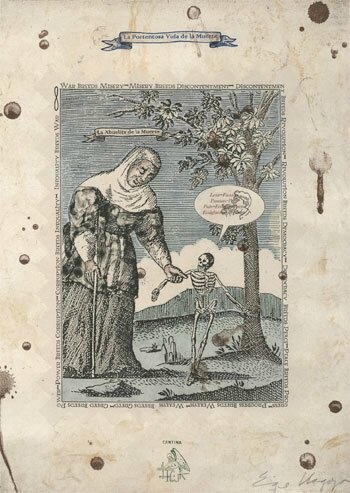 With much thanks to partnering institutions and individuals, the exhibition also includes a rich display of material culture surrounding death and historical mourning practices. Perhaps the most striking of these are a silk mourning dress dating from 1909, a simple tombstone carved by the famous African American sculptor William Edmondson, and a death mask of the physiologist Jan Purkinje. The master craftsmanship that went into creating these items and others, such as intricately woven hair jewelry, remind us of the many forms of mourning and memorialization and complement the exhibition’s look at the linkages of medicine, life, and death through the ages.