From the Neolithic Period through the 20th century: Doyle New York to auction Asian works of art on March 16

From the Neolithic Period through the 20th century: Doyle New York to auction Asian works of art on March 16 Each standing four-square on a rectangular base, the head held low with the trunk curled under between long gently curved tusks, each set with a saddle and elaborate trappings supporting a vase with a pearl and flame finial. Height 72 inches, width 47 1/2 inches, depth 24 inches.

One elephant has one side of the blanket dented inward about 2 inches, no loss to cloisonne, on the same side the ribbon that hangs over the blanket is missing a hook that secures it onto the blanket (easily repaired), small dent on the forehead with surface loss to enamel. 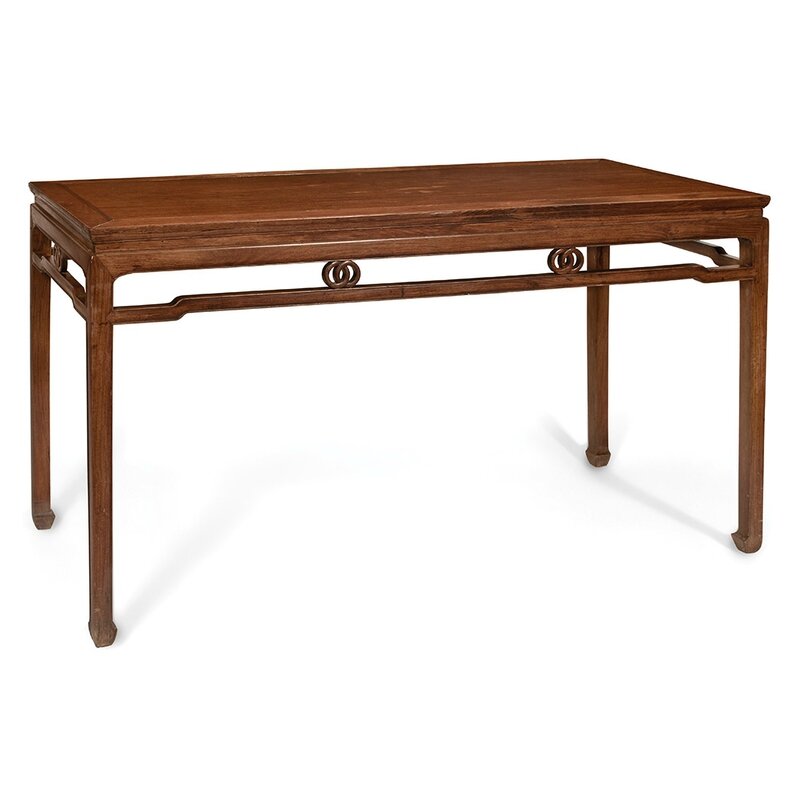 Damage to the mitered joints of the frame top and associated damage to the exposed tenons. Replaced strip to inner edge of one short framing rail. All of the transverse stretchers appear to be replaced on the underside of the floating panel with associated lacquer which may disguise the replacement of the panel. All of the double cash roundels appear to be replacements. Many associated glue blocks to the underside of the floating panel where it joins the frame and to the apron and frame. An old small patch to one leg.

Other noteworthy offerings include a Chinese red overlay pink glass bottle vase with the Qianlong Mark and of the Period, height 9 1/4 inches (est. $50,000-70,000). A Chinese soapstone seal chop attributed to the Imperial Qianlong Workshop reads 'Zhi Zhu Xing Ying'. and measures approx. 2 inches square (est. $25,000-35,000). Zhi Zhu Xing Qing referring to wisdom and learning by heart was first used by the Qianlong Emperor. Later it was engraved on the wooden plaque that hangs inside the Yu Hua Pavilion located in the Forbidden City, built in 1749 to worship Tibetan Buddhism. Bronzes in the sale feature a Sino-Tibetan gilt-bronze seated Avalokesvara, height 11 inches (est. $25,000-35,000). The compressed globular body rising to a tall cylindrical neck, supported on a slightly splayed foot, carved in relief through the transparent red overlay to the raspberry pink ground with a continuous scene of two deer, and crane amongst pine, willow, rockwork and lingzhi, the neck worked with five bats, all between a lappet band at the neck, base with incised four-character Qianlong seal mark within a double square. Height 9 1/4 inches. 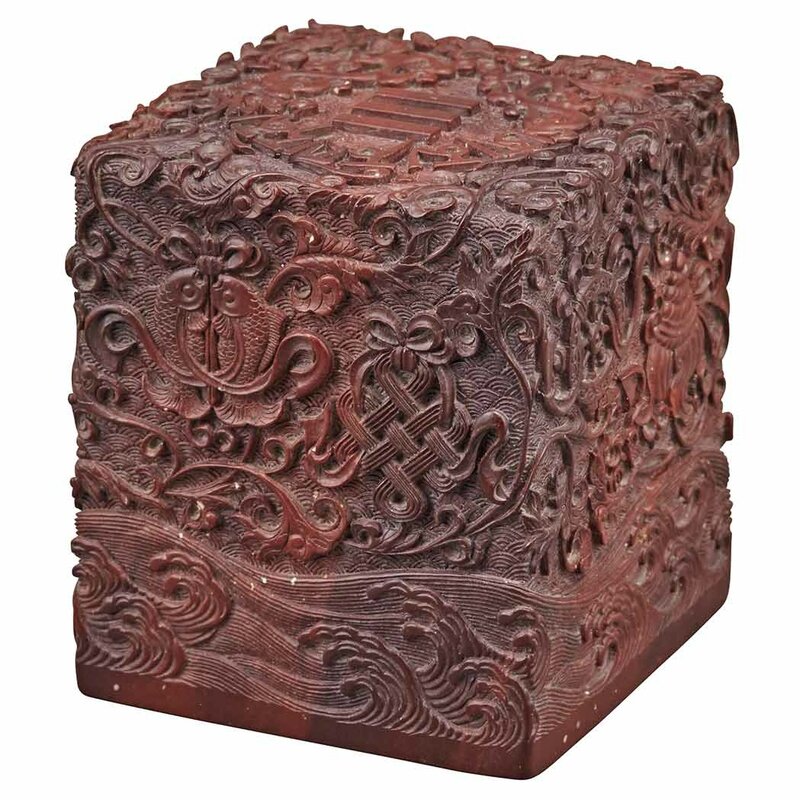 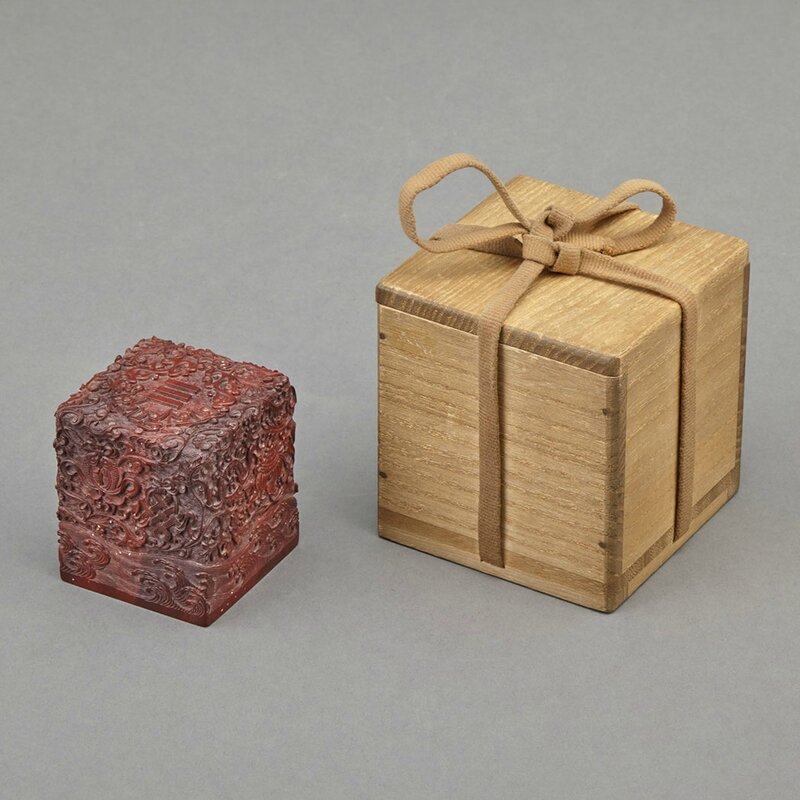 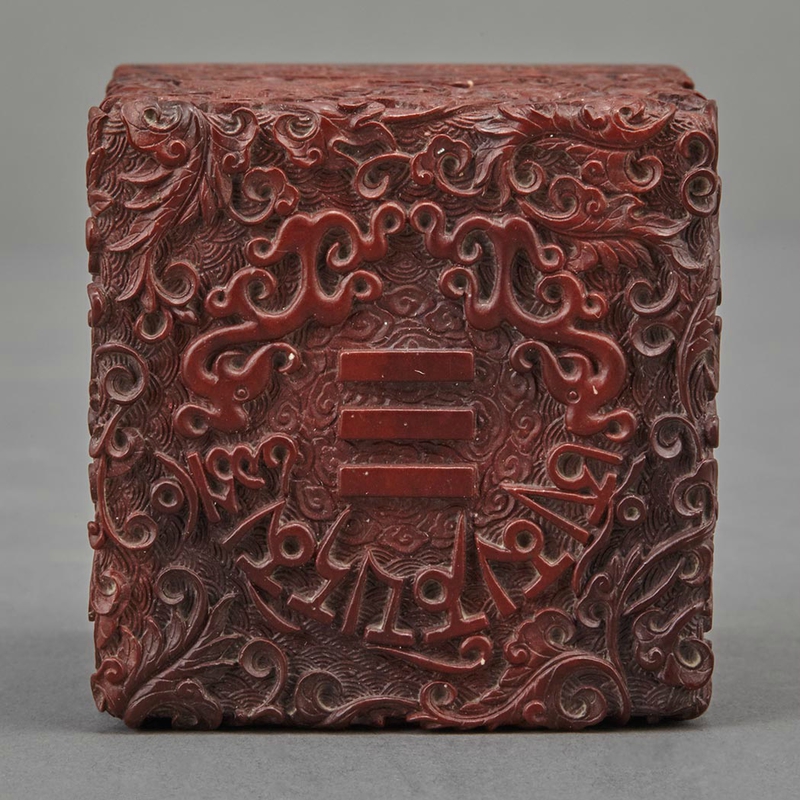 The rectangular shape elegantly carved on all sides, the top with a central 'qiang' character surrounded by two dragons and a circle of six sandskrit characters, the sides finely carved with the Eight Emblems of Buddhism on a field of Bao Xiang flowers each independently carved on a string of intertwined leafy stems, the chop reads 'Zhi Zhu Xing Ying'. Height 2 1/4 inches, width 2 inches, depth 2 inches. Very good condition. Storage box with surface wear.

Zhi Zhu Xing Qing referring to wisdom and learning by heart was first used by the Qianlong Emperor. Later it was engraved on the wooden plaque that hangs inside the Yu Hua Pavilion located in the Forbidden City, built in 1749 to worship Tibetan Buddhism Seated in a position of ease on a double lotus base, the right foot resting on a protruding lotus, the six arms holding various attributes, dressed in a long dhoti secured at the waist with a bejeweled belt, necklaces, armbands anklets and bracelets, the serene face between circular earrings, the hair gathered behind a foliate crown. Height 11 inches. Overall gilt and pigment wear.

Featured in the sale is property from the Estate of Peter K. Warren (1920-2014). A prominent figure in the beverage industry for almost 70 years, Mr. Warren shepherded Pepsi-Cola from a one-product company into an international brand.

Born in Pittsburgh, Pennsylvania, Mr. Warren was raised in New York. He enlisted in the army during in World War II and served for seven years, achieving the rank of Captain. Following the War, he briefly worked as a journalist and copy writer before beginning his career in the beverage industry at Coca-Cola. There he befriended industry icon Alfred Steele, who was Coca-Cola’s Vice President of Marketing, and he followed Mr. Steele to Pepsi-Cola in 1950. In 1952, while on business in Havana, Cuba, Mr. Warren met Flamenco dancer Maria Dolores Pardinas Noguera, whom he married after a whirlwind romance.

In 1959, Mr. Warren was named Pepsi-Cola’s Vice President of Marketing, and in 1963, he became President of Pepsi-Cola International. He served as CEO and was appointed to Pepsi’s Board of Directors. Under his leadership the firm expanded globally, and by his retirement from Pepsi in 1985, the firm had revenues in excess of $7.5 billion, with products in 150 countries and territories.

The collection of Asian works of art assembled by Peter K. Warren represents over fifty years of collecting. While developing his business career, Peter, with his beloved wife, Maria, at his side, combed the globe combining their love of travel with their growing passion for collecting. They formed long-lasting friendships with prominent dealers K.S. Lo, Jeremy Mason, Elinor Gordon, Bluett & Sons, and Vallin Galleries. The delicately rounded sides painted on the exterior with blossoming and flowering peach branches, the leafy stems extending over the rim to the interior where three iron red bats fly amid the pink blossoms, base with four-character hallmark in iron red. Diameter 6 5/8 inches.  Very good condition. The shouldered form tapering to a spread foot and rising to a tall neck with two ribs on the mid-section, the mouth with a cup-form rim, glazed overall in a medium light blue glaze, base with Yongzheng seal mark. Height 7 3/4 inches.  Very good condition. 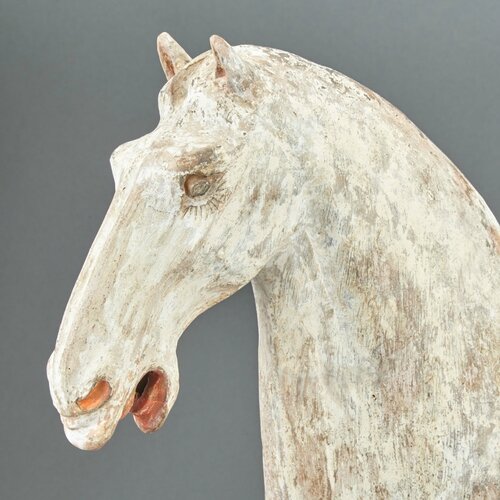 Published: Collection of Chinese and other Far Easter Art: Assembled by Yamanaka & Company, inc. under the supervision of the Alien Property Custodian 1943, pl. 518

Authentication:  Oxford Authentication Ltd. Thermoluminescence Analysis Report Sample No. 666p4 is consistent with the dating of this piece

The public is invited to the exhibition on view at Doyle New York from March 13 through 15.

Commentaires sur From the Neolithic Period through the 20th century: Doyle New York to auction Asian works of art on March 16