Back on the Collection of Barbara Taylor Bradford at Bonhams, 5 Dec 2013

Back on the Collection of Barbara Taylor Bradford at Bonhams, 5 Dec 2013 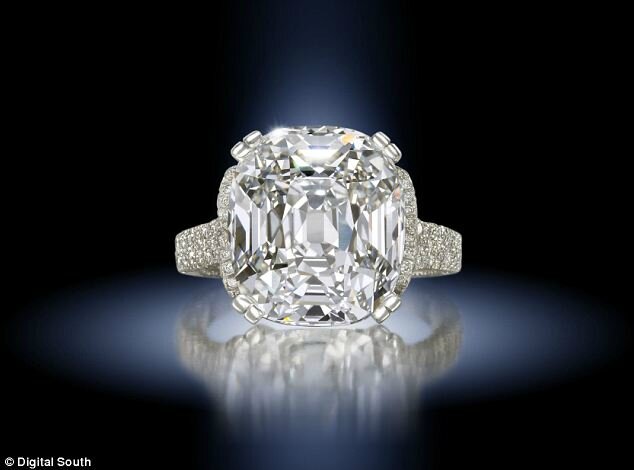 "'When you wear this, you don't need any other jewellery,' Bob said as he slipped a very large diamond on my finger. He was correct. The ring was gorgeous, a dazzler! And I was certainly dazzled by it." Accompanied by a report from Gübelin stating that the sapphire is of Burmese origin, with no indications of heating. Report number 13080104, dated 14 August 2013.

Accompanied by a report from Gübelin stating that the sapphire is of Burmese origin, with no indications of heating. Report number 9210051, dated 23 October 1993.

"I love all the movies Bob has made of my books, and I especially enjoy seeing what is known as the 'rough cut'. I remember watching 'Everything to Gain', and thinking what a splendid production it was. I was thrilled to see my characters come alive on the screen. Later that evening, over dinner, Bob gave me the famous blue-leather box from Harry Winston. Inside was a gorgeous sapphire and diamond ring. 'In lieu of applause for being up there on the screen,' Bob said. 'You produced the movie and should have the applause. And the ring!' I answered. He just laughed. The sapphire ring was always a lovely reminder of that book and movie for years. I wore it a lot, and now some other lucky lady can do the same."

Gift from Robert Bradford in 1994 to commemorate his movie of "Everything to Gain". Accompanied by a report from Gübelin stating that the sapphire is of Sri Lankan origin, with no indications of heating. Report number 13080105, dated 14 August 2013

"Sapphires are my favorite stone, and when Bob saw a magnificent sapphire and diamond brooch on display in a jeweller's shop in London he bought it. The moment I saw it I was impressed. I realised it was probably Victorian. I then wondered who it had belonged to before. The central large sapphire is an extraordinary blue and is surrounded by a diamond line border and a border of larger diamonds. It matched my sapphire ring perfectly, as Bob had known it would. The brooch actually gave me an idea for a novel, which I plan to write soon." "Coloured stones have always appealed to Bob, especially yellow diamonds. In London he found a pair of fancy yellow natural diamond earrings that had an elbow (hook) on the back of each, on which could be hung a drop. He decided I should have these and bought them as a surprise. And they were. When he gave them to me for my upcoming birthday, he said they were perfect for a sunny natured girl, which I thought was a lovely compliment."

Gift from Robert Bradford for Barbara's birthday in 1998. 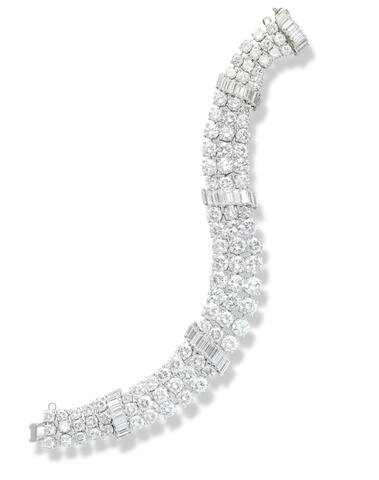 "Whenever a publisher, or somebody I did business with, told me they were about to present me with a gift, I would answer, 'Oh, how lovely, a diamond bracelet, of course'. They knew I was teasing. Bob apparently got tired of hearing this refrain. In 1986 he asked me to write the screen play for 'Hold The Dream'. He was about to start filming, but didn't like the script he had. I wrote one at breakneck speed. When I asked him how much he was paying me, he said he would give me a present later. I told him I'd heard that before. During filming, he invited me to Shepperton Studios outside London to have lunch and see the rushes (latest daily filmed segments). As we were eating in the studio canteen, he reached into his pocket and asked for my hand. I gave it to him. He dropped something cold in it. When I looked, I let out an excited yelp. Bob said, 'Now you don't have to mention that diamond bracelet ever again. I've just given it to you.' Indeed he had. It was a gorgeous antique diamond and platinum bracelet, hunted down by our jeweller friend, Claire Richter."

Gift from Robert Bradford in 1986 for writing the screenplay of his movie "Hold The Dream". 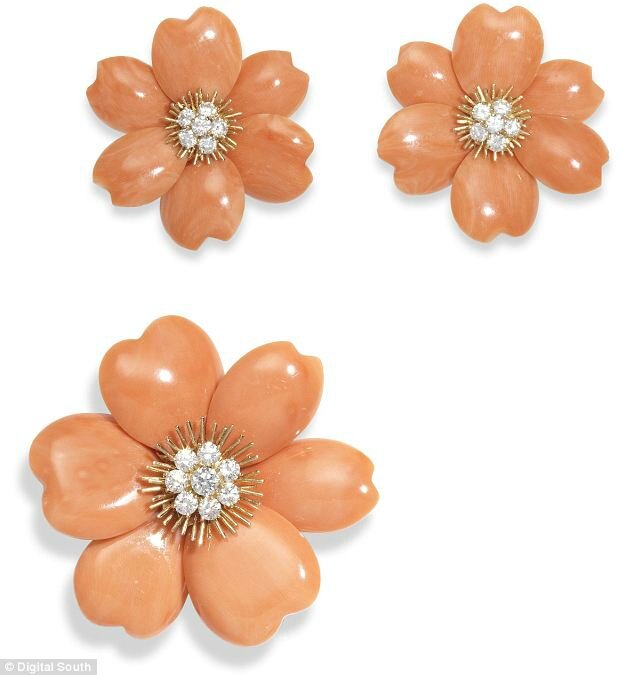 "One year, when Bob presented me with two navy-blue suede boxes, I knew immediately that he had been to one of my favourite jewellers, Van Cleef & Arpels. When I opened them, I discovered a salmon coral brooch with a diamond centre in one and matching earrings in the other. They made every outfit I wore look special, and the colour was superb. It still is. This gift was truly a big surprise. I had asked him not to buy me a birthday present because I had been given the 'Augustus' a few months earlier. He obviously didn't take my words seriously. However, he did point out that he was giving me the gift on a day that was actually not my birthday. He always has an excuse."

Gift from Robert Bradford for Barbara's birthday in 1995. When Barbara's first novel, "A Woman of Substance" was published in 1979 it went from bestseller to super seller within its first year and stayed on the New York Times' list for 55 weeks. The book tells the story of Emma Harte and the machinations and intrigue of a family retail empire. Barbara described Emma Harte as "a woman who was strong, independent, driven, ambitious, courageous – willing to go out and put herself on the line and do something. I created a woman who wanted to conquer the world."

"In my novel 'A Woman of Substance', the protagonist Emma Harte has green eyes. The great love of her life, Paul McGill, gives her emeralds to match them. The first green stones Bob gave me were a pendant and matching ring of tourmalines, each surrounded by diamonds. They had been found for him by our friend, Claire Richter, who owned a jewellery shop on Fifth Avenue. It was Claire who located the perfect diamond chain for the pendant. When Bob gave the set to me he said they matched my green eyes. I was thrilled by this gift and wore the set for years."

Gift from Robert Bradford in 1984 to celebrate the Bob and Barbara's 21st wedding anniversary. "The green tourmaline and diamond ring which matches the pendant is large and dramatic, and it always looked wonderful worn with cream, white and pale blue. Some years after Bob gave it to me, the ring was redesigned, as was the pendant. New York jeweller Dvora of Tambetti, Inc created new diamond settings which show off the tourmalines to great effect. The additional diamonds add to the sparkle. Now someone else can wear the ring and pendant whether they have green eyes or not."

Gift from Robert Bradford in 1984 to celebrate Bob and Barbara's 21st wedding anniversary. "Pearls seem to be my trademark, as far as my fans are concerned. If I'm not wearing pearls at a book event they're attending, they get quite upset. It doesn't matter if they're my white, pink or golden pearls, as long as a string is around my neck they're happy. It was Bob who found a fine row of Tahitian dove grey pearls which are quite extraordinary. They appear to change color in different light, and with what I'm wearing. The pearls can acquire a silvery sheen, turn very dark, even almost black. I always enjoyed wearing them, and had many comments and questions about them over the years. The Tahitian grey earrings with diamonds in a half moon shape are equally as beautiful. When Bob gave them to me I was astonished, and thrilled. He told me it took the jeweller quite a long time to collect the pearls, since they're all about the same size."

Gift from Robert Bradford for Christmas. "Much to my surprise, my novel, 'A Woman of Substance', was a bestseller in foreign languages. In particular, it was a great hit in France and made many of the French bestseller lists. To celebrate this unexpected little triumph, Bob took me to Madame Perrin's shop when we were in Paris, where we picked out a bracelet-watch together. I feel lost if I'm not wearing a watch, but Bob felt I should have one that looked dressier. Hence the diamond-and-gold Piaget he bought me. I've always liked this watch for its daintiness as well as its chicness."

Gift from Robert Bradford in 1981 to celebrate the French edition of "A Woman of Substance". "When I broke my right wrist in the early 1980s, I still wrote even though my hand and arm were in a cast. We even went on holiday at Christmas to Las Brisas in Acapulco. At my request Bob had arranged for me to have a typewriter there, and I continued to work on 'Voice of the Heart', my second novel, wearing the cast. When we returned to New York, Bob came home one evening bearing a gift. As he placed a gold and diamond bangle on my left arm, he called it my badge of honour for being a real professional. It was a lovely thought, a superb gift, and once the cast was off I could wear it on my right wrist."

Gift from Robert Bradford in 1982 to celebrate Barbara's finishing "Voice of the Heart". "I have been addicted to brooches ever since I was in my twenties and have collected them over the years. Many were bought for me by my husband. He came back from a London trip one December, bringing a special gift. It was a glamorous brooch he had found at the Bond Street jeweller Moussaieff. The large Keshi pearl 'star' was encrusted with diamonds and it was a show stopper. It made a dramatic statement on evening gowns, dresses and jackets, and you would be surprised how many people wanted to buy it right off my dress."

Gift from Robert Bradford to celebrate Bob and Barbara's 42nd wedding anniversary in 2005. "In the early 1980s, Bob and I got married again, just for the fun of it. The second wedding took place on an island in the Caribbean and I wore a short white dress and carried a bouquet of flowers. Bob gave me yet another wedding ring, this time a three-color gold Trinity ring. I have a lot of wedding rings from him, but this was a favourite at that particular time."

Gift from Robert Bradford in 1984.

Commentaires sur Back on the Collection of Barbara Taylor Bradford at Bonhams, 5 Dec 2013