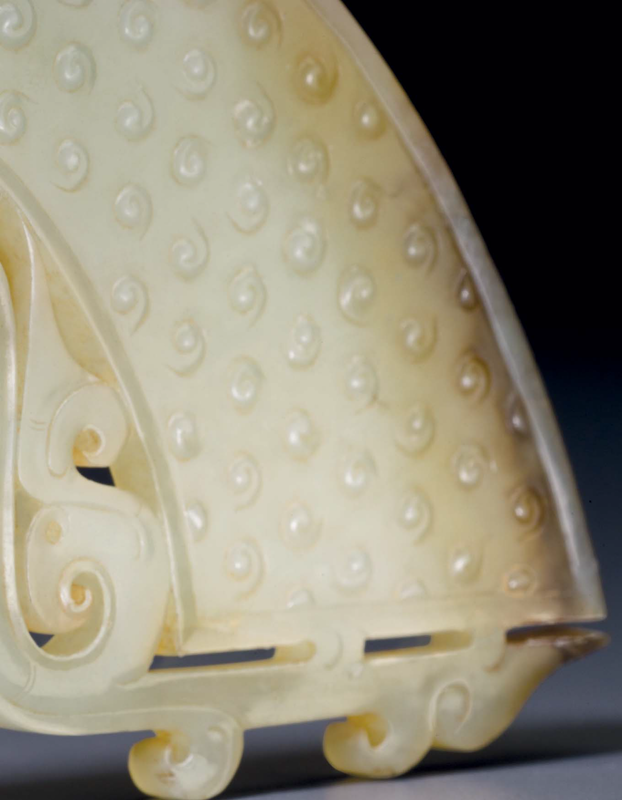 Each side of the upper section finely carved in relief with comma spirals, a small hole drilled from one side below the rim, the lower section carved in symmetrical, curvilinear openwork with elaborate hooked scrolls formed by a pair of adorsed birds with curled wings and long bifurcated tails that trail along the bottom of the arc, the semi-translucent stone of warm white tone shading to brown (tangyu) at one edge - 6 3/8 in. (16.2 cm.) wide, box

Provenance: The Collection of Robert H. Ellsworth, New York, before 2000.

Notes: Tradition holds that the huang, a flat arc of jade, originated in Neolithic times and, by early historic times, had come to number among the six ritual jades, or Liu Yu Liu Rui, along with the bi, cong, gui, zhang, and hu. Among those ritual jades, the bi was said to symbolize the sun, the cong the earth, and the remaining four, the cardinal directions with the huang, in particular, being associated with north. By the Zhou dynasty, however, the huang had been appropriated as an article of personal adornment and typically was incorporated into pendants that were strung with jade beads and other ornaments and that were suspended from the waist or shoulders. The small perforation at the top of the arc permitted this huang to be attached to other pieces, perhaps with a silken cord, and the tiny perforations worked into the outer edges of the openwork design within the arc permitted yet other pieces to be linked to this huang. Mentioned in such classical texts as the Zhou Li, or Rites of Zhou, such pendants served as symbols of virtuous men and as emblems of rank. The Zhou Li notes, for example, that “All belts must have jade pendants. Without cause, a gentleman is never without his jade. Is it because a gentleman’s virtue is likened to his jade?” Apart from the symbolism of the jade and the beauty of the stone, early Chinese appreciated the pleasant tinkling sound the jades made as they touched each other when the wearer moved; in fact, the Chinese term cong refers to that very sound (though it must be noted that this character differs from that used for the ritual jade cong mentioned above). Jades from the Neolithic era occur in many different colors, while those from the Shang dynasty generally show a more limited range of colors, usually sea green, bluish green, or grey. By the late Eastern Zhou, however, taste had come to embrace light colors, so that most jades of that era are pale greenish white or even white, like this huang, and often boast splashes of medium or dark brown.

Once appropriated as an article of personal adornment, the huang began to be embellished with carved designs. Those from the Western Zhou period, for example, often feature boldly carved stylized birds, but those from the late Eastern Zhou, such as this magnificent huang, typically exhibit a subtly raised border around the edges of the arc and sport an array of small, regularly spaced, comma-shaped embellishments that are known as guwen or guliwen, meaning “grain patterns”. Although the space within the arc is usually open, rare examples, such as this piece, feature interlaced, openwork embellishments therein.

A stylistically related huang in the Grenville L. Winthrop Collection, Harvard Art Museums, lacks the openwork decoration within the arc of the Ellsworth example (1943.50.604); it is published in Max Loehr, Ancient Chinese Jades from the Grenville L. Winthrop Collection in the Fogg Art Museum, Harvard University (Cambridge: Fogg Art Museum), 1975, p. 331, no. 485. This huang also is close in style to a jade huang that was sold at Christie’s New York, 16 October 2001, lot 209.