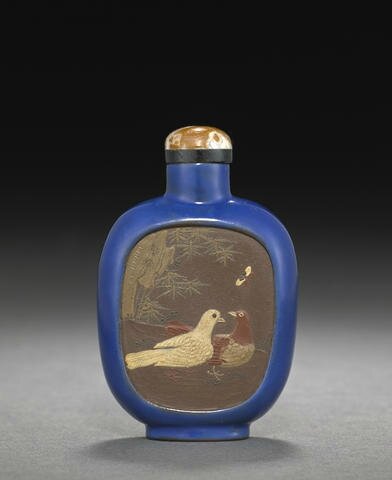 NEW YORK, NY.- Asia Week 2015 at Bonhams New York was opened with the auction of Fine Chinese Snuff Bottles from the Collection of Barbara and Marvin Dicker, which took place at the Madison Avenue galleries on March 16. In a packed saleroom, the collection fetched far above its high estimates – with 97 per cent sold by lot – to make a total of $708,438.

The Dickers began collecting Chinese snuff bottles in the early 1980s, fascinated by their intricate carvings, beautiful natural materials, and the symbolism of their decoration. After becoming enamored with the antique Chinese pieces when hunting for Asian art for their home, they were active in the International Chinese Snuff Bottle Society for 30 years, both serving as directors of the Board.

The top lot was a wonderful enameled and slip-decorated Yixing bottle (1800-1880) which soared past its pre-sale estimate of $5,000-7,000 to make $37,500. High-quality Yixing bottles, particularly those with such beautiful slip decoration, have become quite scarce and are popular on the market with new participation from Mainland Chinese buyers. The skillfully crafted rounded-rectangular form of the bottle, with recessed panels on the flattened sides bearing the slip decoration, features paired dogs and doves that are symbols of conjugal bliss.

Of rounded rectangular form with a cylindrical neck, flat lip, slightly splayed oval foot ring, each side with a recessed panel decorated with a slip design, one depicting two Pekinese frolicking beneath flowers issuing from rockwork, the reverse side featuring two doves in a garden with ornamental rocks, bamboo, and a butterfly in flight, all set against a ground covered with cobalt blue enamel except the mouth and foot rims. 2 1/2in (6.4cm) high

Notes: Paired dogs and doves, like other paired creatures, suggest conjugal bliss. Similar subjects are seen on porcelain wares of the Qing dynasty as well. Other Yixing bottles of this design include two illustrated by Bob C. Stevens, The Collectors' Book of Snuff Bottles, John Weatherhill, Inc., New York, 1976, pp. 102-103, nos. 334, 335, and 336, and one illustrated by R. Kleiner, Chinese Snuff Bottles in the Collection of Mary and George Bloch, published to accompany an exhibition at the British Museum, June 20th-October 15th 1995, p. 369, no. 241. A Yixing bottle in this series with enameled decoration, but with landscape scenes set within a blue-enameled surround, and impressed with a cyclical date, jiyu (1849) is illustrated in An Imperial Qing Tradition, Chinese Snuff Bottles from the Collection of Humphrey K. F, Hui and Christopher C. H. Sin, no. 46.

A beautifully carved cameo agate bottle from the Suzhou School (1780-1860) also performed brilliantly, far outstripping the estimate of $8,000-12,000 to fetch $32,500. The bottle, carved from translucent grey and russet-toned stone, depicts Liu Hai, the Chinese god of wealth and prosperity, who carries a double-gourd and broom as a three-legged toad follows behind him and a bat takes flight above. Of compressed, high-shouldered ovoid form with a waisted neck, flat lip and foot, the translucent gray and russet-toned matrix skillfully carved in high relief, utilizing the dark markings, depicting Liu Hai carrying a double-gourd and broom with a three-legged toad behind him under a bat in flight, all within a continuous serrated rocky setting accented by pine trees. 2 1/16in (5.2cm) high

Another highlight was a yellow jade bottle (1750-1820) estimated at $8,000-10,000, which achieved $32,500 after heated bidding on the telephone and in the room. The Dickers had a particular fondness for their collection of jade bottles, and this example was one of the finest. Its rare color, a hue of yellow which the Chinese call ‘steamed chestnuts’, makes it a particularly desirable piece Well-hollowed, of rounded rectangular form, rising from a fine oval foot ring to a cylindrical neck, flat lip, the narrow sides flanked by a pair of well-defined lion mask-and-ring handles; the soft-hued yellowish stone with a faint green tinge, marked with an off-white patch to one side. 2 1/4in (5.7cm) high

Other jade bottles made impressive prices, demonstrating the popularity of the wonderfully tactile stone. A carved white jade bottle (1750-1850) made more than four times its high estimate of $7,000, selling for $28,750. Designed as a cloth bag tied at the neck with a ribbon, it is decorated with delicate carvings of bees and a monkey climbing towards the opening of the bag. Designed as a cloth bag tied at its neck with a ribbon over a bundle of wannianqing (rohdea japonia) on one side above two bees, one of the narrow sides decorated with a monkey climbing up towards the opening of the bag; the white stone with very pale russet and cloud-like inclusions. 2 5/8in (6.7cm) high

The design of combining monkey and a tied bag together creates the pun for daidai fenghou (May every generation be given the title of marquis). The carved decorations ofwannianqing (rodhea japonica) and feng (bee) further signifies the same wish. For discussions on the many indications appeared in Chinese art design, refer to Hidden Meanings in Chinese Art, Terese Tse Bartholomew, Asian Art Museum in San Francisco, 2006.

Dessa Goddard, Vice President and Director of Asian Works of Art at Bonhams in North America commented, “Bonhams continues to be a leader in the Chinese snuff bottle market, and we are committed to our mission of bringing fine private collections to the market for the international collecting community. We hold world record prices in this field, and are committed to both our buyers and sellers in promoting this marvelous and unique miniature art to new and seasoned collectors. We are delighted that the Dicker collection achieved such a wonderful reception today!”