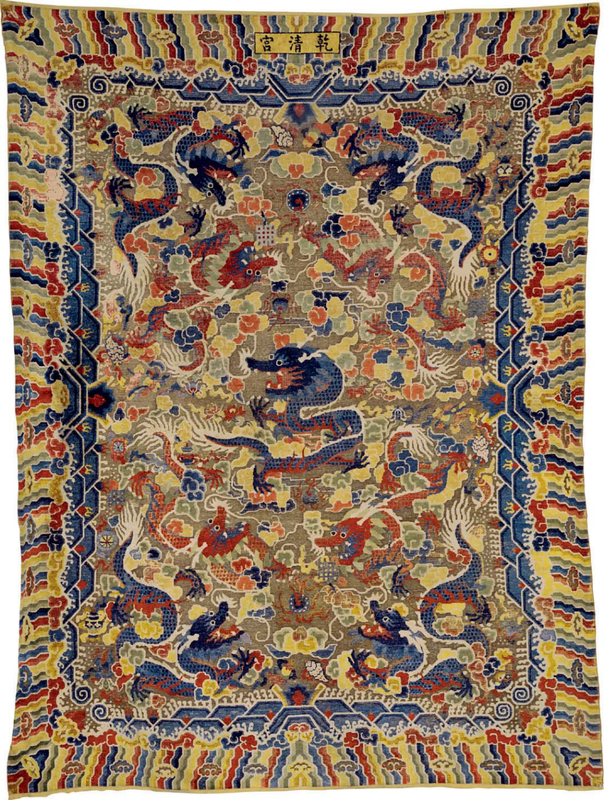 Woven with a three character inscription, Qianqing Gong, which translates to ‘The Palace of Heavenly Purity’. Having nine dragons chasing flaming pearls on the silver ground with a polychrome wave pattern border. Approximately 11 ft. 10 in. x 8 ft. 9 in. (361 cm. x 267 cm.)

Notes: The Qianqing Gong, or Palace of Heavenly Purity, the first of the Three Rear Halls, formerly contained the sleeping chambers of Ming emperors. During the Qing dynasty, however, emperors began to manage state affairs from the Qianqing Gong. The Palace was eventually turned into a formal living room and offices where emperors summoned subordinates for consultation, received foreign envoys, as well as gave banquets for family members, relatives and high officials (see Wan-go Weng and Yang Boda, The Palace Museum: Peking, Treasures of the Forbidden City, 1982, p. 50). It is uncertain whether or not this carpet was ever actually in the Palace but if it were, carpets inevitably would have been replaced at regular intervals.

Contemporary Western scholarship has traditionally placed these silk and metallic thread carpets as late 19th or early 20th century based on the dyes and weave. Most carpets woven during the late 19th century are copies of earlier carpets yet there are no known examples of Chinese silk carpets with similar designs, let alone examples with metallic thread, from the 17th century or earlier. One wonders if they did exist and are now either destroyed or not yet discovered.

Mr. Ellsworth treasured this carpet and always referred to it as a Qianlong Imperial carpet, and like some, felt this group could be earlier than current scholarship believes.