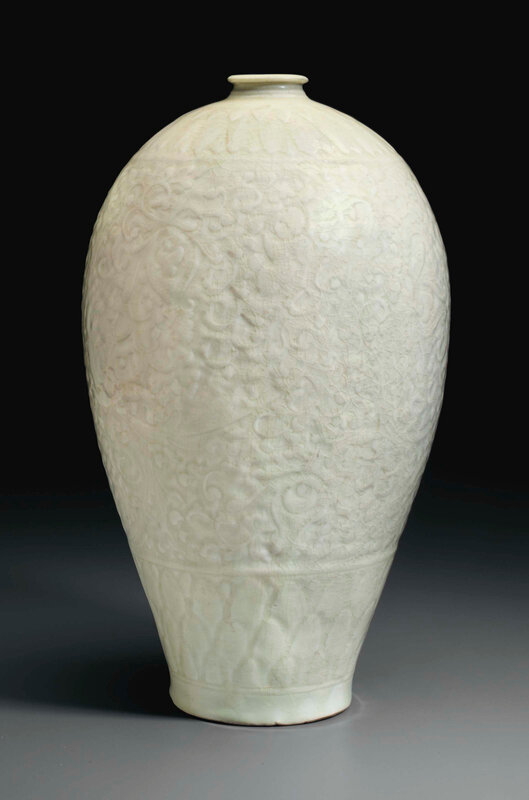 The tall, tapering body carved in low relief with a wide band of boys amidst dense foliate scroll between bands of overlapping petals below and on the shoulder above, covered overall in a transparent glaze of pale olive tone, box

Notes: Jan Wirgin, in Sung Ceramic Design, London, 1979, pp. 179-81, discusses the origin of the boys among floral scrolls motif, citing the influence of Indian cave art and the Buddhist motif of the reborn souls on lotus flowers from the Tang period. By the Song dynasty, when the design was immensely popular on wares in various materials such as silver, bronze, textile and jade, and at different ceramic kilns including Yaozhou and Ding, it is clear that it had become a popular motif suggesting fertility and abundance.

A Qingbai meiping of slightly larger size (41.9 cm.) carved with an overall design of boys among peony scrolls, in The Art Institute of Chicago, is illustrated in Qingbai Ware: Chinese Porcelain of the Song and Yuan Dynasties, Percival David Foundation of Chinese Art, London, 2002, p. 160, no. 83.

Oxford thermoluminescence test no. P114n76 is consistent with the dating of this lot.