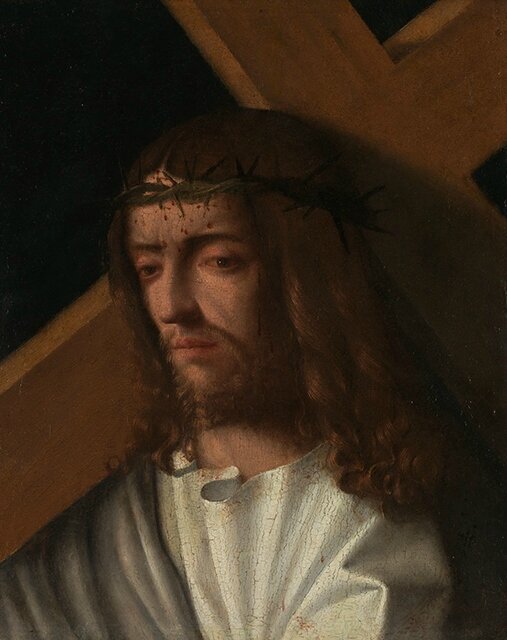 LONDON.- A rare early Italian Renaissance painting that has never been publically exhibited has been gifted to the National Gallery and is now on display.

Christ carrying the Cross has been generously presented to the National Gallery by Angus Neill. Mr Neill, a loyal supporter of the Gallery, said:

“For many years, regular visits to the National Gallery have given me great pleasure. I hope that this gift goes some way to thanking the Gallery for all that it – and its collection – have done for me.”

The work is attributed to Giovanni Bellini’s workshop and is the first Venetian version of this composition known in the UK. This is the first time that the painting has been publicly exhibited, having been in Mr Neill’s ownership since 2002.

Made as a private devotional work, as an aid for prayer and contemplation, this unflinching depiction of Christ’s misery is an emotionally powerful image. There are no narrative elements to the work, with a plain, dark background deliberately directing the viewer’s attention to Christ’s suffering. It serves as an intimate portrayal of the Saviour, not as a divine ideal, but as an individual experiencing palpable human pain.

Although the painter of 'Christ carrying the Cross' has not been securely identified, it is the work of an undeniably talented painter, equipped with both technical ability and emotional intelligence. The composition derives from the great Venetian master Giovanni Bellini, yet the artist responsible for this picture – whilst under Bellini’s influence – has stamped his individuality on a subject much painted by the master and his pupils.

This theme was enormously popular in Northern Italian painting in the last quarter of the 15th century. Initially appearing in Milan in the 1480s, the depiction of Christ’s face, shown with his cross on his way to Calvary, was adopted by several well-known workshops, including that of Leonardo and Andrea Mantegna, who each produced their own different versions of the subject.

Caroline Campbell, National Gallery Curator of Italian Paintings before 1500, said: “There are around sixty-five known variants of this composition by Giovanni Bellini and members of his workshop. One of the best known versions belongs to the Gardner Museum in Boston. That picture was purchased by Isabella Gardner, the founder of that museum, in 1896 and was apparently her favourite. She often placed a vase of violets in front of the painting, a tradition that is maintained by the museum to this day.”

'Christ carrying the Cross' joins the National Gallery’s collection as the first Venetian example of one of the most important genres of private devotional painting in Renaissance Italy. The painting will not only enhance our exceptional collection of Venetian Renaissance painting, but further strengthen our knowledge of Bellini’s workshop and the great many painters that either passed through or were influenced by his distinct style.

National Gallery Director, Dr Nicholas Penny, said: “The painting is a great puzzle which someone among our 6 million viewers will surely be able to solve. It is also a very moving and beautiful image by which thousands will be touched and not easily forget. We are extremely grateful to Angus Neill for his generosity.”

'Christ carrying the Cross' is on display in Room 62 of the National Gallery alongside works by Bellini, Mantegna and Cima.