Sotheby's to offer the historic collection of Mary, Duchess of Roxburghe

Sotheby's to offer the historic collection of Mary, Duchess of Roxburghe Duchess of Roxburghe’s Heir, Bamber Gascoigne, To Secure The Future of Her Country Retreat, West Horsley Place, by Channelling Funds from the Sale into Restoring the 16th Century House. Photo: Sotheby's.

LONDON.- From the remarkable story of the Duchess of Roxburghe’s life and the exquisite objects she was surrounded by emerges a portrait of an England that no longer exists but was preserved, untouched for almost half a century, at her country retreat West Horsley Place. A story that unites two of the most powerful British dynasties of the last century and is interlinked with the British Royal family throughout the 20th century.

Throwing open the doors of West Horsley Place to the public for the first time in the history of the quintessentially English red-brick 16th century Mansion and 400-acre Surrey estate, Sotheby’s London announced the sale on 27th May 2015 of exquisite objects from Mary, Duchess of Roxburghe’s varied collection. The 700 lots to be offered encompass furniture, paintings, Jewels, Silver and Precious Objects and carry with them the extraordinary provenance and history, outstanding taste and sense of ceremony particular to the lifestyle of the British Aristocracy over the last century.

When the Duchess of Roxburghe passed away in 2014, her heir – much to his surprise – was her nephew Bamber Gascoigne. Though Bamber had visited the house many times he, like all other family members and guests, hadn’t once set foot beyond the great stone hall in which formal meals were held, the drawing room and garden room. The labyrinth of rooms that lay beyond contained the furniture and adornments that had been brought together by the Crewe family and consolidated at West Horsley Place from their numerous great houses across Britain. From the bespoke livery of the staff who served the family, to the monogrammed china and glassware with which they entertained the Royal, the great and the good. From the gown worn by the Duchess when bearing the train at the coronation of Queen Elizabeth to the specially commissioned tiaras for the numerous society occasions that Mary Roxburghe attended. These precious objects had been packed away in the monogrammed family trunks, marking a new chapter in the Duchess’s life - and reflecting how Modern Britain significantly altered the lifestyle of the British aristocracy - when she moved to West Horsley Place. They will now be offered for sale, presenting an opportunity for all to enjoy the riches of the highest echelons of British society, with the funds of the sale being used to secure the future of West Horsley Place. Duchess of Roxburghe’s Heir, Bamber Gascoigne, To Secure The Future of Her Country Retreat, West Horsley Place, by Channelling Funds from the Sale into Restoring the 16th Century House. Photo: Sotheby's

The historic house has remained untouched for decades and, in need of significant essential restoration, Bamber Gascoigne has resolved to undertake the work on West Horsley Place to secure its future, using funds raised from Sotheby’s sale of the contents to do so. He comments: “West Horsley Place played an integral part in my aunt Mary Roxburghe’s fascinating life. It was completely unexpected by me that I would be heir to her estate. She had expressed that, given the work required to restore the house, she expected I would sell it. But having spent many memorable times with my aunt here, and knowing how special the house was to her and her family, together with my wife I decided to take up the challenge of carrying out the essential work to the house to ensure that it can withstand what may lie ahead over the course of its future, and continue to stand as a monument of its remarkable past.

“The history of West Horsley Place dates back as far as the 11th century, and the 16th century reconstruction of the house hosted notable guests including Henry the XVII. It also carries the legend of Sir Walter Raleigh’s embalmed head being buried in the garden from the time his wife and son lived there, and the house was also the depository for the famed papers of Sir Edward Nicholas, Secretary of State to Charles I, which are now largely among the Egerton manuscripts in the British Museum. With this and the other literary associations of the house in mind, my aunt left Trinity College Cambridge their choice of books from the three miles of book shelves to their library.”

Daughter of the beautiful Peggy Primrose (who was daughter of Rothschild heiress Hannah and British Prime Minister the Earl of Rosebery (est. £10,000-15,000), Mary Evelyn Hungerford CreweMilnes (1915-2014) was named after her godmother Queen Mary - King George V was her godfather. She grew up at Crewe House in the heart of Mayfair and London’s glittering high Society, host to the political figures and titled grandees of the day who attended the balls and dinner parties that her parents held – it was at one of these Crewe soirees that a young Winston Churchill was to first spy his beloved Clemmie across the ballroom. Spending three years of her early childhood in Paris where her father was made French Ambassador, Mary’s mother was the ultimate hostess, and in classic, majestic Rothschild tradition would welcome as many as 300 dignitaries at formal receptions, swathed in a ten foot white cut-velvet processional cloak studded with paste stones, mesmerising her young daughter (est. £800-1,200). A great beauty, aged 19 Mary was engaged to the dashing and very eligible 22 year old Duke of Roxburghe and thus secured an extraordinary coming together of two of Britain’s great aristocratic families (Mary with her Cartier engagement ring, est. £8,000-12,000). A ball was held at Crewe House, attended by the King and Queen, and the silver and glass and extensive Crewe china service (included in the sale) was taken out of stores once more for an impressive banquet, one of the last of its kind that London was to see. Wedding gifts were generous and included the ultimate luxury for the young couple, a silver breakfast-in-bed tray (est. £200-300) along with many other items that were gifted such as a silver monogrammed canapé tray given by Princess Royal (est. £500-800). 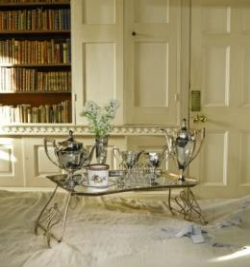 The fairytale wedding of 1935 at Westminster Abbey was such a significant social occasion that it was screened in cinemas nationwide. The Duchess of Roxburghe rose to the heart of the British establishment, residing at Floors Castle in Scotland. For the next four years the couple travelled extensively, to India and closer to home. Mary also threw herself into the great sporting activities on the estate (fishing rods and golf clubs and ice skates est. £400-600) until the windows at Floors Castle were blacked out with the advent of WWII. To remain by the Duke’s side throughout, she embarked for the Middle East against all advice, her tan Cartier suitcases and blue Hermès valise by her side (estimates from £600-800). Other glamourous wives joined the party and turned the wartime city of Cairo into ‘Ascot Ladies Day’ - much to the horror of commentators. Mary retreated, and departed for England. The fairytale wedding of 1935 at Westminster Abbey. Photo: Sotheby's. Following the war divorce papers were issued. Much to her surprise, the Duke had the butler deliver her divorce papers to her on a silver salver while they were at breakfast. Mary barricaded herself into a wing at Floors, and – in spite of the Duke cutting off power and water supplies – remained there for almost two months. Eventually the soon-to-be Prime Minister intervened and a settlement was reached through the intervention of the Earl of Home. Following the settlement, Mary Roxburghe split her time between her elegant London apartment and her family’s country retreat West Horsley Place, which her parents had bought in the early 1930s. With its glorious English gardens and an idyllic untouched stillness, the house and estate nestle between tall gates at the foot of a long drive. It was to be the ultimate place of sanctuary, contrasting the splendour of Mary Roxburghe’s childhood home of Crewe House, Crewe Hall and later her own Kensington apartment. When Mary inherited West Horsley Place in 1973 it became her personal retreat, and has since stood still in time, preserving the history of an England now lost forever, but for the wonderful objects such as those to be offered in this sale, in addition to a number of Jewels from the collection which will be offered in Sotheby’s Geneva Magnificent Jewels Evening Sale on 12th May 2015. 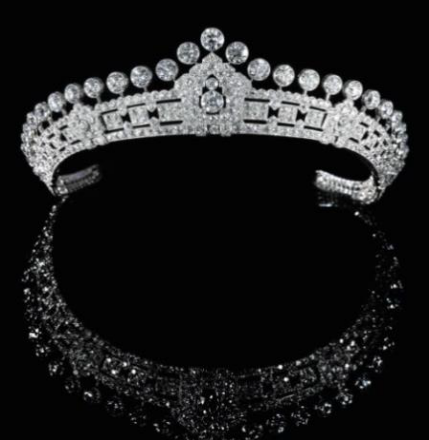 Commentaires sur Sotheby's to offer the historic collection of Mary, Duchess of Roxburghe