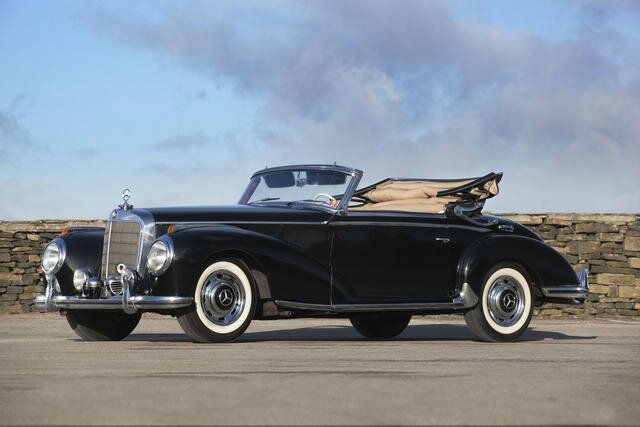 More expensive than the 300 SL sports car and almost double the price of the contemporary top-of-the-range Cadillac, the Mercedes-Benz 300 S was one of the world's most exclusive automobiles. It is also historically significant as one of Mercedes-Benz's first all-new designs of the post-war era, debuting in the autumn of 1951. The 300's arrival re-established Mercedes-Benz in the front rank of prestige car manufacturers, marking as it did a return to the marque's tradition of building high-performance luxury automobiles of the finest quality.

Although Mercedes-Benz would adopt unitary chassis/body construction for its lower and mid-priced cars as the 1950s progressed, the retention of a traditional separate frame for the 300 enabled a wide variety of coachbuilt body types to be offered. The 300's cross-braced, oval-tube chassis followed the lines of the 170S and 220, all round and four-wheel drum brakes, but incorporated the added refinements of hypoid bevel final drive, dynamically balanced wheels and remote electrical control of the rear suspension ride height.

Initially developing 150 bhp, the 3.0-litre, overhead-camshaft, six-cylinder engine - used in fuel-injected form in the 300 SL sports car - was boosted in power for the succeeding 300b and 300c models, finally gaining fuel injection in the restyled 300d of 1957. Other improvements along the way included larger brakes (with servo-assistance from 1954), optional power steering (on the 300d) and the adoption of three-speed automatic transmission as standard on the latter. By Mercedes-Benz's most experienced craftsmen, the Mercedes-Benz 300 was luxuriously appointed and trimmed with materials of the highest quality. Fast and elegant, it was one of very few contemporary vehicles capable of carrying six passengers in comfort at sustained high speeds. The conservatively styled 300 saloon was soon joined by the 300 S Coupe , a model which succeeded in recapturing all the elegance of the pre-war 540K. Introduced at the Paris Salon in October 1951, the 300 S was built in two-seater coupé, cabriolet and roadster forms on a shortened 300 saloon chassis, the cabriolet being the more luxurious of the two soft-tops. Indeed, with its lined hood erected, the cabriolet was every bit as quiet and comfortable as the fixed-head coupé.

Not only was the two-seater 300S considerably lighter than the saloon, it was also more powerful, boasting an engine equipped with triple (as opposed to twin) Solex carburettors and a raised compression ratio. Maximum power output was increased to 150bhp and top speed to 175km/h (109mph). Unlike some of its Spartanly furnished contemporaries, the 300 S boasted as lavishly equipped interior featuring supple leather upholstery, beautiful burr walnut trim, chromium-plated dashboard instrumentation and precision-made switch gear.

Elegantly styled in the pre-war manner yet technologically bang up to date, the 300 S was built to the Stuttgart firm's uncompromising quality standards. Inevitably, production was limited, only 760 examples of the 300 S/Sc (560/200) leaving the factory between 1951 and 1958, of which only 203/49 were 300 S/Sc cabriolets. Ownership of such an exclusive automobile was necessarily restricted to a wealthy few, among them film stars Cary Grant and Gary Cooper, and the Aga Khan. 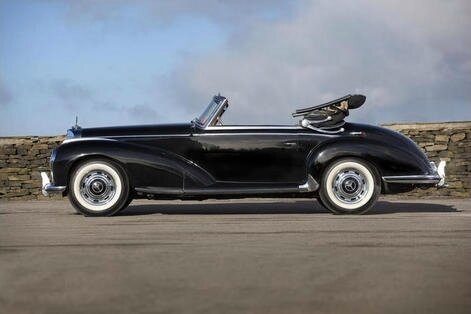 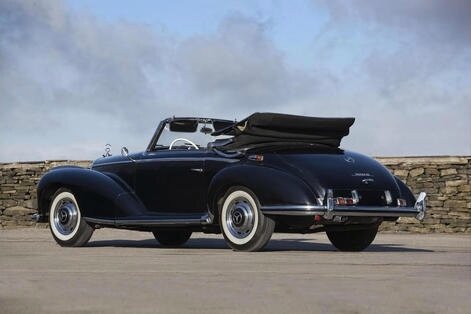 Chassis number '4500019' was delivered new in 1954 to a German industrialist, the owner of a rubber factory near Frankfurt, complete with a full set of pigskin luggage, including the rare round suitcase. He kept the car until 1973 when it was purchased by another German entrepreneur for his extensive private collection where it remained for nearly 30 years. The original invoice when the car changed hands from the first to the second owner is in the file. The 300 S was one of the latter's favourite cars and was used for touring and classic rallies after he moved to Switzerland. In 1989 he commissioned Garage P de Siebenthal, based in Lausanne, Switzerland to undertake the car's restoration (invoices on file). In the course of these works the car received a new interior, a brake overhaul, a general major service and new carpets.

At the same time the interior woodwork was restored and re-lacquered (10 coats), new shock absorbers fitted, the steering wheel restored and a new hood lining installed. The invoice amounts for these works were CHF 32,080.50 and CHF 16,190. Also on file is a quantity of old invoices dating back to the 1950s; a copy of the original German registration; the aforementioned sales invoice to the second owner; the cancelled Swiss Carte Grise; and proof that EU taxes have been paid. Swiss collectors should note that we have been advised that the car would be eligible for a reduced import duty should it return to Switzerland as it was previously registered there.

In 2002 the car was purchased at auction by the immediately preceding (third) owner, a Swiss-based private collector, and treated to a thorough service by Markus Scharhorst in Toffen (Berne) immediately after acquisition. The Mercedes was used for some memorable Alpine tours, coping admirably with high-altitude passes such as the Simplon, Saint Gotthard and Nufunen, the second highest pass in Switzerland. While in the preceding owner's care the car was driven to Germany and serviced there by his mechanic, a member of the Mercedes-Benz Veteranen Club, receiving a full service, carburettor set up, new voltage regulator and battery, new steering damper and a full set of new whitewall tyres. Purchased by the vendor in 2006, the Mercedes has resided since in his impressive private collection and has seen very limited use. It is presented in remarkably original condition, featuring the nicely patinated interior and good hood.

Prohibitively expensive when new, these cars have a dedicated following and, being much rarer than both the 300 SL Gullwing and Roadster, represent a potentially sound investment as well as affording their fortunate owners enjoyable motoring in matchless style.