LONDON.- On 30 April Christie’s South Kensington presents a sale of European Noble & Private Collections, which brings together an impressive selection of works of art all linked by noble and private provenance. The sale celebrates the collecting traditions of aristocratic dynasties across Europe, exploring the development of styles and tastes, ranging from Old Masters and 19th century paintings to furniture, European and Chinese works of art and porcelain to books, tapestries and silver. Leading the sale is a remarkable town coach made by Royal coachbuilder Carl Heinrich Gläser (1831-1903), commissioned by the Royal House of Saxony and proudly bearing the family’s coat-of-arms (estimate: £20,000-40,000). The auction also features a collection offered by the descendants of His Royal Highness Prince Ferdinand of Bavaria, Infante of Spain (1884-1958), which includes Royal portraits, porcelain, furniture and bronzes. Further highlights include a striking full-length Portrait of a lady by Benois-Charles Mitoire (estimate: £25,000-35,000) which is offered by descendants of Don Mariano Maldonado y Dávalos, 7th Count of Villagonzalo (1851-1901), two portraits from the collection of HRH Prince Henry, the Duke of Gloucester (1900-1974) and a large collection of arms and armour from Blair Castle in Scotland, presented for sale by The Blair Charitable Trust. With estimates ranging from £500 to £40,000, the sale provides an opportunity to acquire remarkable pieces with exceptional provenance, and the chance to start or to continue a new collecting legacy.

THE PROPERTY OF THE ROYAL HOUSE OF SAXONY, HOUSE OF WETTIN A. L. (ALBERTINE LINE)

The Property of the Royal House of Wettin includes striking 18th and 19th century furniture, exquisite monogrammed table linen and, leading the section, an impressive town coach embellished with the coats-of-arms of the House of Wettin (estimate: £20,000-40,000). The carriage was almost certainly commissioned by King Johann of Saxony (1801-1873) in 1870 for use at one of the Dresden Royal residences, supplied by the Dresden-based coachbuilder Carl Heinrich Gläser, the same year he received his Royal appointment. Records state that the Gläser Company supplied the Royal house with one hundred and twenty-five carriages and seven sleighs, and records in the Dresden State Archives (Hauptstaatsarchiv, Dresden) list that two ‘Berline’ carriages were supplied in 1870, one of which is offered in this sale. From the mid-18th century the Royal carriages were kept at the Stallgebäude, or Royal stables, close to Residenzschloss in the centre of Dresden, until they were put on public display in 1876 in the newly created Historisches Museum, despite still being used by the Royal family. After the dissolution of the German monarchy in 1918 fifteen of the carriages, including this one, became the property of the Dresden State Art Collection (Staatliche Kunstsammlungen Dresden). In spite of the concentrated Allied bombing campaign inflicted on Dresden during the Second World War, miraculously, very little of the collection was damaged. In 1949 with the creation of the German Democratic Republic the collection was seized and transferred into the State collection where this coach has remained ever since. The works offered for sale from this collection, including the carriage, were restituted to the Royal House of Wettin A.L. from the Free State of Saxony in 2014, and present a unique opportunity to purchase works of art commissioned by this distinguished noble family for the first time.

PROPERTY FROM THE DESCENDANTS OF HRH PRINCE FERDINAND OF BAVARIA, INFANTE OF SPAIN (1884-1958)

When the engagement of the Wittelsbach Prince Ferdinand of Bavaria to his first cousin, Infanta Doña María Teresa, was announced the Prince declared his loyalty to Spain over Saxony and was granted the title Infante of Spain. The collection of miniatures, porcelain, 19th century furniture and works of art offered by the descendants of Infante Ferdinand evokes the history and grandeur of this European dynasty and the palaces in which he and his wife lived, both in Germany and Spain. Highlights include the veil worn by Infanta María Teresa at her wedding (estimate: £3,000-5,000), 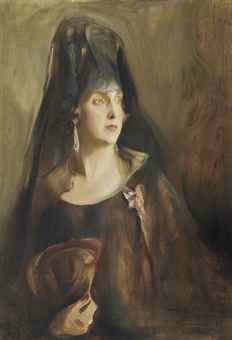 and Philip Alexius de László’s preparatory oil sketch of Queen Victoria Eugenia of Spain (estimate: £10,000-15,000). The sketch presents the Queen in traditional formal dress, worn for official ceremonies and religious events. De László spent seven weeks in the spring of 1927 staying at the Royal Palace in Madrid, where he completed thirteen portraits of King Alfonso XIII, his consort Queen Victoria Eugenia, and their children. The artist often formed close friendships with his sitters and recalled his time in Madrid fondly: “The Queen spent hours and hours in my studio and discussed art with the competence of an aesthete. Life in the Palace is infinitely pleasant and harmonious.”

Studio Inventory, p. 11 (61): Painted in Madrid, the first study for a large portrait.

Notes: De László spent seven weeks in the spring of 1927 staying at the Royal Palace in Madrid, where he completed thirteen portraits of King Alfonso XIII, his consort Queen Victoria Eugenia, and their children. In this preparatory oil sketch the Queen is depicted in traditional formal dress, worn for official ceremonies and religious events. It references Francisco Goya’s portrait of Doña Isabel de Porcel, which de László would have seen, having been acquired by the National Gallery, London, in 1896. The finished portrait, the artist’s fifth of the sitter, is now in the collection of the Prado Museum, Madrid.

De László often formed close friendships with his sitters and recalled his time in Madrid fondly: “The Queen spent hours and hours in my studio and discussed art with the competence of an aesthete. Life in the Palace is infinitely pleasant and harmonious. I worked for five to six hours a day, and, before I left, at the request of the Royal Family, I organised an exhibition of the twenty-three paintings I made during the trip, an exhibition at the Palacio de Biblioteca y Museos. The Queen and Queen Mother came personally to open the private view.”

Princess Victoria Eugenia (1887-1969) - ‘Ena’ - was the youngest granddaughter of Queen Victoria, the only daughter of Prince Henry of Battenberg and his wife, Princess Beatrice. She married King Alfonso XIII in 1906. Their great-grandson is King Felipe VI of Spain.

Further highlights from this collection include a set of twelve French armorial dishes, with the coat-of-arms for the House of Bavaria (estimate: £1,000-1,500).

THE PROPERTY OF THE LORD BADEN-POWELL

Lord Baden-Powell (1857-1941) is best remembered today as the founder of the Scouting movement, however, he first became famous for leading a group of eight army officers and raising a force of six hundred untrained irregulars, fifteen hundred Africans and eight hundred civilians to defend the town of Mafeking in South Africa in the first phase of the Second Anglo-Boer War. After war was declared on 4 October 1899, Mafeking was surrounded by seven thousand Boers. Baden-Powell and his small force successfully held Mafeking, and its relief on 16 May 1900 passed into folklore. The six swords offered in the sale were presented to Major-General Baden-Powell in recognition of his heroic efforts to defend Mafeking (estimates range from £1,000 to £10,000).

Blair Castle, Blair Atholl is the seat of the earls and dukes of Atholl, a Scottish family whose noble title dates back to the mid-15th century. Over nineteen generations the Stewarts and Murrays of Atholl have been adventurers and politicians, Jacobites and Royalists, entrepreneurs and agriculturists, soldiers and scholars. Offered for sale by the Blair Charitable Trust is a group of artworks that show the wealth of collecting tastes running through successive generations of earls and dukes, presenting the opportunity to purchase a selection of rare books from the impressive library wing built by the 2nd Duke of Atholl that explore a breadth of themes, from architecture to exploration and mathematics. These are offered alongside Old Master paintings, European and Asian works of art, and a collection of arms dating from the 16th to the 19th centuries, including a very rare pair of ‘Flintlock’ air pistols circa 1770 (estimate: £15,000-25,000). Don Mariano Maldonado y Dávalos, 7th Count of Villagonzalo, served as Spanish ambassador to Tsar Nicholas II (1893-97). During his time in office in St Petersburg he established a close relationship with the Tsar and is mentioned in the Tsar’s diaries. He was awarded the Imperial Order of St Alexander Nevsky in 1899. Amongst the works offered by the descendants of Count Villagonzalo is a striking full-length portrait of a lady by Benois-Charles Mitoire, an early example of his oeuvre (estimate: £25,000-35,000). The richly embroidered shawl worn by the sitter suggests Russian origins, yet the landscape is not Russian. Mitoire was French by birth, but became a Russian citizen in 1806 and in 1813 he became a member of the Imperial Academy of Art, St Petersburg, specialising in portraits and genre scenes.

Notes: Although French by birth, Mitoire became a Russian citizen in 1806. In 1813, he became a member of the Imperial Academy of Art in St Petersburg, specializing in portraits and genre scenes. There are speculations that Mitoire planned to leave Russia in 1818 and sold all his painting at auction. However, portraits in the State Hermitage and Pavlovsk Museum, Saint Petersburg, circa 1825, imply that the artist remained in Russia until then, or at most left for a short break in 1818 (see The State Russian Museum, Painting, Catalogue, St. Petersburg, 1998, p. 76).
The half-length Portrait of Countess Yulia Samoilova held in the State Hermitage, circa 1825, shows the sitter in a similar posture and costume as the present lot. Both sitters wear a long, high-waisted dress with puffed sleeves and lace around their shoulders, short strings of pearls around their necks, with their hair loosely tied. The richly embroidered shawl worn here suggests Russian origins for the present sitter.
The State Hermitage holds four half-length portraits by Mitoire. Other portraits by Mitoire are in the State Museum of Fine Art, Moscow, and the Rumyanstev Museum, Moscow. The present lot is a striking full-length, early example of his oeuvre.

Presented for sale from the collection of HRH Prince Henry, the Duke of Gloucester is a pair of impressive full-length portraits depicting King George III and Queen Charlotte, both dressed in robes of state, by a follower of Sir Joshua Reynolds (estimate: £15,000-25,000).

HRH The Prince Henry, Duke of Gloucester was the fourth child and third son born to TRH The Duke and Duchess of York (later to become George V and Queen Mary) and thus was styled HRH Prince Henry of York from birth. His father George V created him HRH Duke of Gloucester, Earl of Ulster and Baron Culloden on 31 March 1928. He was devoted to the army, attending Royal Military College, Sandhurst and serving with the 10th Royal Hussars. He married Lady Alice Christabel Montagu Douglas Scott, sister of one of his best friends, on 6 November 1935 and had two sons: Prince William (1941-1972) and Prince Richard of Gloucester, the present Duke of Gloucester (1944-). Between 1944-1947 the Duke served as Governor-General of Australia. On their return to Britain the Duke and Duchess resided at 18th century manor house Barnwell Manor, Northamptonshire, whilst also retaining an apartment at Kensington Palace. The Duke was the last surviving child of King George V and Queen Mary. He died on 10 June 1974. Christie’s King Street was proud to offer an impressive collection from the Estate of HRH The Prince Henry, Duke of Gloucester, KG, KT, KP, 26 and 27 January 2006.