An extremely rare and superbly enamelled pair of Famille-Rose 'Peach' bowls, Marks and period of Yongzheng

An extremely rare and superbly enamelled pair of Famille-Rose 'Peach' bowls, Marks and period of Yongzheng each exquisitely potted with deep rounded sides resting on a short foot, superbly enamelled in vivid tones of rose pink, shades of green, yellow, iron-red, brown and black with two varieties of flowering and fruiting peach branches issuing from the foot and extending across the exterior and over the rim onto the interior, one branch with a brownish-black bark and bearing white double blossoms, the other with a brown bark and issuing five-petalled rose-pink blossoms, both with large ripe fruit delicately coloured in shaded tones of yellowish-green to subtle raspberry-pink, depicted in iron-red with two bats on the exterior and three on the interior forming the wufu, the base inscribed in underglaze blue with a six-character reign mark within a double-circle.

Painted with auspicious symbols rooted in China’s antiquity and coveted by the Yongzheng Emperor (r. 1723-35), created by the imperial kilns to celebrate an imperial birthday, in a palette inspired by Jesuit technology, this extremely rare and immensely elegant pair of peach bowls is deeply anchored in Chinese history and represents a zenith of aesthetic and technological achievement of court art in China.

The Yongzheng Emperor was a firm believer in portents of good fortune. Having ascended the throne under somewhat nebulous circumstances, the legality of his succession was persistently questioned, which made him more receptive than any other Qing (1644-1911) emperor for auspicious symbolism. Many aspects of the design on these exquisite bowls are very auspicious and suggest that they may have been intended to celebrate an imperial birthday.

Peaches are perhaps China's most auspicious fruit, having a long tradition as omens of longevity and harbingers of happiness. Six is a propitious number, and flowering peach branches are believed to ward off evil. The poet Tao Qian (365-427) tells of a fisherman who, when following the source of a stream in a peach orchard – 'Peach Blossom Spring' – through a crevice in a rock, discovered a paradisiacal world. A peach orchard is also the setting for the oath of brotherhood sworn by the three main protagonists of the novel Romance of the Three Kingdoms, including the Han dynasty (206 BC – AD 220) general Guan Yu who was deified and worshipped as Emperor Guan or God of War for near two millennia. The ‘peaches of immortality’, which are said to grow in the garden of Xi Wang Mu, the Queen Mother of the West, flower only once every three thousand years and to take three thousand years to bear fruit and another three thousand years to ripen, and are then offered in a banquet to the immortals. Dongfang Shuo, a witty and clever Han dynasty scholar, who became the hero of many legends, is reported to have stolen peaches of immortality and thus to have become immortal. And the same feat is told of the cunning Monkey King Sun Wukong, hero of the novel Journey to the West, who subsequently was recruited by Guanyin (Bodhisattva of Compassion) to accompany the Tang dynasty (618-907) monk Xuanzang on his trip to India to obtain Buddhist sutras.

The five red bats painted on the bowls are among the most popular themes in Chinese decorative arts. Red bats provide a rebus or visual pun for vast good fortune, and five bats provide a rebus for wu fu, the Five Blessings of longevity, health, wealth, love of virtue and a good end to life. Those bats painted upside down provide a further rebus, since the word for ‘upside down’, dao, is pronounced similarly to the word for ‘arriving’, and thus an upside-down bat signifies 'happiness is arriving'.

The Yongzheng Emperor was clearly attached to these stories, as he had himself painted as the recipient of such good luck in an album leaf that shows him in possession of a peach of immortality, with a monkey hanging from a nearby tree (fig. 1), while in another leaf from the same album he is depicted gazing at a water fall with a bat flying overhead. 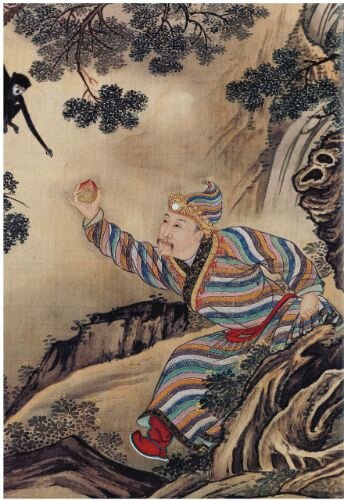 Anonymous, A Life Portrait of the Yongzheng Emperor, colour on silk, album of 13 leaves, Qing dynasty, Yongzheng period, Palace Museum, Beijing. After: The Complete Collection of Treasures of the Palace Museum:Paintings by the Court Artists of the Qing Court, Hong Kong, 1996, pl. 18.

While he had peaches and bats represented in all possible media, the peach design was perhaps best suited to the newly developed fencai (famille-rose) palette for porcelain with its pastel shades of pink, yellow and green. It began to be used, however, in the imperial palace workshops in the Forbidden City, on enamelled metal vessels. A fruiting and flowering peach tree had already been used once in the Kangxi period (1662-1722) to decorate a copper-bodied vase (fig. 2). In the Yongzheng period a copper cup and saucer were enamelled in the imperial Enamelling Workshops with peach-and-bat designs related to those on the present bowls (fig. 3), and an enamelled copper water pot was formed as a peach branch with two fruit and painted with bats included in China. The Three Emperors 1662-1795, Royal Academy of Arts, London, 2005-6, cat. no. 295. 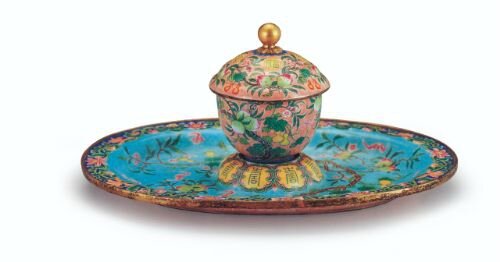 The transfer of the motif onto porcelain probably took place under the auspices of Tang Ying (AD 1682-1756), the Yongzheng Emperor's trusted official and the greatest porcelain superintendent in Chinese history. The soft colouration of fruiting and flowering peach branches made this design ideal to show off the new famille-rose palette. It was inspired by enamels introduced to China by Jesuit missionaries who arrived at the imperial court during the late Kangxi period and adapted at Jingdezhen in the years preceding the Yongzheng reign. The wide range of pastel shades of famille-rose from a fresh green over an opaque white to a pale rosé tone and eventually a deep pink was never otherwise displayed more impressively. It was only in the Yongzheng period that the porcelain painters could begin painting nature scenes in naturalistic – if idealized – colours, as perfectly demonstrated by the present pair of bowls.

The peach-and-bat design was also used for enamelling porcelains at the imperial workshops in the Forbidden City in Beijing. Compare a pair of Yongzheng falangcai porcelain bowls in the National Palace Museum, Taipei, also painted with peach trees and five bats, but in a less pronounced design (fig. 4). A feature of these bowls favoured by the Yongzheng Emperor and new to his reign period, but unique to the imperial porcelain workshops at Jingdezhen, was the difficult and sophisticated technique of painting branches that flow over the rim, an artistic device referred to as changzhi (long branch), a homophone of the phrase “Eternal Governance”. A particular request by the Yongzheng Emperor preserved in the records of the Zaobanchu, the workshops of the Imperial Household Department, reflects his interest in the ‘long branch’ design: “19th day, 4th month, Yongzheng 9th year (1731)…His Majesty ordered to take glazed and unglazed porcelain and paint on it the enamelled designs of Everlasting Tranquillity and Eternal Governance…” (Feng Xianming, Annotated Collection of Historical Documents on Ancient Chinese Ceramics, Taipei, 2000, p. 222).

With such a wealth of symbolic meaning dear to the Emperor, these bowls with the peach and bat combination were probably produced for an imperial birthday. This view is supported by two Yongzheng court paintings: a landscape by Chen Mei (1694?-1745) with a large number of bats in the sky, inscribed Ten Thousand Blessings (bats) to the Emperor and presented to the Yongzheng Emperor on his birthday in the 4th year of his reign (1726) (China. The Three Emperors 1662-1795, op.cit., cat. no. 270); and another, by court artist Jin Jie (fl. 18th century), depicting three elderly men in a landscape with red bats, titledFlying Bats Filling the Sky (i.e. Infinite Blessings) (fig. 5). Porcelain vessels produced for the occasion of celebrating imperial birthdays were made in very small numbers. Although the peach-and-bat design on the present bowls represents one of the best-known Yongzheng porcelain patterns, this is due more to its endearing character than a profusion of extant examples. Comparable bowls of the Yongzheng reign, although frequently illustrated, are surprisingly rare. Altogether only about five pairs of peach bowls of Yongzheng mark and period painted with this ‘long branch’ or ‘Eternal Governance’ design, appear to be recorded.

A pair formerly in the Eisei Bunko, Tokyo, an art collection with its origins in the Nanboku-cho period (1336-92) formed by the Hosokawa family, one of the top daimyo clans in Japan, is now separated: one bowl entered the Meiyintang collection and was sold in these rooms on 5th October 2011, lot 16, the other, still in the Eisei Bunko today, is illustrated in Sekai toji zenshu/Ceramic art of the world, vol. 12:, Tokyo, 1956, col. pl. 11. Another pair in the Baur collection, Geneva, is illustrated in John Ayers, The Baur Collection Geneva: Chinese Ceramics, Geneva, 1968-74, vol. 4, nos. A 594 and 595. A pair from the collections of Chen Rentao, Paul and Helen Bernat and T. Endo was sold in these rooms 15th November 1988, lot 44, and 29th April 1997, lot 401, and at Christie's Hong Kong, 29th May 2007, lot 1374, and is illustrated in Sotheby's. Thirty Years in Hong Kong, Hong Kong, 2003, pl. 326. This pair is now also separated and one was included in the Fiftieth Anniversary Exhibition: Twelve Chinese Masterworks, Eskenazi, London, 2010, cat. no. 11, while the other is in a private collection in Taiwan. Another pair was sold at Yamanaka & Co., London, 1938, and was included in their catalogue Chinese Ceramic Art, Bronze, Jade etc., no. 116, pl. 12 (illustrating one of the pair). Also known is one bowl from the Avery Brundage collection, in the Asian Art Museum of San Francisco, published in Terese Tse Bartholomew, Hidden Meanings in Chinese Art, Asian Art Museum, San Francisco, 2006, page 204, number 7.44.1.

One other related pair of different proportions, from the Allen J. Mercher and John M. Crawford, Jr. collections, was sold at Parke-Bernet, New York, 10th October 1957, lot 261, and in these rooms, 24th May 1978, lot 252. The design continued to be produced for the Qianlong Emperor, and a bowl of Qianlong mark and period is published in Soame Jenyns, Later Chinese Porcelain: The Ch'ing Dynasty (1644-1912), London, 1951, pl. LVI, fig. 2. The peach design is also seen on other porcelain vessels of the Yongzheng period, in very small numbers as well. Examples include the famous vase from the collection of the Hon. Ogden R. Reid, sold in these rooms, 7th May 2002, lot 532 and donated in 2004 to the Shanghai Museum by Dr. Alice Cheng (fig. 6); a covered box formerly in the Van Slyke and Meiyintang collections, sold in these rooms 8th April 2013, lot 3036; large dishes including one from the collection of J. Pierpont Morgan, sold in these rooms, 29th April 1997, lot 400, and one in the Palace Museum, Beijing, see China: The Three Emperors, op.cit., cat. no. 181. A group of smaller dishes is discussed in An Exhibition of Important Chinese Ceramics from the Robert Chang Collection, London, 1993, cat. no. 92; see also an example in the British Museum, London, illustrated in Oriental Ceramics, The World's Great Collections, vol. 5, New York, 1981, col. pl. 67; and another dish illustrated in Denise Patry Leidy, Treasures of Asian Art. The Asia Society’s Mr. and Mrs. John D. Rockefeller 3rd Collection, New York, 1994, pl. 198. Also known are peach vases in tianqiuping globular form, such as a piece in the Palace Museum, Beijing, in Porcelains from the Qing Dynasty Imperial Kilns in the Palace Museum Collection, Beijing, 2005, vol. 1, part 2, pl. 76; and another exhibited in The Barbara Hutton Collection of Chinese Porcelain, Honolulu Academy of Arts, Honolulu, 1956-7, cat. pl. XV, and sold in our London rooms, 6th July 1971, lot 259, and later in these rooms, 30th April 1996, lot 498.