Hong Kong - The vase is an outstanding example of the innovation in form and experimentation with decoration which defined the artistic output of the Qing dynasty during the 18th century, and is estimated at HK$6,000,000-8,000,000.

The form of the vase demonstrates a boldness and invention in shape and proportion, but also shows a continuation from the vases of the preceding Yongzheng reign period (1723-1735), themselves inspired by the archaic bronze vases of the late Spring and Autumn period and Han dynasty in the 6th and 2nd centuries B.C. The influence of the ancient world in the present vase follows the instruction of the Qianlong Emperor to 'restore ancient ways' – the sincerity, simplicity and joyous exuberance of the ancient world.

Archaic-inspired porcelain of the Qing dynasty reached its peak under the direction of Tang Ying (1682-1756), Superintendent of the Imperial porcelain works between 1728 and 1748. The innovations of this period included the experimentation with monochrome glazes and the playful manipulation of the porcelain to imitate various materials, including coral, silver, bronze, wood and bamboo.

The present vase is glazed with 'teadust,' a crystallised glaze which reached its height of popularity during the Yongzheng and Qianlong reign periods. Composed of yellow and olive specks which together resemble tea dust, it produced a diverse range of tones with different firing conditions. The combination of teadust monochrome glaze with famille rose decoration as seen on the present vase is extremely rare.

The famille rose decoration of floral blossoms, including tree peony, rose, aster, and pink and lingzhi fungus, is enamelled on four circular medallions on the sides of the vase. The peony, known as 'The King of Flowers,' represents spring, while the lingzhi fungus represents the wish for longevity. Together, they are symbolic of renewal.

It is a vase of innovative form and complex design, which captures the opulence of the Qing dynasty and the virtuosity of the master potters reaching its peak during the celebrated Qianlong reign period.

Asaph Hyman, Director of Chinese Art, commented: 'We are delighted to offer this exceptionally rare and fine example, demonstrating the innovation and opulence of the Qianlong reign period. It has been treasured in a distinguished English private collection and it is a privilege to bring it to light for the first time in decades.' 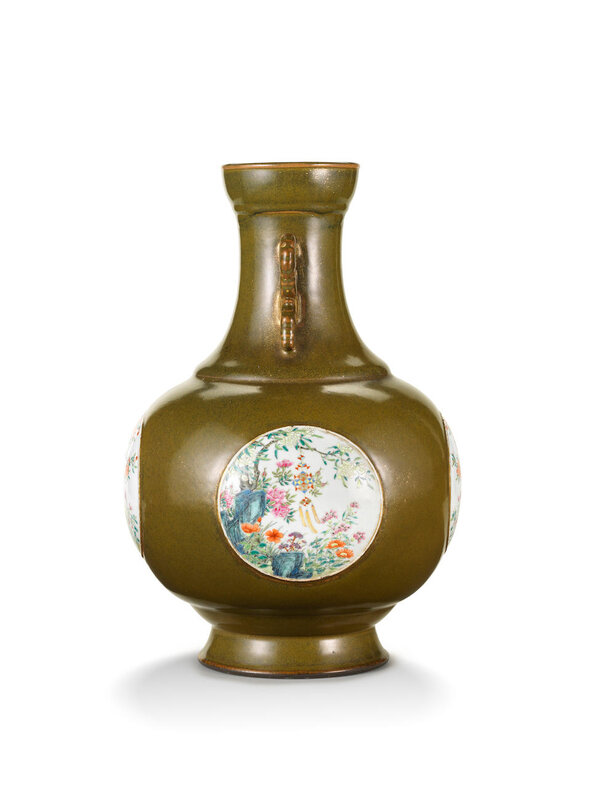 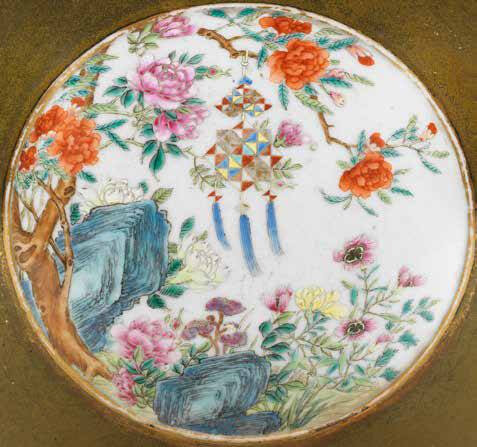 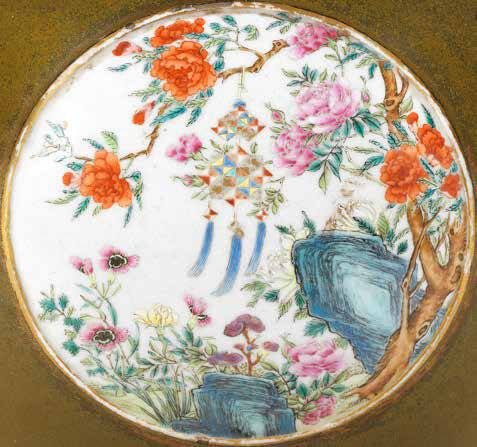 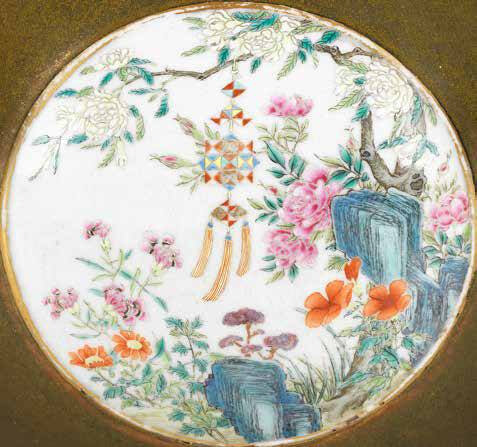 The bulbous body finely enamelled with four medallions, one pair decorated in mirror image with a tasselled harlequin lantern hanging from a flowering peony branch issuing from rockwork above buds of aster, lingzhi fungus and other blossoms, the other pair also in mirror image and similarly enamelled with a tasselled harlequin lantern suspended from tree peony above further blossoms and lingzhi sprays, the medallions each encircled by a gilt border and reserved against an even teadust-glazed ground finely speckled with flakes of gilt, the moulded flaring neck flanked by a pair of reticulated mythical beast handles edged with gilt, the underside also glazed with gilt speckles.

The Property of a Lady

Note: The magnificent famille rose teadust-ground vase is extremely rare and no other example appears to have been published.

The vase is an outstanding example of Qing dynasty innovation and experimentation during the 18th century in form, glaze and decorative design.

The form of the vase, whilst demonstrating boldness and confidence in form and size, is also a continuation of monochrome vases of the preceding Yongzheng period (1723-1735), which were in turn inspired by bronze archaic vases of the late Spring and Autumn period and Han dynasty (6th to 2nd century BC): see for example a smaller celadon-glazed vase, Yongzheng mark and period, sold at Sotheby's Hong Kong on 8 October 2010, lot 2671. The archaic inspiration of the present vase follows the Qianlong Emperor's call to 'restore ancient ways', referring to the view of ancient culture as having intrinsic qualities of sincerity, simplicity and happy exuberance. For this purpose the Emperor instructed the court to collect drawings of antiquities, such as the Xi Qing Gu Jian (Catalogue of Xiqing Antiquities), which were in turn provided to the craftsmen for inspiration. See Chang Li-tuan, The Refined Taste of the Emperor: Special Exhibition of Archaic and Pictorial Jades of the Ch'ing Court, Taipei, 1997, pp.49-50.

Innovative and archaic-inspired porcelain production reached its peak during the Qing Dynasty, under the direction of Tang Ying (1682-1756) who was sent by the imperial court to Jingdezhen as Superintendent of the Imperial porcelain works, circa 1728-1748. An important element of this innovation was achieved through experimentation in monochrome glazes and the playful simulation using porcelain to imitate a variety of materials such as coral, silver and bronze, wood and bamboo. The glaze on the present vase, known as 'teadust' is a crystallised glaze, which reached its maturity during the Yongzheng and Qianlong periods. Known as Chang guan (Factory glaze) in Qing texts, it is composed of yellow and olive specks resembling the tea dust. Due to varied firing conditions, a diverse range of tones results, with a subsequent flurry of names such as 'eel yellow', 'crab-green' and 'snake-skin green' and others. The Collection of the National Palace Museum, Taipei.

The four circular medallions, one on each side, divided to two pairs each in mirror image of the other, are vibrantly decorated in the famille rose palette with floral blossoms including tree peony, rose, aster, pink and lingzhi fungus. The peony known as the 'King of flowers' represents Spring and the lingzhi fungus the wish for longevity; combined they are symbolic of renewal.

The unusual harlequin design of tasselled lanterns can also be seen on a rare pair of famille rose yellow-ground moonflasks, Qianlong seal marks and of the period, decorated with dragon boats, sold at Sotheby's Hong Kong on 11 April 2008, lot 2821.

The vase of bold proportions, imposing size and complex decorative and technical design, is manifestation of Qing Dynasty opulence and virtuosity achieved by the master-potters during the Qianlong period for the pleasure of the emperor and the Imperial Court.