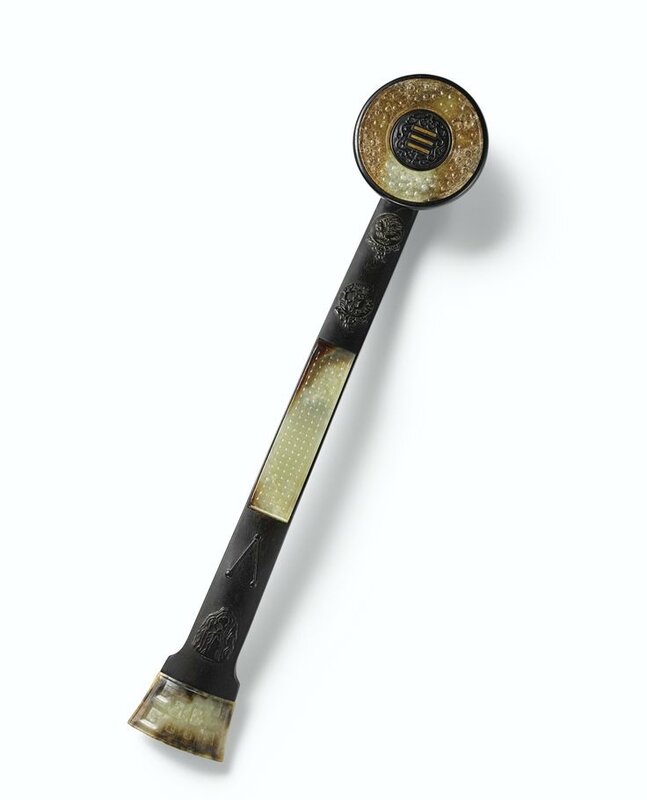 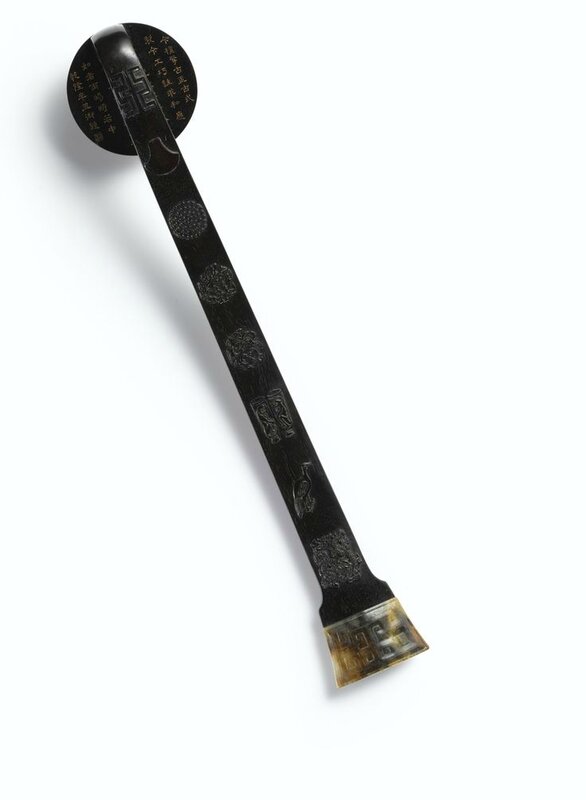 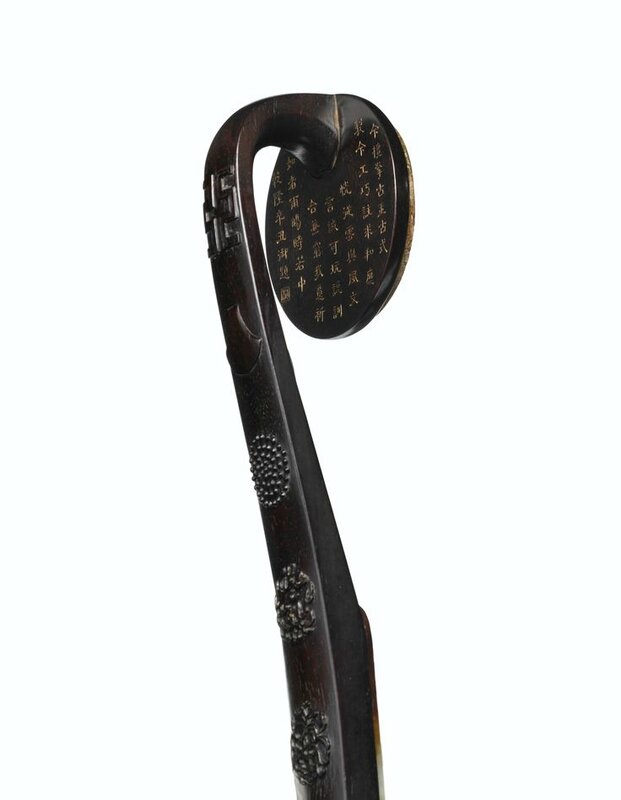 the elegantly curved shaft of rounded rectangular section, finely mounted with three Han dynasty jades, including a scabbard chape for the terminal symbolising the Earth, a scabbard slide for the handle, a circular sword pommel for the head symbolising Heaven, pierced in its centre to reveal the wood carved and gilt with a trigram flanked by two archaistic scrolled dragons, representing the Emperor, finely carved on the upper side with four roundels of the Twelve Symbols, including the Mountains, the Stars, the Moon and the Sun, the underside carved with the eight remaining symbols, the Dragons, the Pheasant, the Goblets, the Pondweed, the Fire, the Rice, the Axe and the figure Ya, the underside of the head carved and gilt with a six-column inscription followed by Qianlong xinzhou yuti, corresponding to the year 1781, the finely grained dark hardwood with a superb silky finish - 37.4 cm., 14 3/4  in.

Notes: Ruyi (‘as you wish’) sceptres were presented to the Emperor or other members of the imperial family as auspicious gifts to bring good fortune. The Qianlong Emperor is said to have been particularly fond of them, they are often mentioned in his writings and he even issued an edict "calling for the observance in the years to come of the presentation of ju-i sceptres by the courtiers to the imperial family on the occasion of a birthday or of new year" (Auspicious Ju-I Scepters of China,National Palace Museum, Taipei, 1995, p. 69).

The present sceptre, inlaid with three pieces of archaic jade, carved with the twelve auspicious symbols and inscribed with a poem composed by the Emperor, appears to be from the Qianlong Emperor’s personal collection and is probably the one depicted on a hanging scroll by Giuseppe Castiglione (1688-1766), Hungli Looking at Paintings, now in the Palace Museum, Beijing. The scroll shows an attendant standing next to the Emperor holding a wooden sceptre with a trigram at the top, surrounded by an inlaid piece of jade. No other sceptre of this type appears to be recorded. The inscription on the back of this sceptre renders Qianlong’s poem Ti tanzhi guyu ruyi (Inscribed on a ruyi of hardwood with ancient jades) and can be translated as follows:

New zitan holds an ancient jade;
In ancient form a new object is made.
With an artful inscription I seek a response,
As if following the clouds and winds.
Belles-lettres are truly to be savoured
Their explication to be endlessly pursued.
Such is the only wish I pray fulfilled
In the beautiful and auspicious weather. The poem praises the use of tan wood (zitan) with archaic jade, a harmonious blend that follows ancient styles. The Qianlong Emperor is known to have been a great admirer of archaic jades, whose collection surpassed that of any of his predecessors. Yang Boda mentions in ‘Jade: Emperor Ch’ien Lung’s Collection in the Palace Museum, Peking’, Arts of Asia, March/April 1999, p. 87, that the Qianlong Emperor's ‘unflagging exploration into the ancient texts as well as close observation of the huge imperial collection of archaic jades made him one of the most authoritative jade critics in history’. Among the examples of archaic bi from the imperial collection there is another disc decorated with a similar grain pattern of the Warring States period, see The Complete Collection of Treasures of the Palace Museum: Jadeware (I), Hong Kong, 1995, pl. 125; for an example of a similarly fashioned scabbard chape, see a piece with cloud design of the Warring States period, illustrated ibid., pl. 174. The National Palace Museum, Taiwan, also holds a redwood sceptre inlaid with archaic jades, see Auspicious Ju-I Scepters of China, Taipei, 1995, p. 107, pl. 34.

The trigram shown between two dragons at the head of the sceptre is one of the bagua (Eight Trigrams) used in ancient times for divination. Consisting of three unbroken lines, it represents the male principle (yang). The Qianlong Emperor, who was fond of symbols with archaic connotation, often used the combination of this trigram, which is called qian, with dragons,long, as a homophone of his reign name. The trigram flanked by two dragons appears very similarly on at least two circular seals used by the Qianlong Emperor, see Victoria Contag and Wang Chi-ch’üan, Maler- und Sammler-Stempel aus der Ming- und Ch’ing-Zeit, Shanghai, 1940, p. 581, no. 8 and p. 582, no. 18; one such seal can also be seen next to a calligraphy by the Qianlong Emperor, included in the exhibition The Life of Emperor Qianlong, Macao Museum of Art, Macao, 2002, cat.no. 41.

The ‘Twelve Ornaments’ carved on the front and reverse of our sceptre are otherwise found, for example, on robes reserved for the emperor’s own use; they appear also carved on a jade gui tablet illustrated in the Complete Collection of Treasures of the Palace Museum: Jadeware (III), Hong Kong, 1995, pl. 129.