WASHINGTON, DC.- One of the most beloved paintings in the National Gallery of Art's permanent collection, Young Girl Reading (c. 1770) by Jean-Honoré Fragonard, shows a young woman in profile, reading the book in her hand. It is now clear that a completely different face was painted underneath, that of an older woman looking out towards the viewer. Using groundbreaking imaging techniques and new art historical investigation, Yuriko Jackall, assistant curator of French paintings, John Delaney, senior imaging scientist, and Michael Swicklik, senior paintings conservator, all at the National Gallery of Art, recovered and reconstructed this first composition, a fully-realized, "lost" painting newly referred to as Portrait of a Woman with a Book.

Their research was sparked by the discovery, at a June 2012 Paris auction, of a drawing by Fragonard showing the Washington picture as a woman looking out at the viewer. The drawing further indicated that the Gallery's painting once belonged to a series of 18 so-called "fantasy figures," an ensemble painted for a single commission about which many details are still unknown. Today, these works have been dispersed among distinguished private collections and public institutions such as the Musée du Louvre, the Clark Art Institute, and The Metropolitan Museum of Art.

In the 1980s, x-radiography had indicated the presence of another composition beneath Young Girl Reading but many details including the extent to which the artist had altered his canvas remained unknown. In the last decade, innovations in imaging technologies have provided completely new ways to examine paintings. Using a diverse range of methodologies combining traditional high-resolution color imaging, digital x-radiography, and cross-sectional analysis with chemical information from Delaney's newly developed, high sensitivity, near infrared hyperspectral imaging (HSI) camera and x-ray fluorescence (XRF) scanning sensor, Jackall, Delaney, and Swicklik investigated the process by which Fragonard changed one composition into the other. The technology was developed recently at the Gallery as part of an ongoing initiative to create new analytical imaging tools for conservation led by Delaney. Funding was provided by the Andrew W. Mellon and Samuel S. Kress Foundations and a grant from the National Science Foundation to the Gallery and George Washington University (GWU). Image-registration algorithms designed by GWU's Murray Loew and his team aided in the reconstruction of the prior composition.

At crucial points in their work, Jackall, Delaney, and Swicklik relied upon the expertise of colleagues across the Gallery, particularly in the departments of science, conservation, and imaging and visual services. Swicklik, who had previously written a pioneering article on the use of varnish in French painting, was critical in making sense of Fragonard's painting technique. Jackall, an expert in 18th-century French painting, brought to the project an unusually deep network of contacts in France, having studied and worked there for a decade prior to her move to Washington, DC. In addition to conducting archival research, she consulted the Paris-based Fragonard specialist, Marie-Anne Dupuy-Vachey, one of the first to discover the drawing when it appeared at the Paris auction.

Moving forward on their research on the "fantasy figures" and Young Girl Reading, Jackall, Delaney, and Swicklik plan to investigate other works in Fragonard's series, in cooperation with institutions and individuals.

Young Girl Reading was a gift of Mrs. Ailsa Mellon Bruce in memory of her father, Mr. Andrew W. Mellon, in 1961. The Gallery owns 13 paintings, 21 drawings, and 17 prints by Fragonard.

The findings of Jackall, Delaney, and Swicklik, as well as Dupuy-Vachey's preliminary study of the place of the drawing in Fragonard's artistic practice (translated from the French by Jackall), appear in the April 2015 issue of The Burlington Magazine. 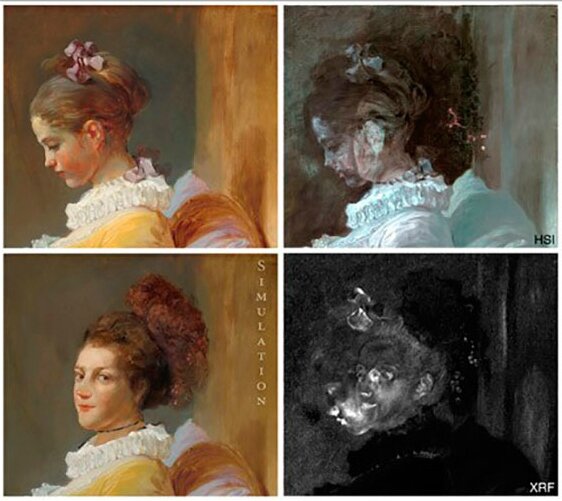 Details of Young Girl Reading, the near infrared hyperspectral image (HSI) and the x-ray florescence (XRF) scan for the element mercury (thought to show the presence of vermilion) are shown alongside a simulation of Portrait of a Woman with a Book, generated by cross-referencing various imaging techniques (simulated image by Becca Goodman and Denis Doorly).